I am a magazineaholic.  I am especially fond of the small, adorable ones sized almost like a journal or iPad mini.  The copies of British Vogue or British Glamour that you can find at select stores that are so convenient to take along on your daily travels.  I fell in love with them about ten years ago when everything British seemed different and interesting to me.  Fast forward ten years and (lucky for some people in this family) I am still quite fond of everything British.  We have just moved though…and so I’m purging a little.  Going through (seemingly) endless boxes led me to a small stack of Martha Stewart Food magazines, which, if you are a magazine hoarder like myself, you know are also quite small in size, which must be why I kept them.  Today was the perfect day to flip through a few and in doing so I found a recipe for Tortilla Pie.

Our family loves tortillas.  It seemed like an ideal dinner….but if I’m honest… it was mostly because we had all the ingredients in the house.  Simple, but a little time consuming to make, it was a hit with the kids.  The best part was that I was able to put it together during the afternoon while they were at school and then just pop it in the oven about 45 minutes before dinner time.

I started by cooking some chicken thighs.  While the meat was cooling I placed six plum tomatoes (halved), half an onion, 2 cloves of garlic (peels on) and two jalapeño peppers (seeded and insides removed) onto a sided baking dish where they were broiled until charred.  I am glad I did this.  I almost skipped the charring part because well you know how kids can be with ANYTHING blackened on their plates…but because this mixture was going to be blended after it was cooked I thought I’d hedge my bets.  And again….so glad I did.  The flavor that it adds to the dinner is amazing.  So yeah- they charred and then they got blended with a little bit of water and salt to make a very wet salsa.  Next twelve tortillas were cooked on a dry pan until golden on each side.

To put this tortilla bake together I used a round baking dish.  Four tortillas were stacked on the bottom followed by half of the cooled chicken which had been cut up.  A half a cup of cut (canned) jalapeños were sprinkled over the chicken followed by some of the salsa, scoops of sour cream and then some Monterey Jack cheese.  This was repeated entirely before the remaining four tortillas were placed on top with extra salsa, sour cream and cheese.  At this point I stuck ours in the fridge and pulled it out before dinner.  It was baked at 375 for 45 minutes and then placed under the broiler for about five minutes to brown up the top. 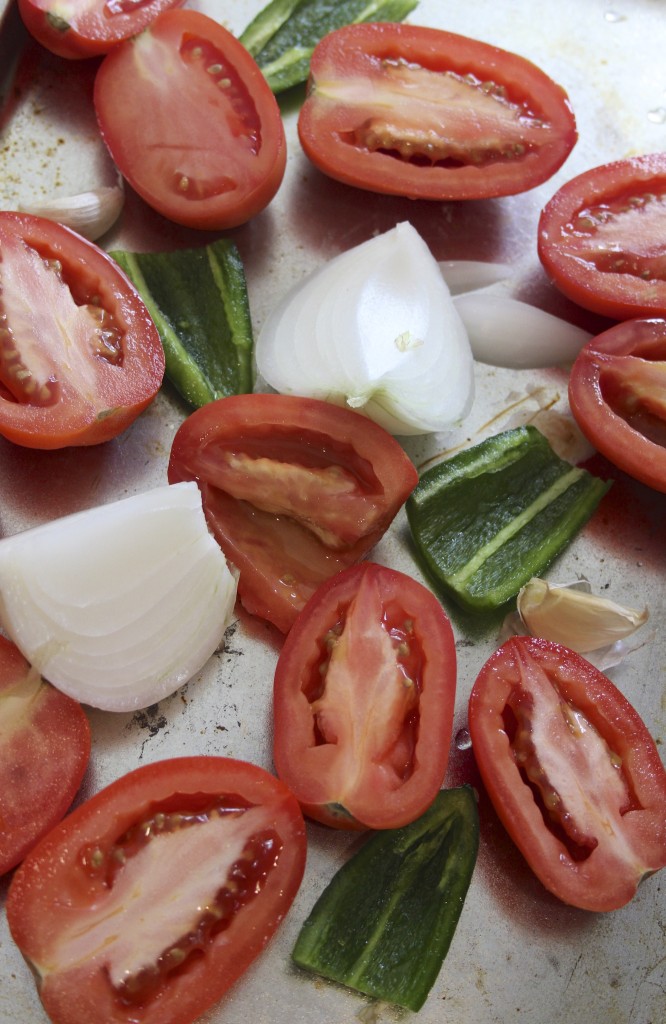 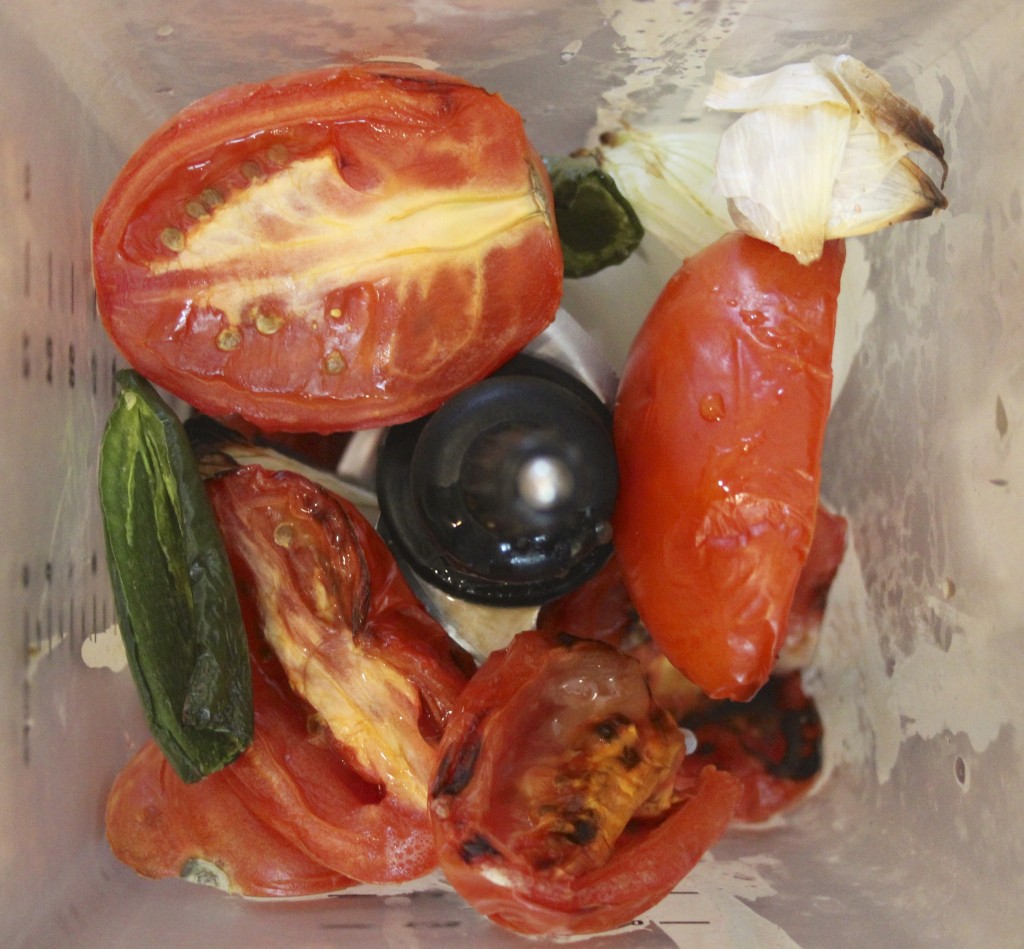 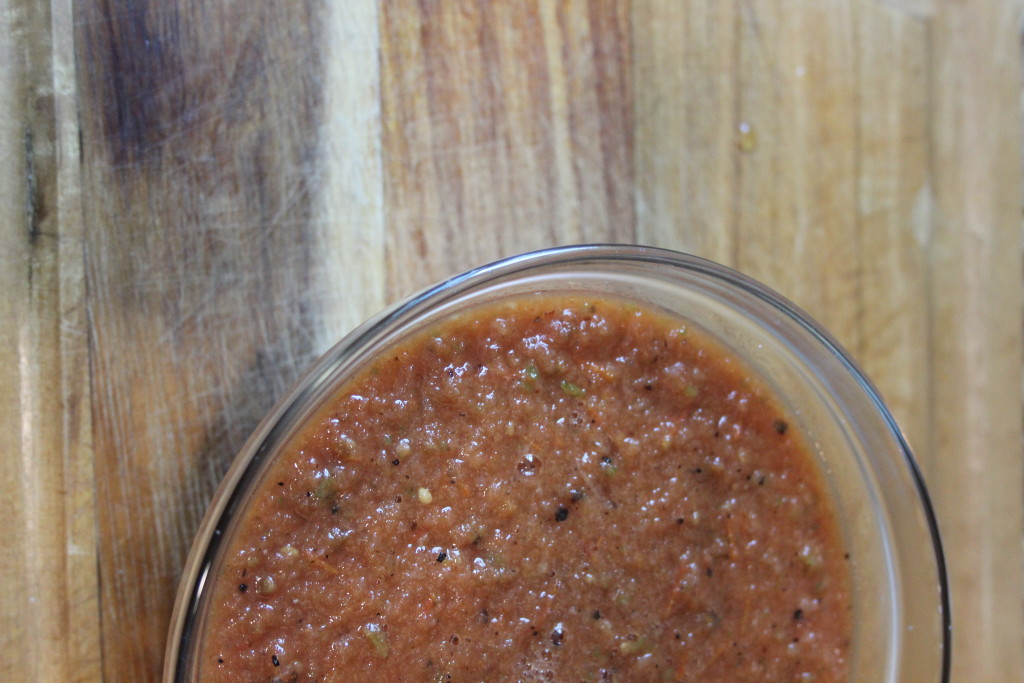 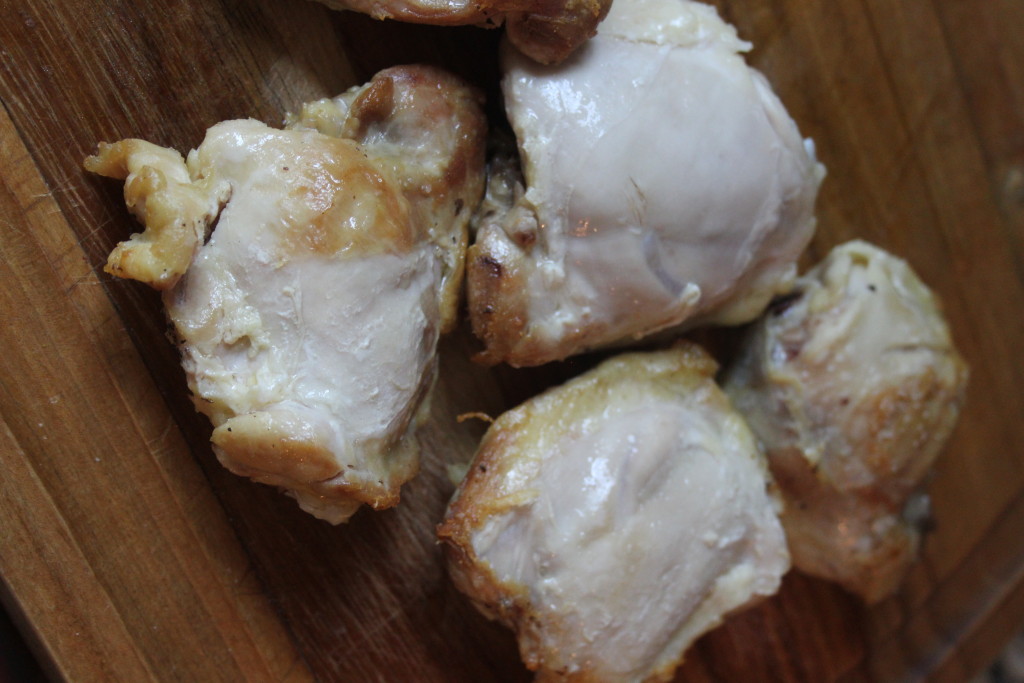 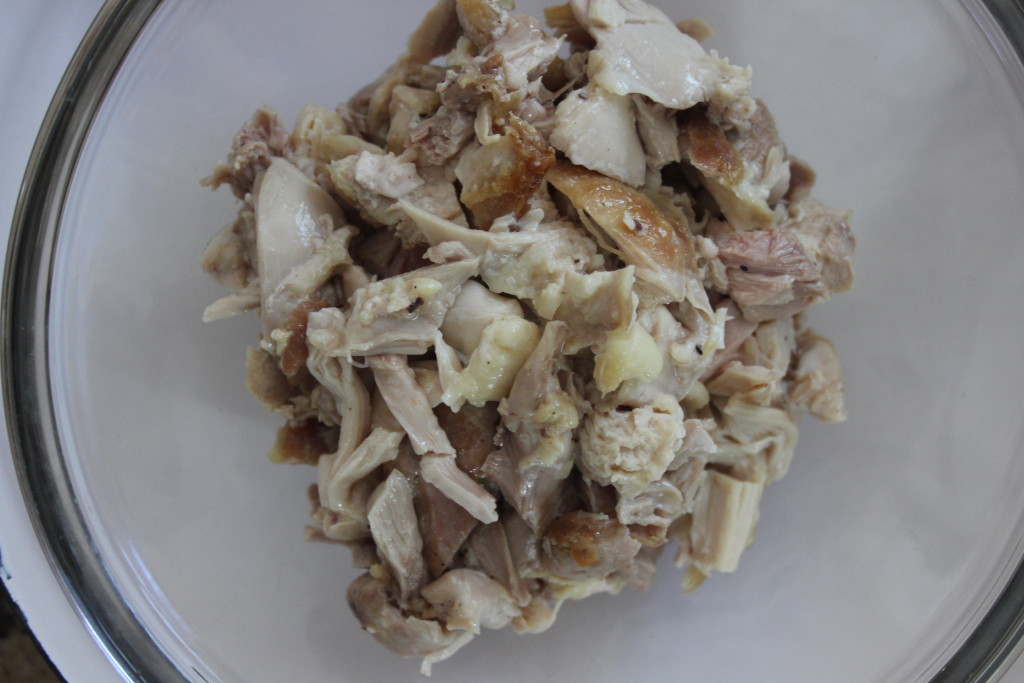 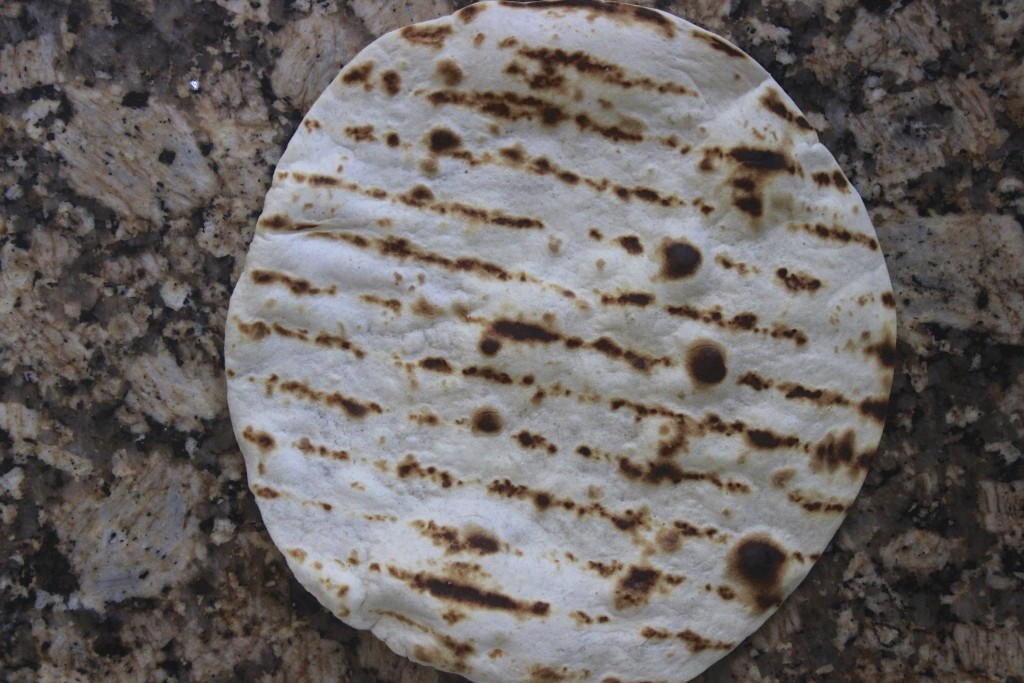 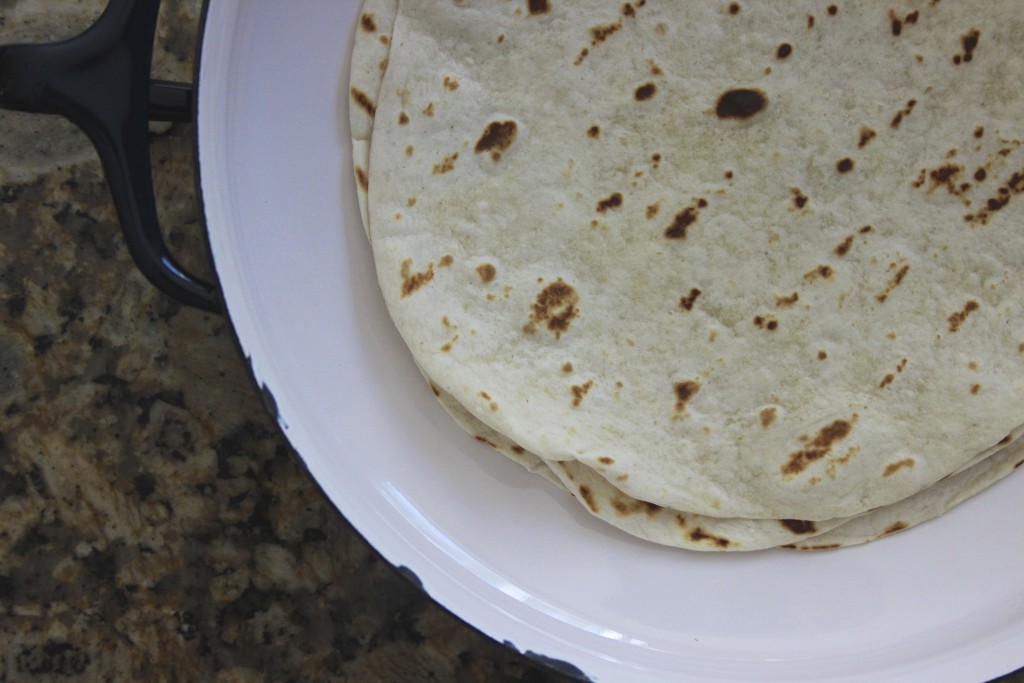 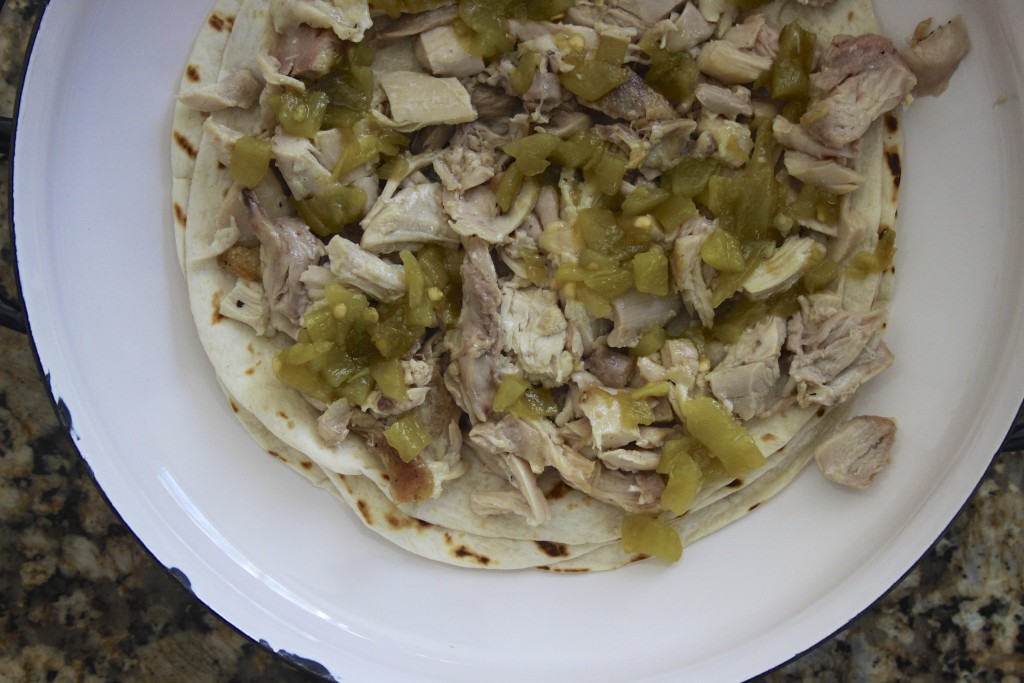 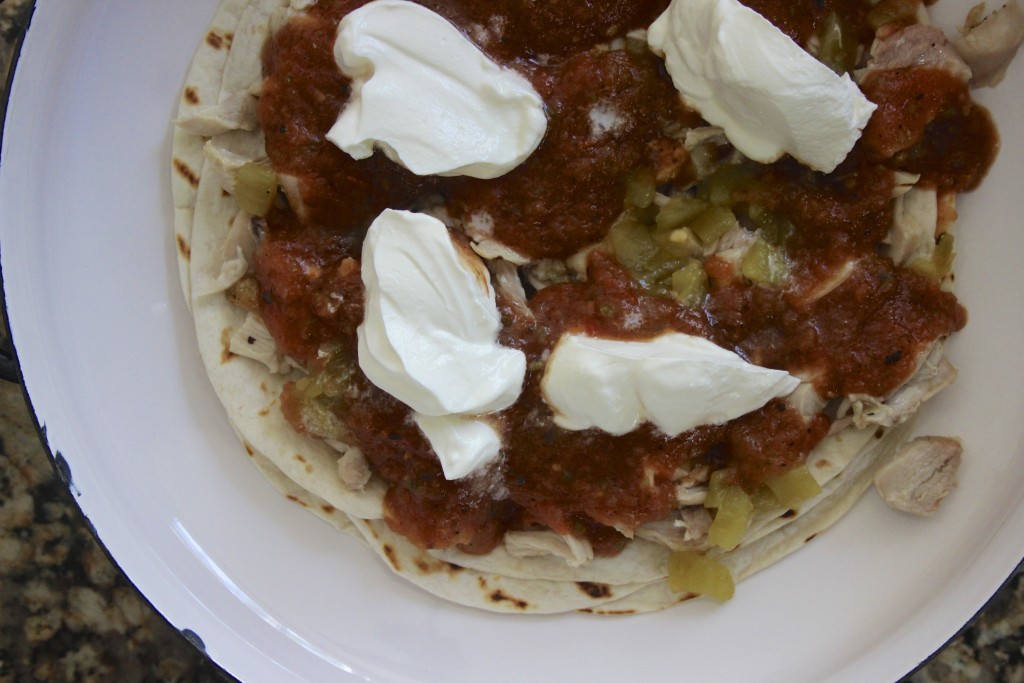 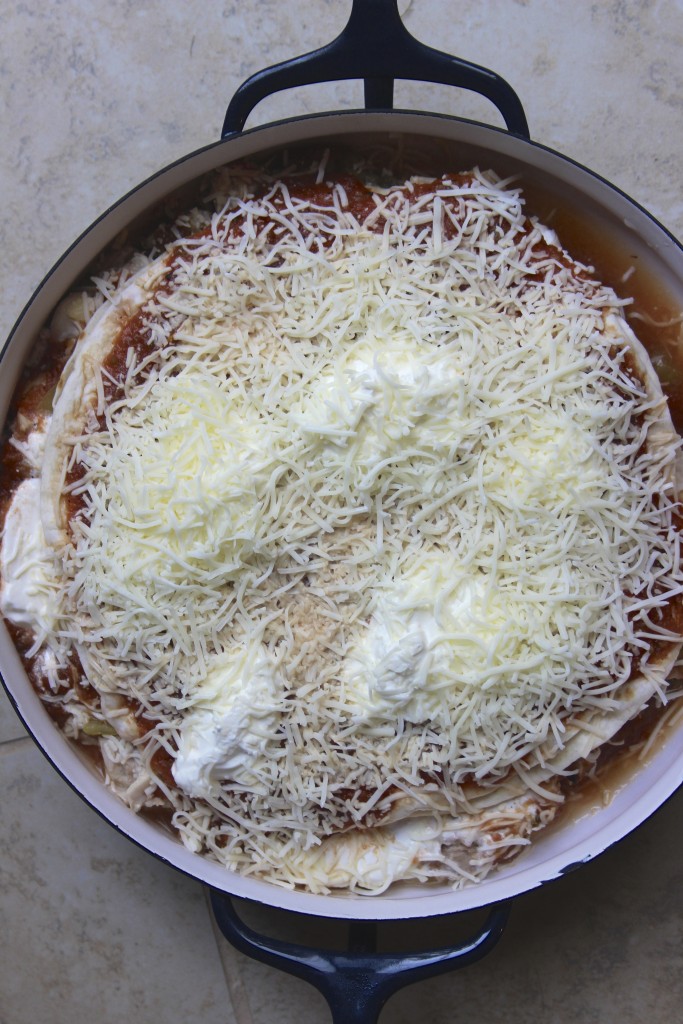 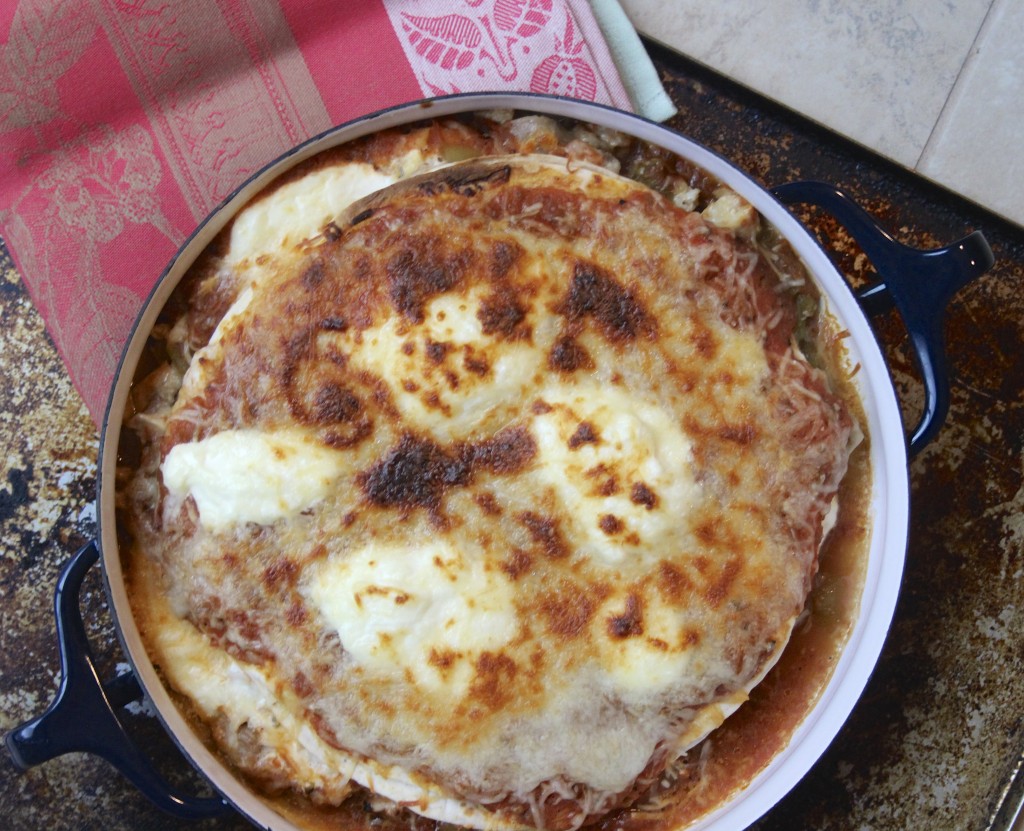 Ok.  I love Mexican type foods.  I know I’ve told the story before but when my mom was pregnant with me she craved Mexican foods and I have been a fan ever since.  This dinner was fantastic.  Filling.  Flavorful.  So good.  And by that I mean SO GOOD.  The kind of good that you will be glad there are left overs for lunch.  The charred salsa makes such a difference.  Your kids will not even know there are black bits of char inside.  But the flavor will be there full force.  If you like these sorts of flavors you should try this dinner.  I know we will be making it again. 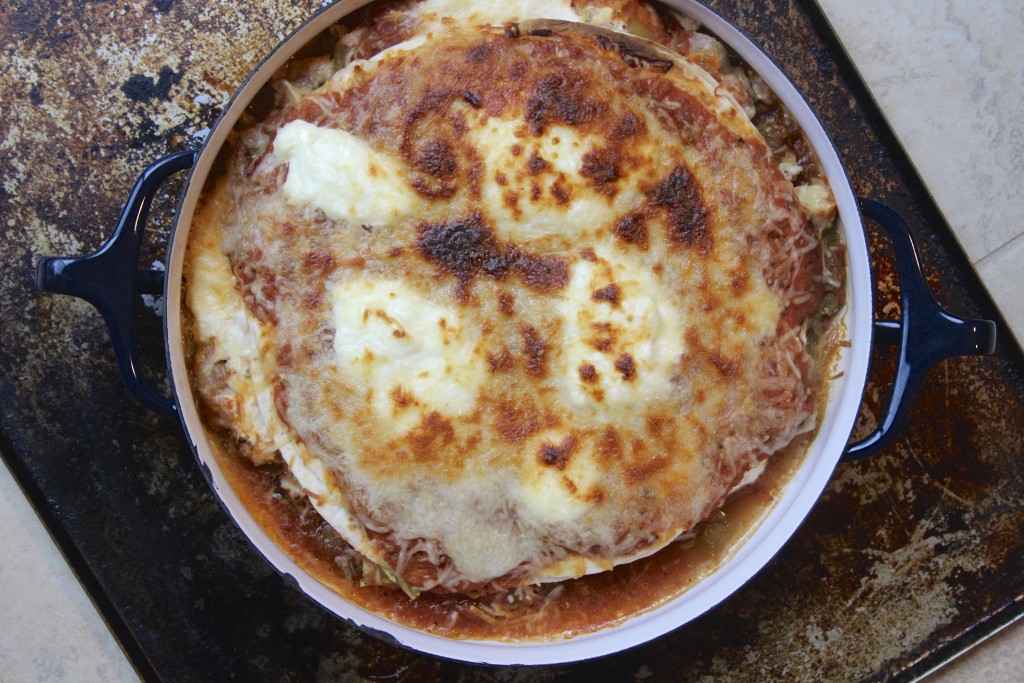