Once upon a time I worked with a woman who asked me if my British husband drank a lot of tea.  I think I nearly choked on my lunch.  Does he drink a lot of tea? He drinks tea when he wakes up.  He drinks tea after completing any sort of chore.  He drinks tea when he is sick.  He drinks tea while reading a magazine or paper.  Did he just wash the dishes? Oh he will be drinking a cup of tea shortly after then.  Is there a blizzard? Better hope we have more tea than they originally had during the Boston Tea Party.  Yes, he drinks a lot of tea.  But he will only drink one kind.  It has to be Yorkshire Tea.  Not Yorkshire Gold (although, if forced, he will suffer through).  He likes it with a splash of milk.  Not too much milk.  Not without milk at all.  In other words…I was a little worried about whether or not I would get this tea thing down. I do not drink tea often.  Unless I’m sick.  Then I quite like it.   But a hot drink lover I am not.

Milkshakes are another story though.  I adore them.  Usually extra thick coffee shakes.  Not chocolate.  Not vanilla.  Not strawberry.  Coffee all the way.  And, until recently, I did not even drink coffee- I think it was just the flavor I loved.  Have you seen the over the top milkshakes coming out of Black Tap in NYC?  They are being written up all over the place right now so you might have.  They are incredible! I almost want to pile the kids onto the local train and head down just for the experience.  It would totally be worth it.

Today our little boy was home sick from school.  He had, what we thought, was a simple cold.  As it turns out… he has the flu.  I was going to make him a cup of  “tea”…aka hot water with honey and lemon.  But his throat really hurt.  So then I was thinking a cold milkshake might be great.  And then I thought how could I combine them both?! The best of both worlds.  I had (clearly) stopped thinking about our little boy coughing and sneezing all over the couch and turned my thoughts to flavor combinations.  Don’t worry- he ended up with a shake in the end.  You never go somewhere and ask for a tea shake.  At least not here where we live you don’t.  But let me tell you…you might want to start! This flavor combination was incredible.

I started by taking whole milk and pouring it into a small sauce pan with three Yorkshire Tea bags.  This was simmered for fifteen minutes over a very low flame.  The liquid was then cooled and placed in the fridge for an additional thirty minutes.  While it was cooling I made a batch of whipped cream, because really, what is a milkshake without whipped cream on the top?  That was then set aside and the milkshake magic began.  Into a single serve blender I added a lot of vanilla ice cream (I told you I liked these shakes extra thick), a tablespoon of brown sugar and enough of the tea infused milk to blend it all up.  Into our chilled glasses I added two more scoops of vanilla ice cream and poured the shake over the top.  The cup was topped with loads of whipped cream and decorated with tiny pale pink sugar pearls.  Straws were stuck in the side and the party began.  Oh. My. God.  The flavor of these shakes was incredible.  The tea was transformed into a creamy frozen liquid followed by the most subtle taste of brown sugar.  I might have found a new favorite.  And my husband might have finally found a way to get me to drink my tea. 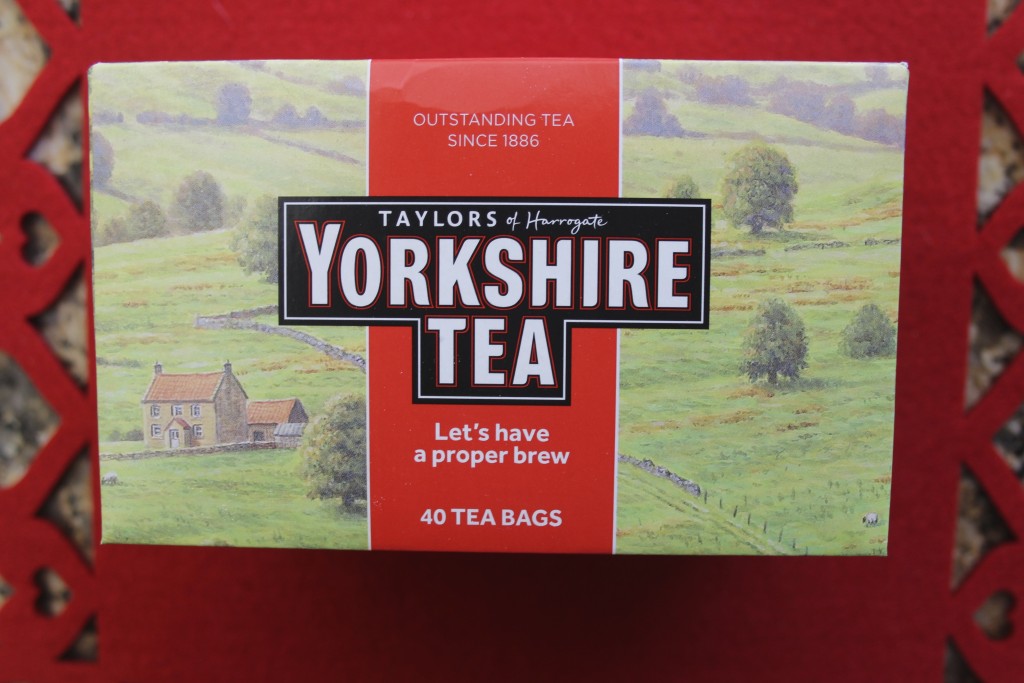 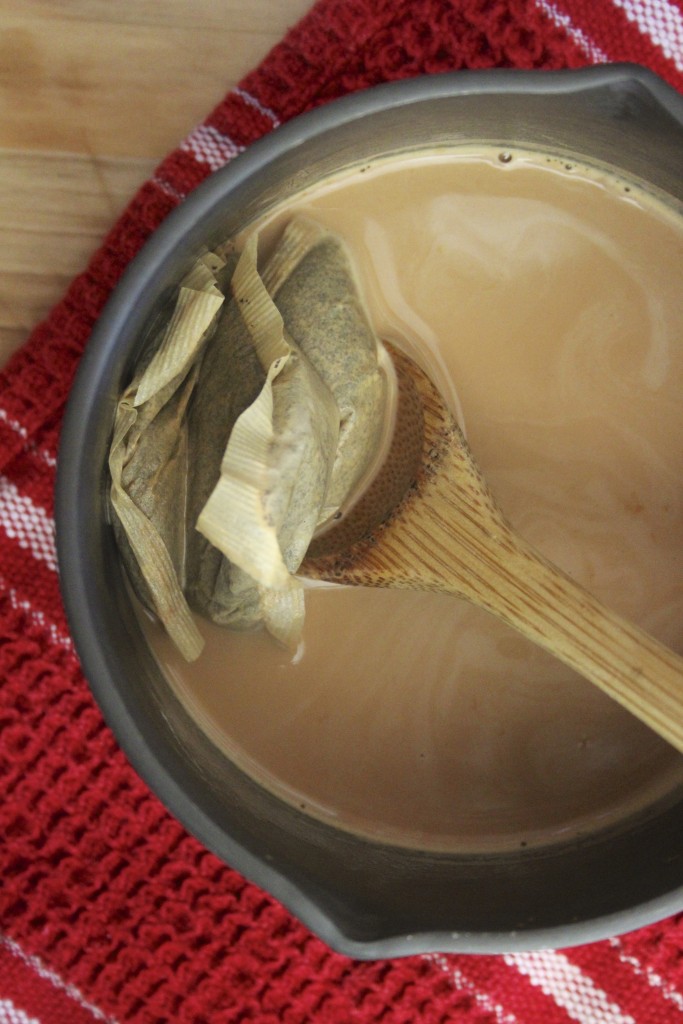 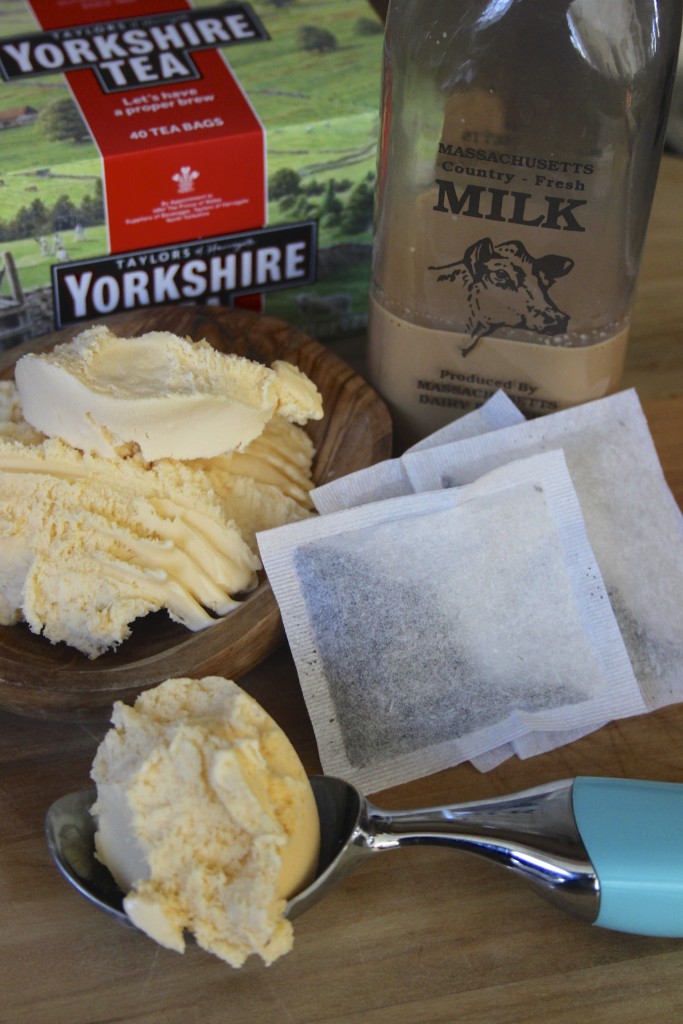 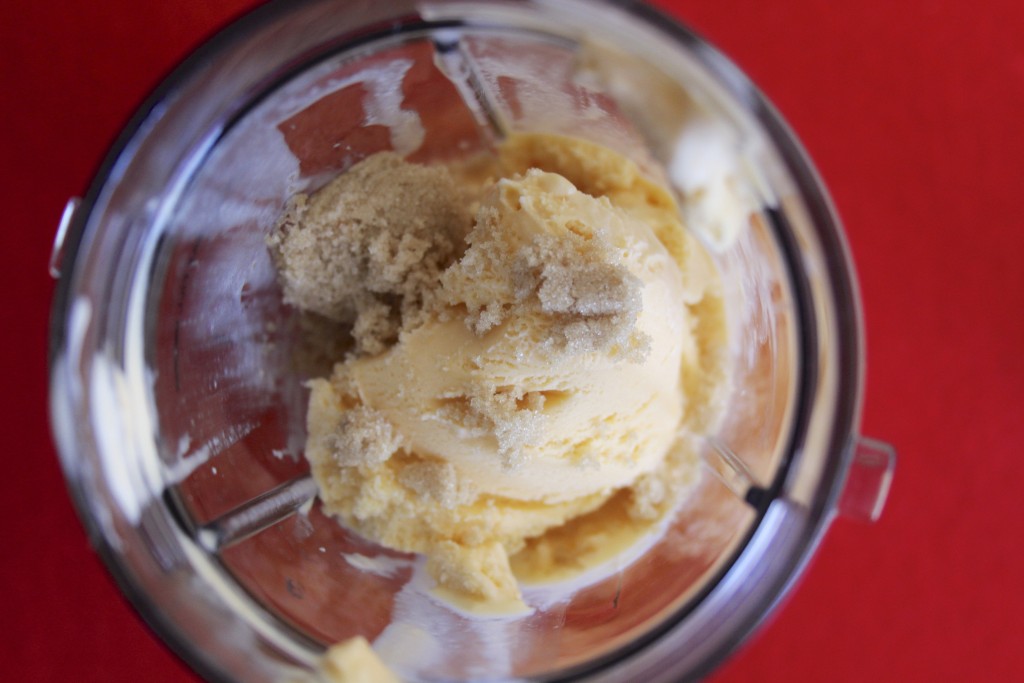 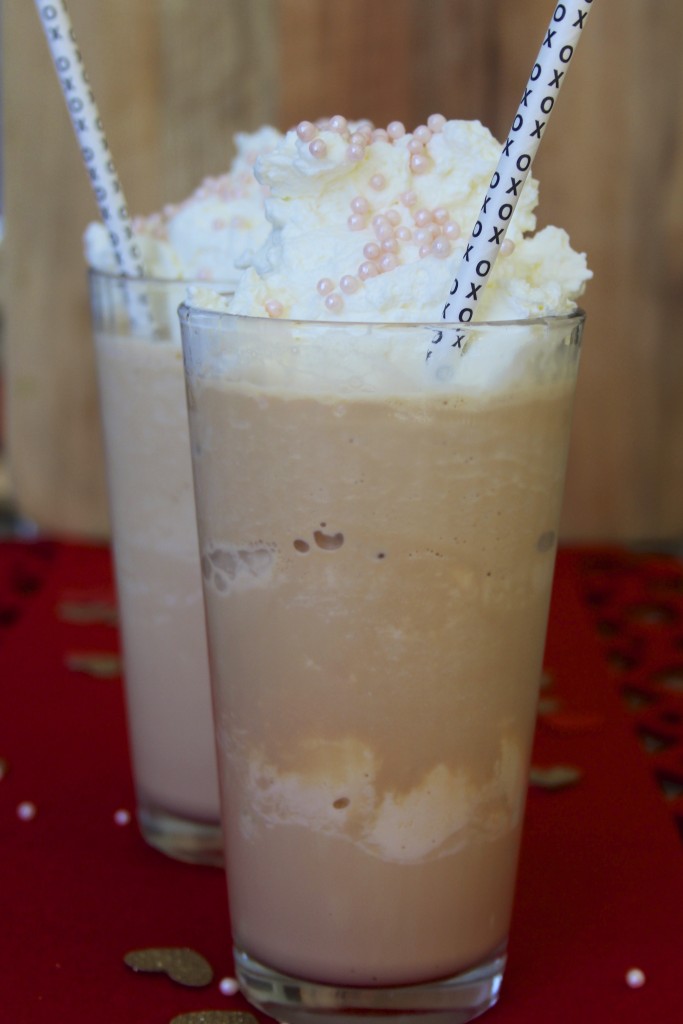 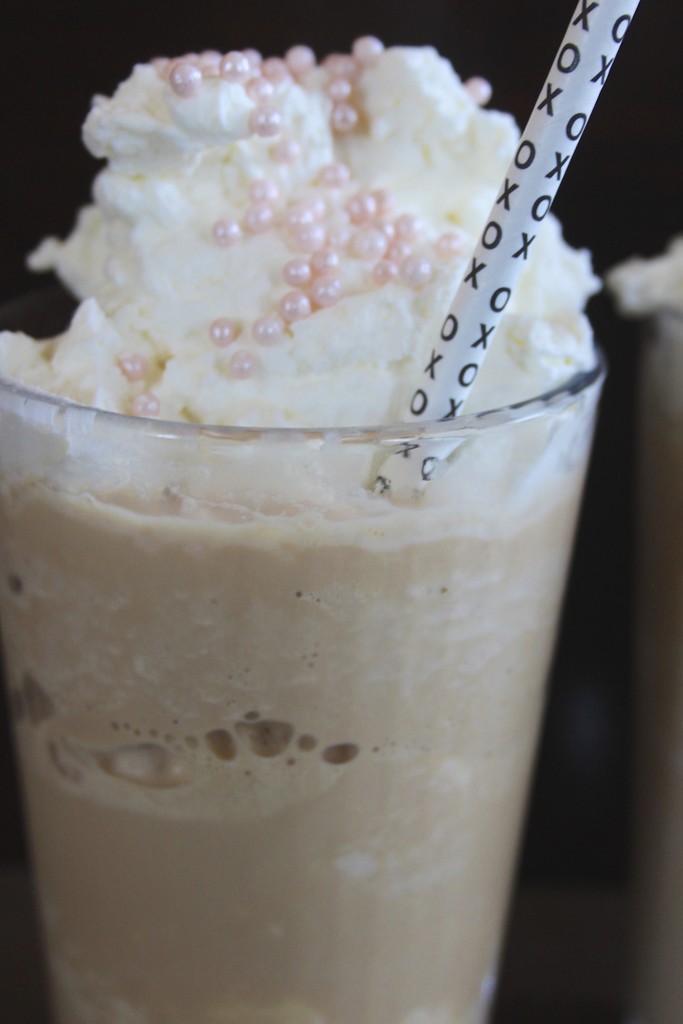 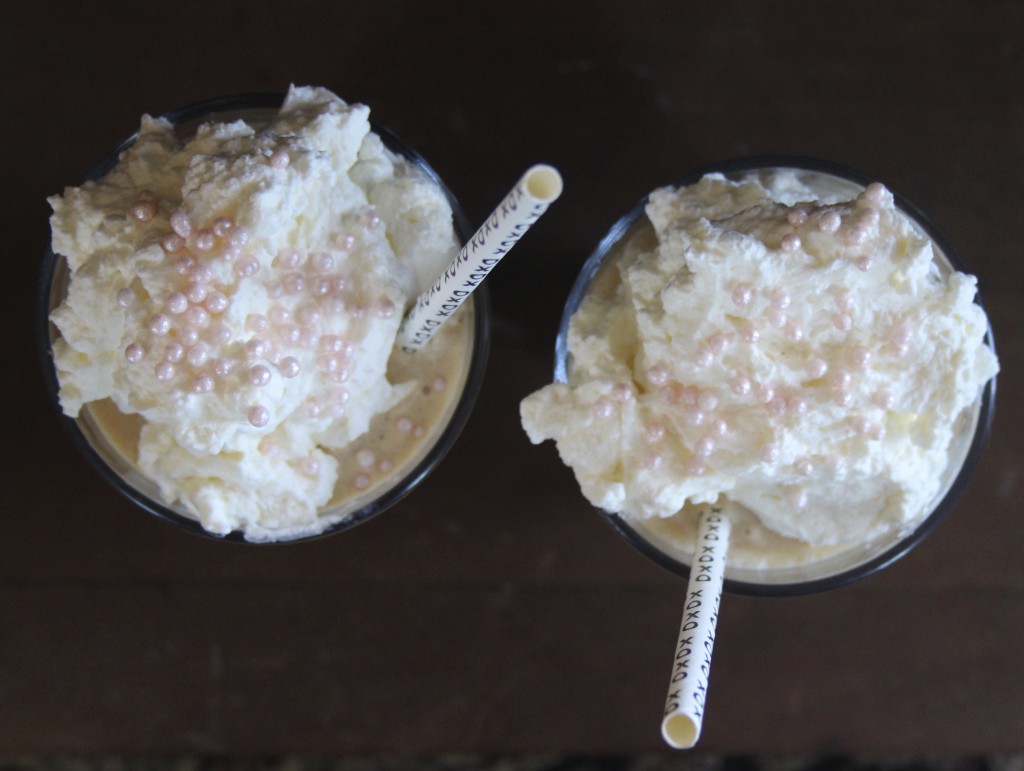 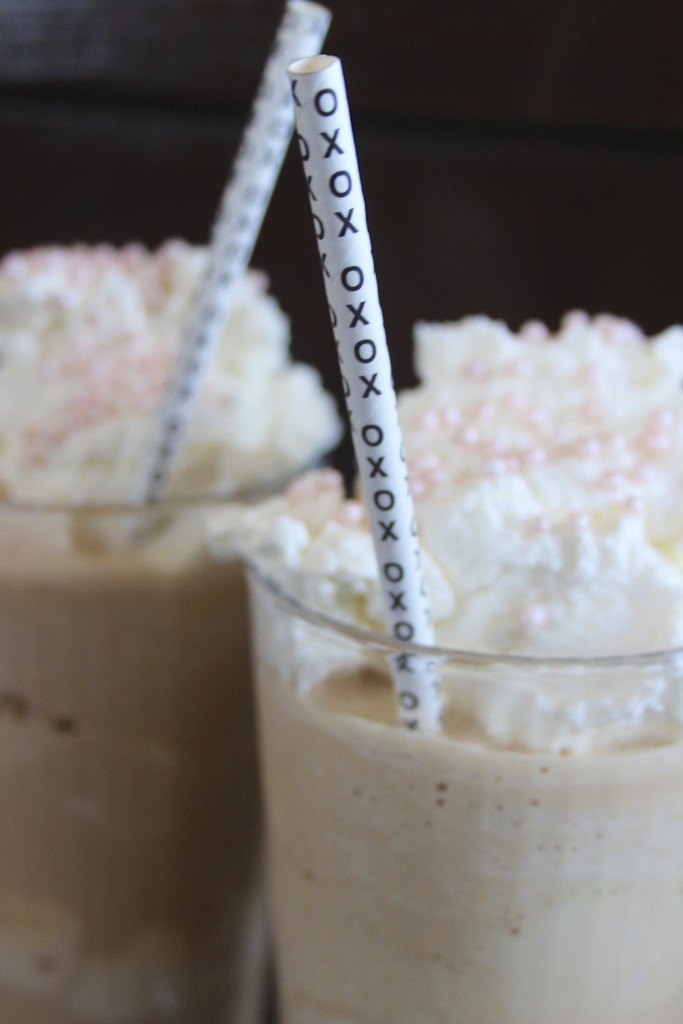 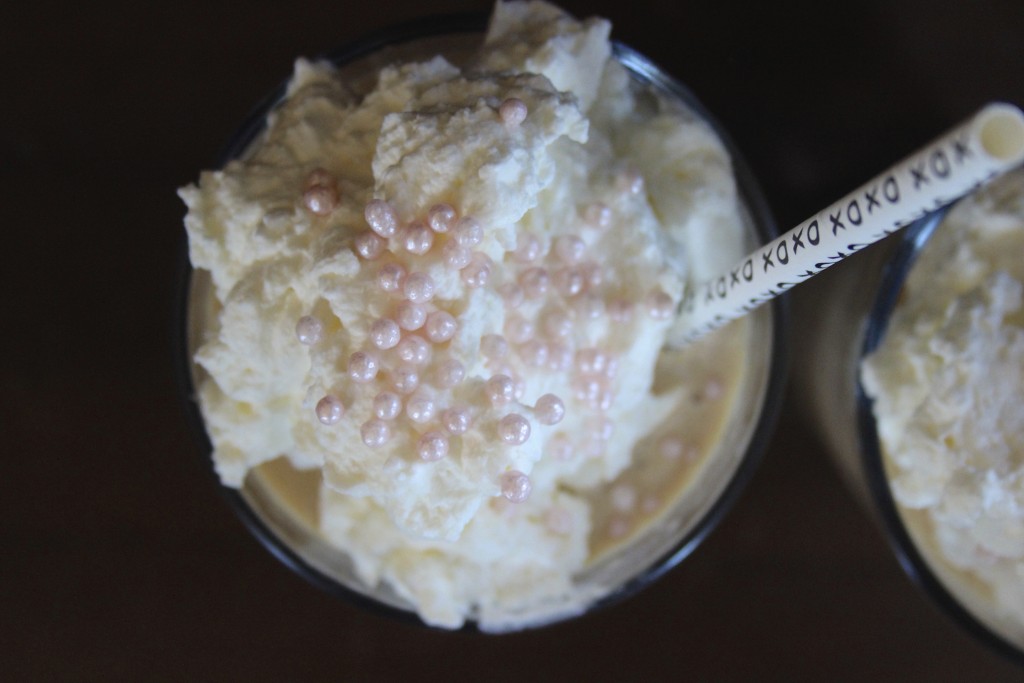 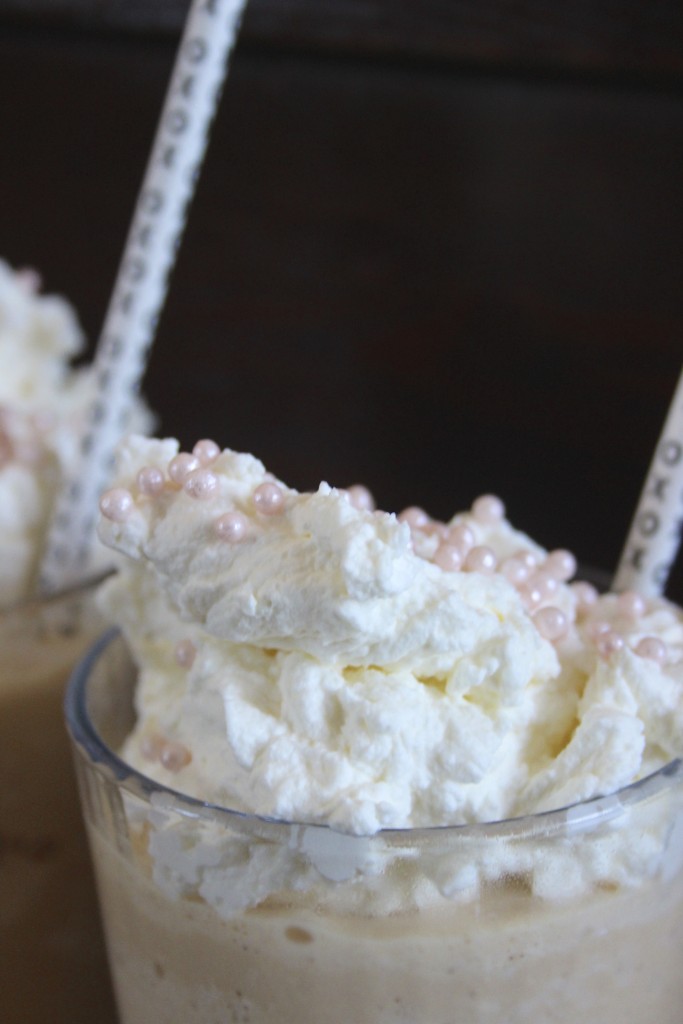 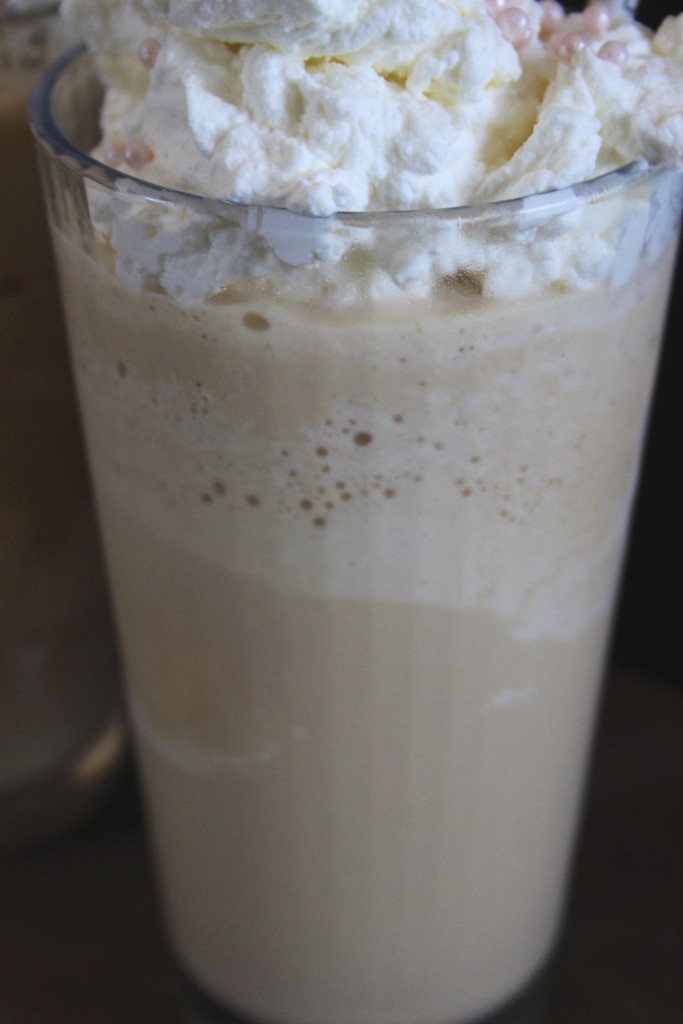