The weather here in Rhode Island went from being hot and humid to almost fall like today.  The trees won’t stop blowing and there is a crispness in the air that I would have begged for yesterday.  Yet it is mid-May and knowing that we have many hot and humid days ahead has made me embrace this cool air (even if I had to shut the windows which I was so grateful that my husband put the screens into yesterday and throw on a sweater)… Our kids have been struggling a little with this move of ours and although it is a Wednesday night I thought I’d make them a special dessert to say hang in there- pretty soon it will feel like home.  Of course…we may regret this at 9:00 when they are still up because they had sugar after 4:00.  Inspired by my son’s story last Friday for Mother’s Day in which not only did he tell the class I drank coffee (which I really don’t) he also said he loves me because I make him cherry pies.  Where does he get this stuff? I can honestly say I don’t think I’ve ever made a cherry pie other than in his dreamy imagination.  But today I will bring him one step closer with a crumble.  The pie crust maker of the family is at work and it just seemed like too much work for me to struggle through only to have no guarantee the crust would come out as yummy as his.  It is going to be a goal of mine though…add it to the list.  Make a killer pie crust.

I didn’t want to just use cherries.  I wanted it to be different.  We love introducing the kids to different fruits and vegetables- sometimes sneaking them in for a few recipes or making up names for them (edamame started out as Japanese peanuts in our house…) to tempt them into trying them.  More often than not they end up loving them… although we’ve yet to conquer mushrooms.  So today I had been reading about tomatillos.  I had bought them to use in a salsa for last night’s taco night but forgot they were in the fridge.  So out they came today and I read that they can taste similar to rhubarb if used in a sweet recipe.  This was a total experiment.  I had never used them for anything other than a savory flavor. 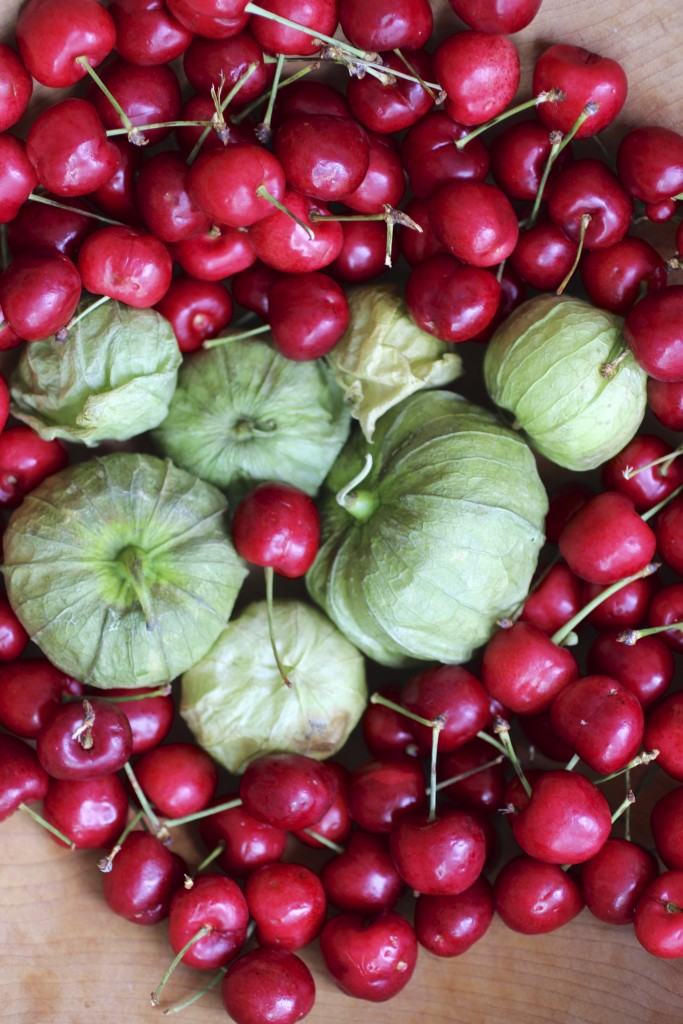 The tomatillos should be bought with husks that are tight fitting and not so wrinkly.  The smaller tomatillos are going to be sweeter than the larger ones.  Eaten raw they have a bit of a citrusy flavor.  Cooked in a cast iron pan for 30 minutes over a low heat they can take on an earthy, nutty flavor.  They are quite versatile.  I husked mine and then washed them thoroughly as they have a very sticky feel to them once the skins come off.  I set them aside and pitted and chopped the cherries.  There was no measuring here.  I had about seven tomatillos and a small container of cherries of which I used half.  They were mixed together in a bowl and sprinkled with sugar and the juice of one lemon before I drizzled on vanilla bean paste and a small glug of water.  I let this sit for about ten or fifteen minutes, which, as it turns out, was just enough time to run outside and catch the random school papers that were blowing across our back garden from the breeze that had blown open the recycling bin. 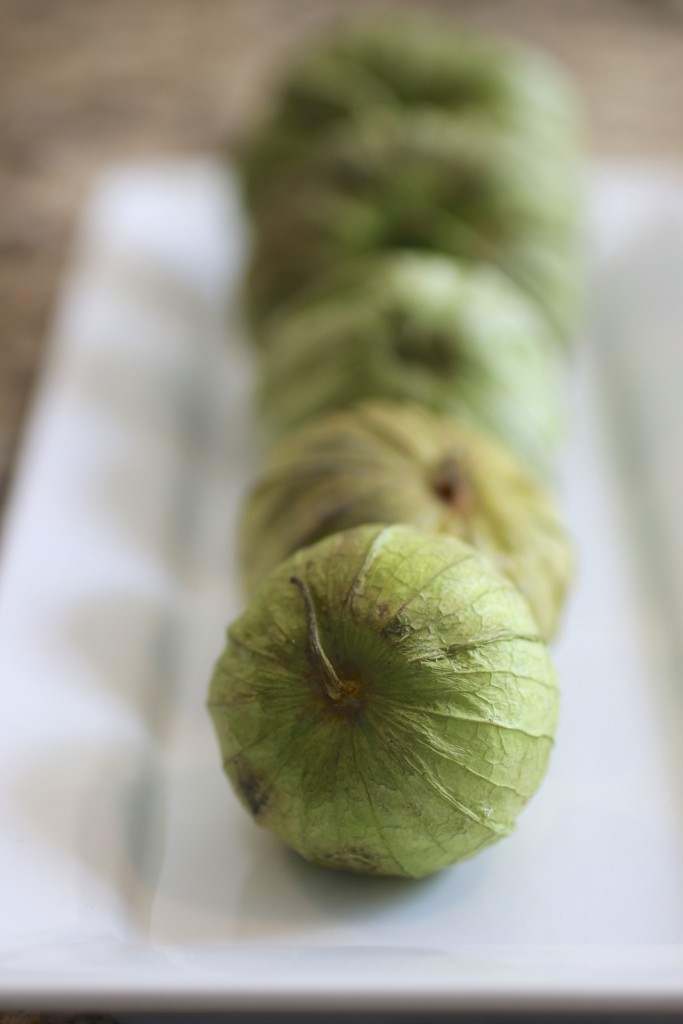 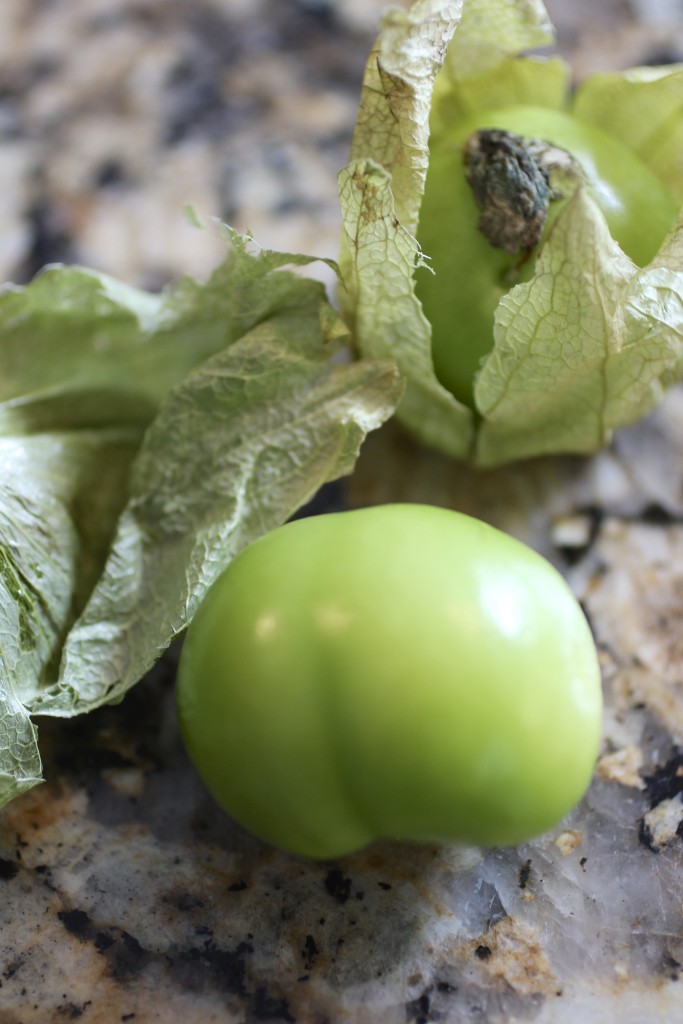 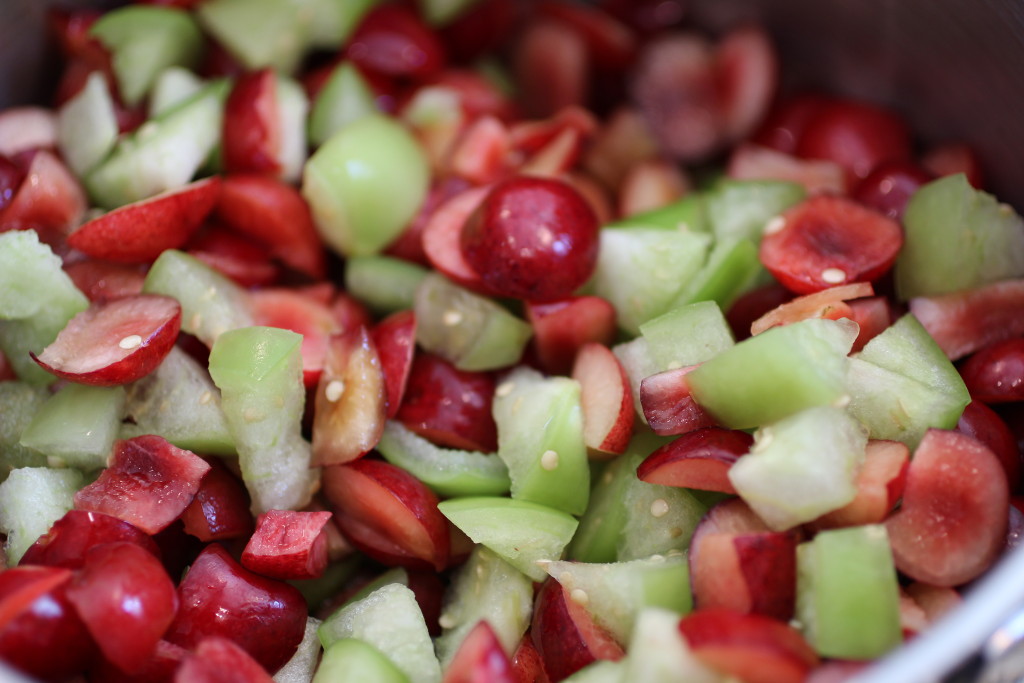 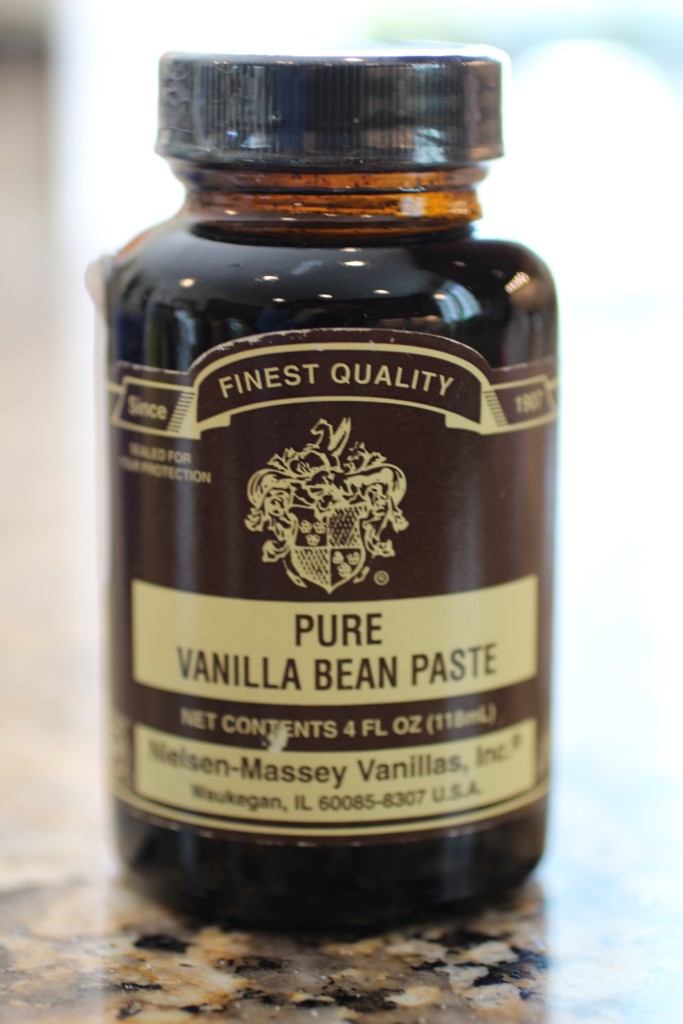 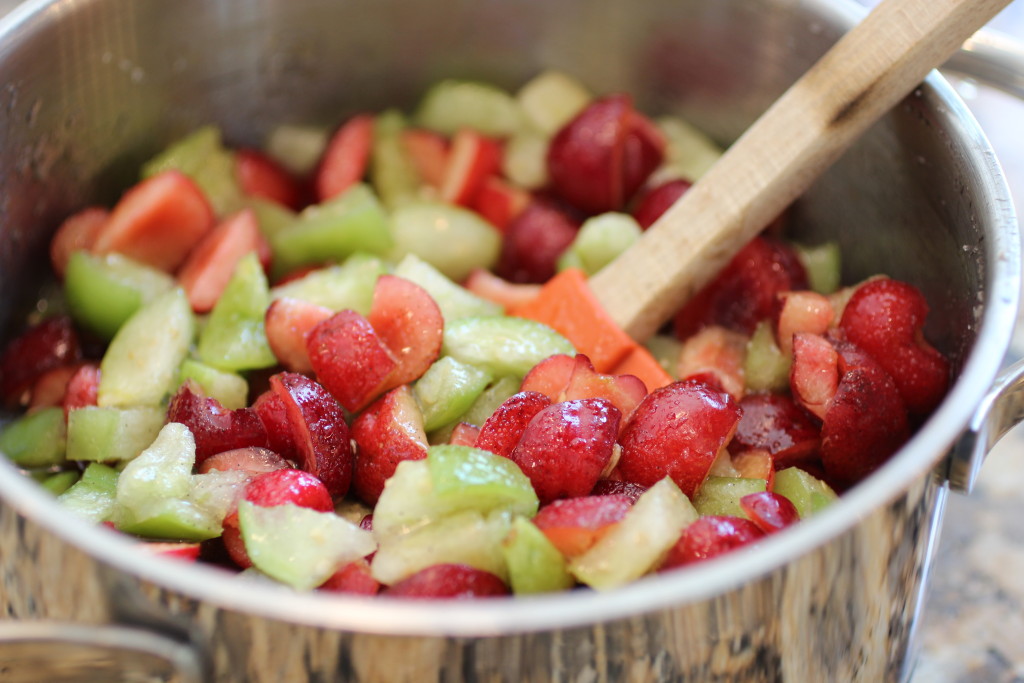 To make the crumble topping I took one cup of flower, 2/3 cup of sugar, 1 teaspoon of baking powder and a pinch of salt and mixed it with one beaten egg.  I melted 6 tablespoons of unsalted butter and set it aside.  The crumble mixture was kneaded by hand until it formed a crumbly topping…at which point the phone rang.  Do you know how difficult it is to answer an iPhone with sticky fingers?!?! Impossible. 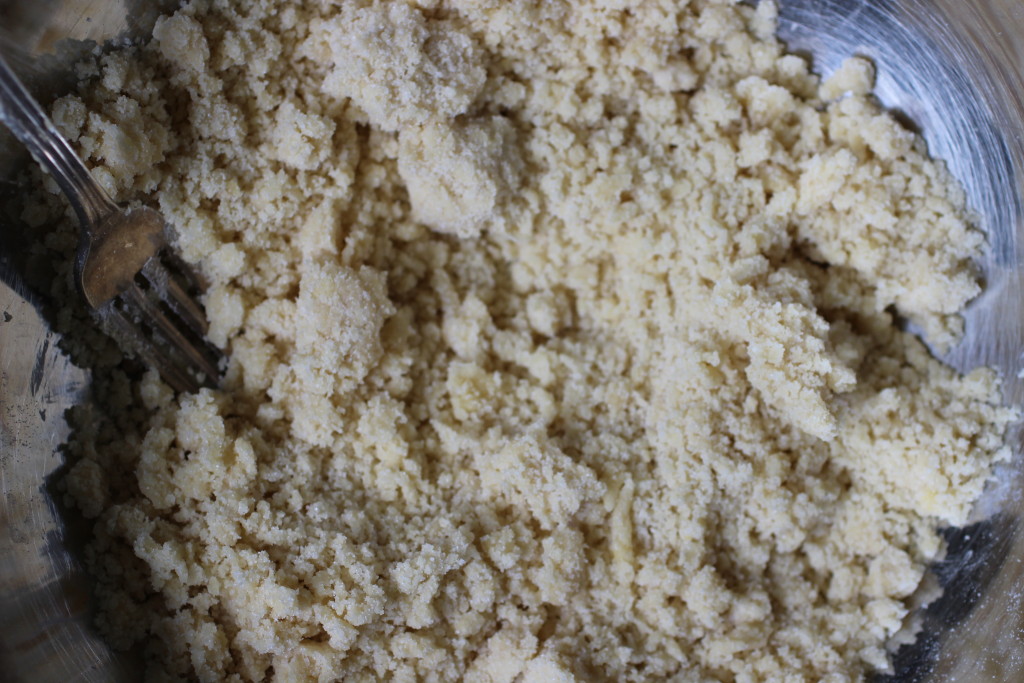 The fruit mixture was getting pretty juicy and so I strained it (reserving the juice) and filled a variety of containers with the strained fruit before crumbling the topping on.  The butter mixture was then drizzled on top of the crumble and the dishes were placed on cookie sheets and put into a 350 f. oven where they baked for 40 minutes.  I used the reserved juice to make whipped cream.  I added half of it to about two cups of whipping cream and whisked away.  The juice from the fruit added a subtle flavor to the cream which made a really lovely whipped cream giving just a hint of the flavors that would follow in the crumbles. 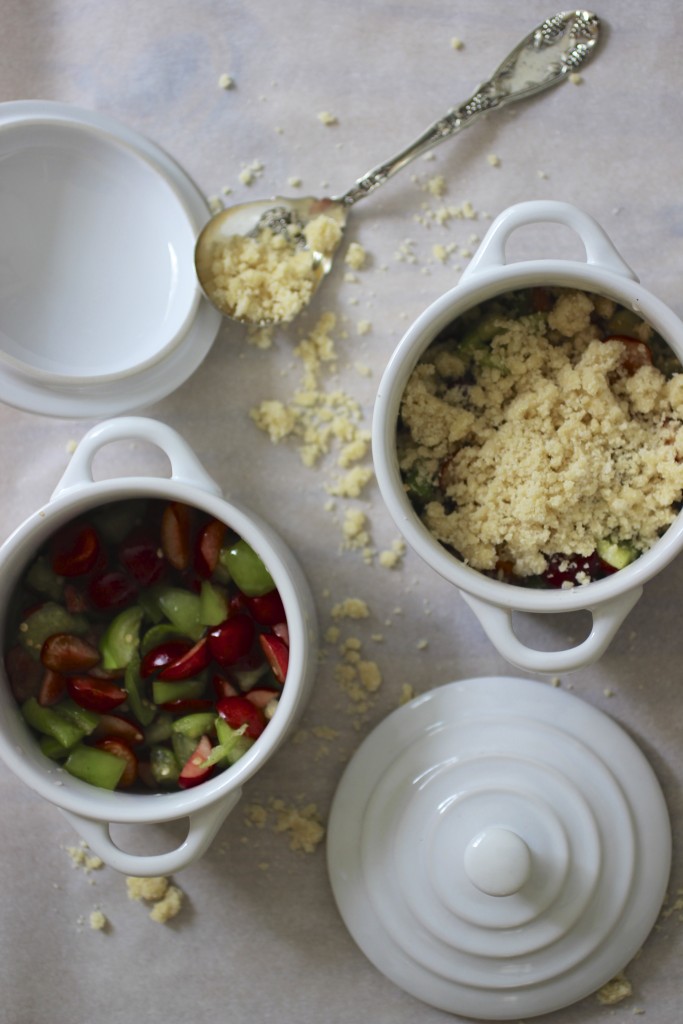 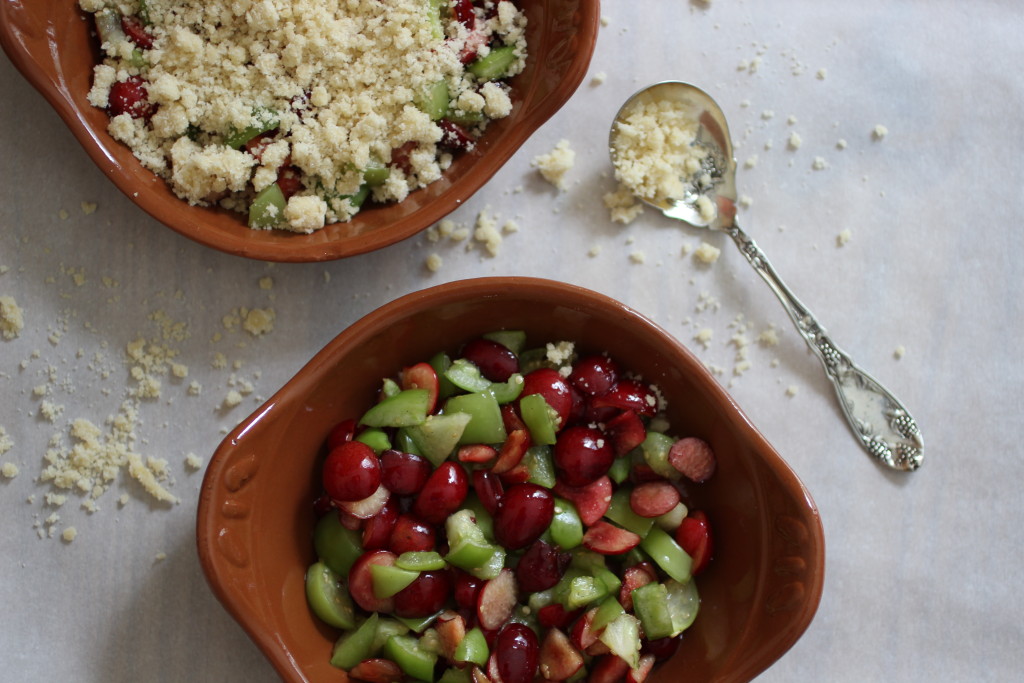 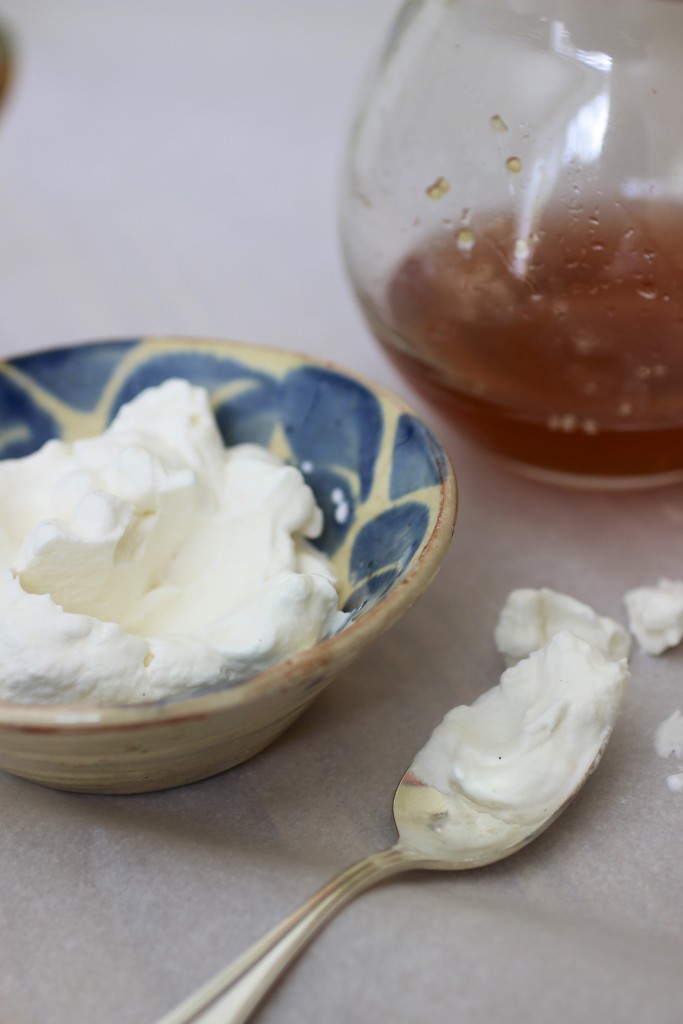 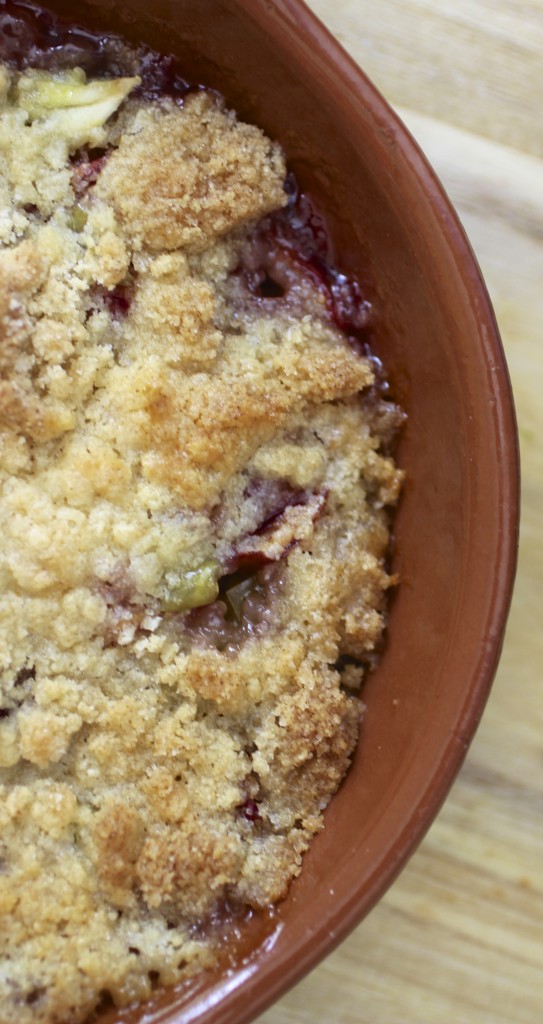 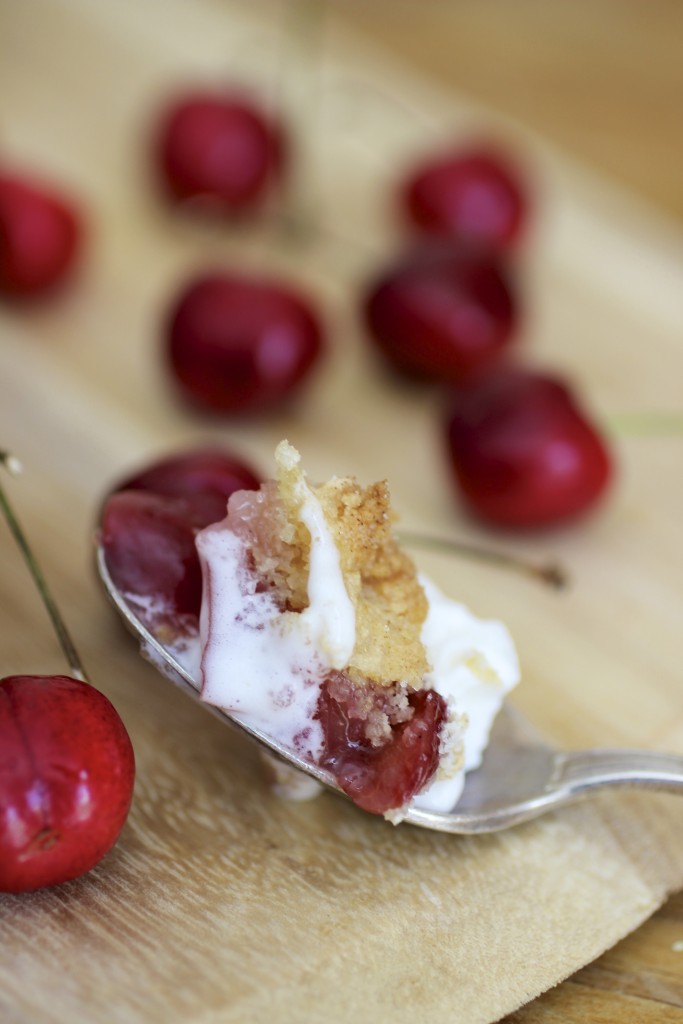 When they came out of the oven I had to taste one.  Before it cooled.  Before the steam cleared.  It was just too tempting.  And too good.  The tomatillos really did take on the subtle flavor of rhubarb and worked so well with the cherries.  The cream on top melted into the crispy bits and kept me from burning my tongue.  I know the kids are going to love these.  They are the sort of dessert I can picture them eating bundled up in woolen blankets sitting around the fire pit.  Even though it is mid spring it sure feels like late summer today.  This is the perfect dessert for this weather.