Let’s just start by saying this is not a recipe that can be made quickly…as I sit here at roughly 4:00 this afternoon, I am realizing I began making this scrumptious concoction at roughly 7:45 this morning.  If I had followed all of the directions correctly I’d still be waiting.  Until tomorrow!!! I cheated.  I broke the rules.  I didn’t let the cheesecake set all night.  I did let it set for quite a while and to be honest…it seems perfectly fine. 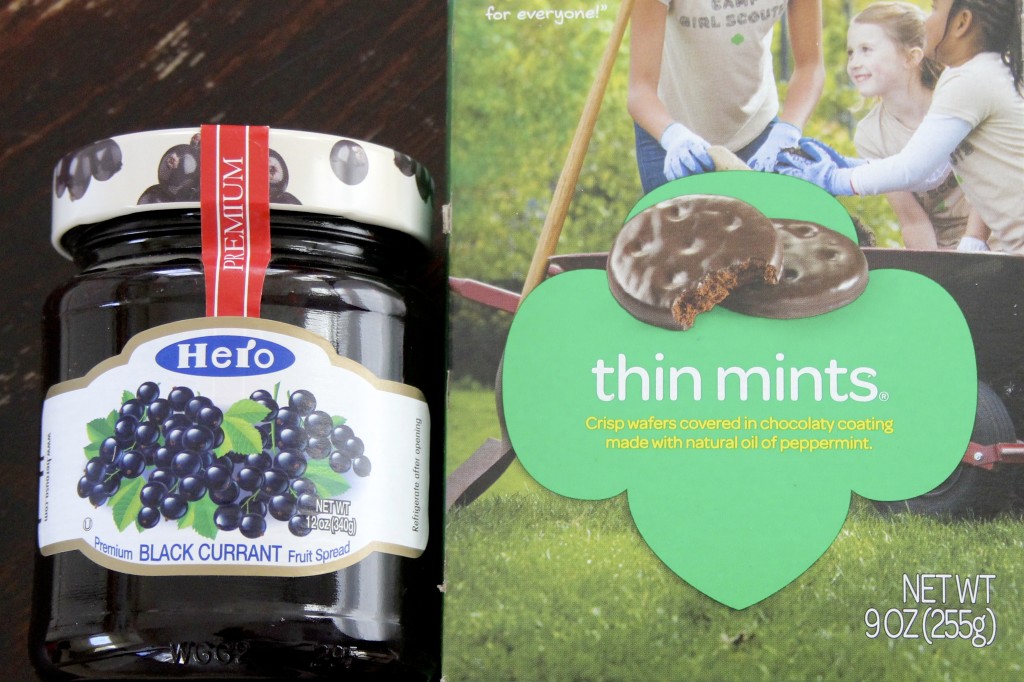 Yesterday my mom stopped by with a surprise box of Girl Scout Thin Mint cookies.  The only minty thing I tend to like or be able to stand the taste of.  Do you remember back far enough to the time that the insides were not chocolate? Or am I imagining that? In my mind they were tastier then.  Maybe that is because I am not huge into chocolate on chocolate.  Of course, that said, it would not stop me from eating them in one sitting (maybe two) if they were left in that box.  I decided to use them for the crust of a chocolate cheesecake recipe I have been wanting to make for some time and decided to pair them with black currant jam for the ultimate flavor combination. 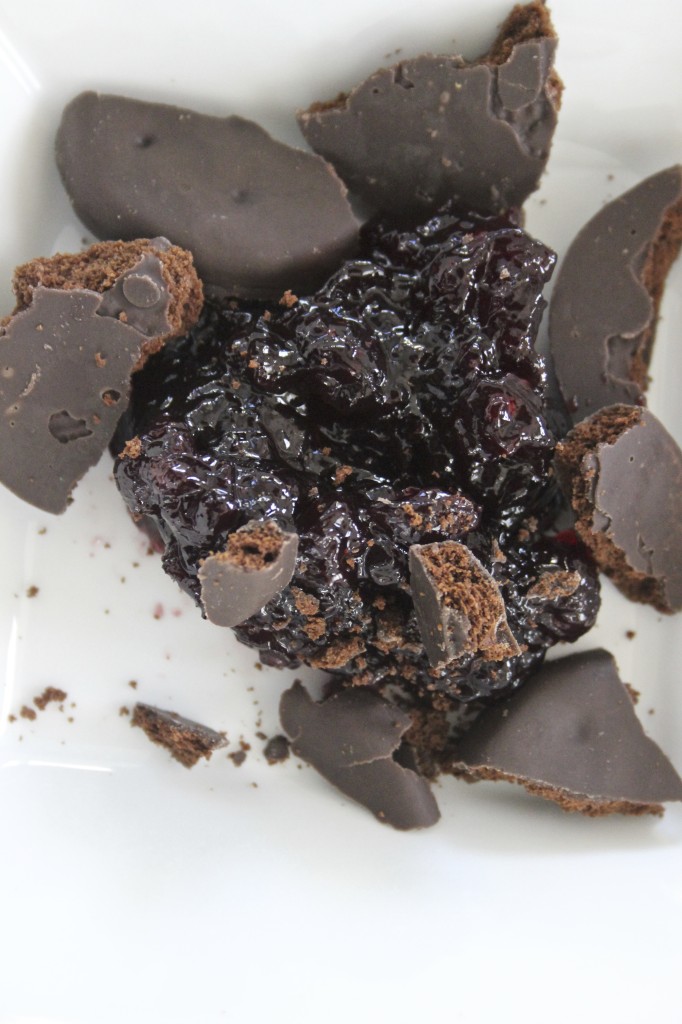 We have a huge collection of cookbooks.  Some we refer to all the time and others I do not even know sit on the shelves.  We are always saying we need to use them more.  A while back I came across a recipe in Barbara Fairchild’s bon appetit Desserts that was calling to me.  I’m not even sure why, because, as I’ve said, I’m not a huge chocolate person.  I read it and it seemed fairly straight forward and simple and I thought that will be easy to whip up.  So this morning, around 7:45 I thought I’d give it a go. 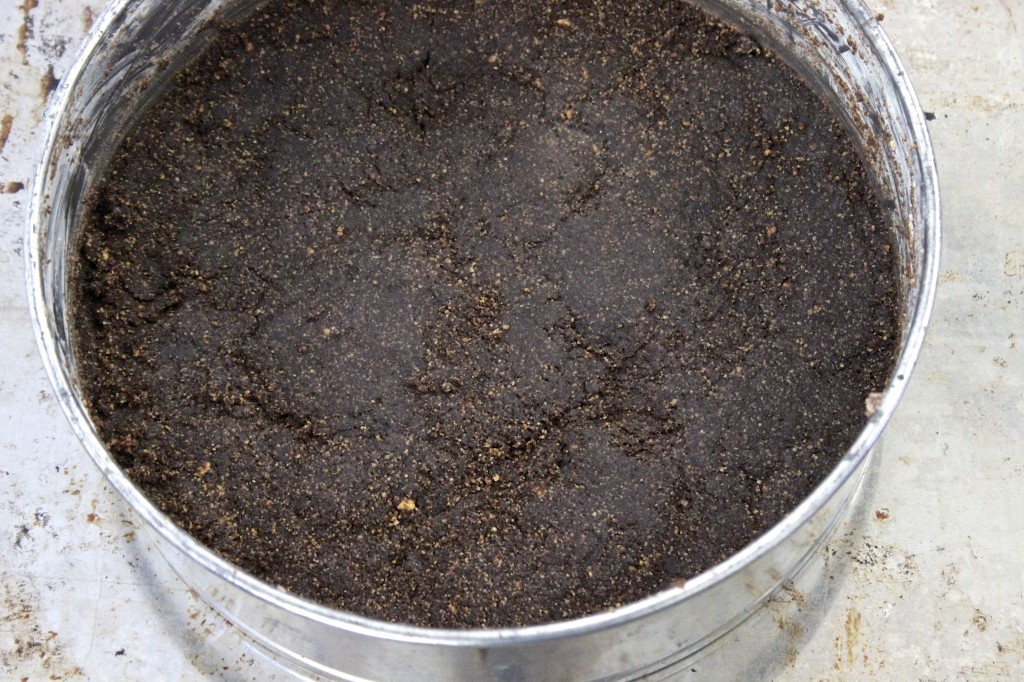 To make the crust I buttered a 9″ springform pan.  In a food processor I blended the cookies and sugar until finely ground and then added the melted butter.  Let’s stop there for a minute.  It was early. I have not been getting a lot of sleep because of a fussy four year old and we have just had ELEVEN days of school vacation which just about killed me.  I melted a stick (yes a stick) of butter rather than HALF a stick.  Still did not realize it and poured it right into the food processor.  The mixture seemed a bit wet so I decided to add some regular graham cracker crumbs to the very chocolate mix to make up for the BIG mistake.  I thought I was out of the woods….

Take the chopped chocolate and melt in a metal bowl that has been placed over a saucepan of simmering water.  Once melted remove from heat and stir in the jam…then let cool a bit until it is lukewarm but still pourable.  Head back to the food processor and get the filling started.  Blend the cream cheese, sugar and cocoa powder until smooth.  Blend in the eggs one at a time. 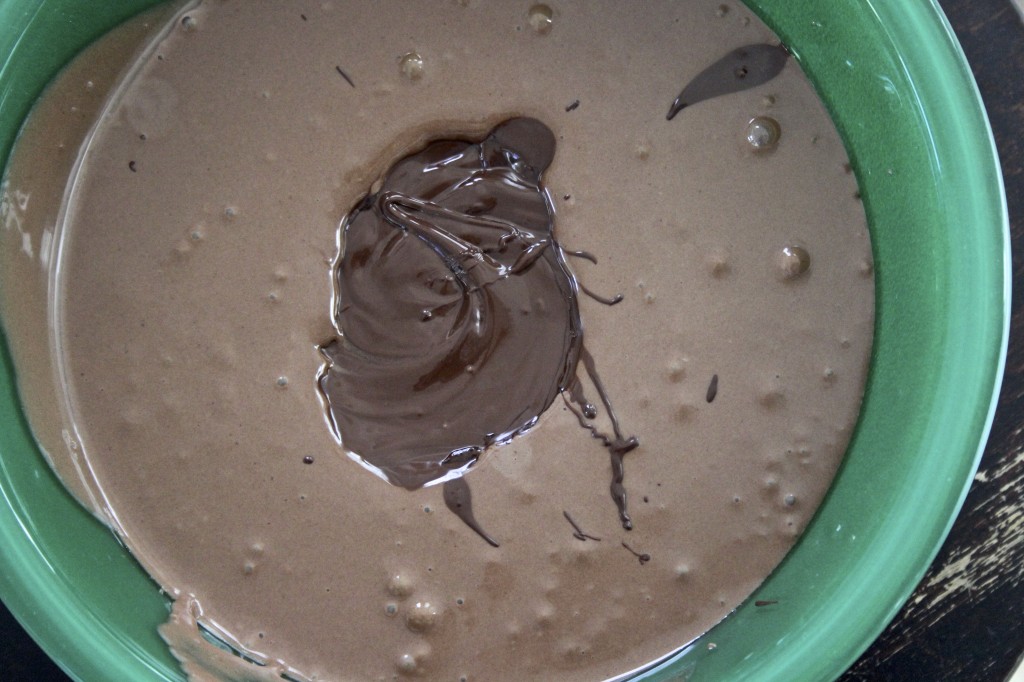 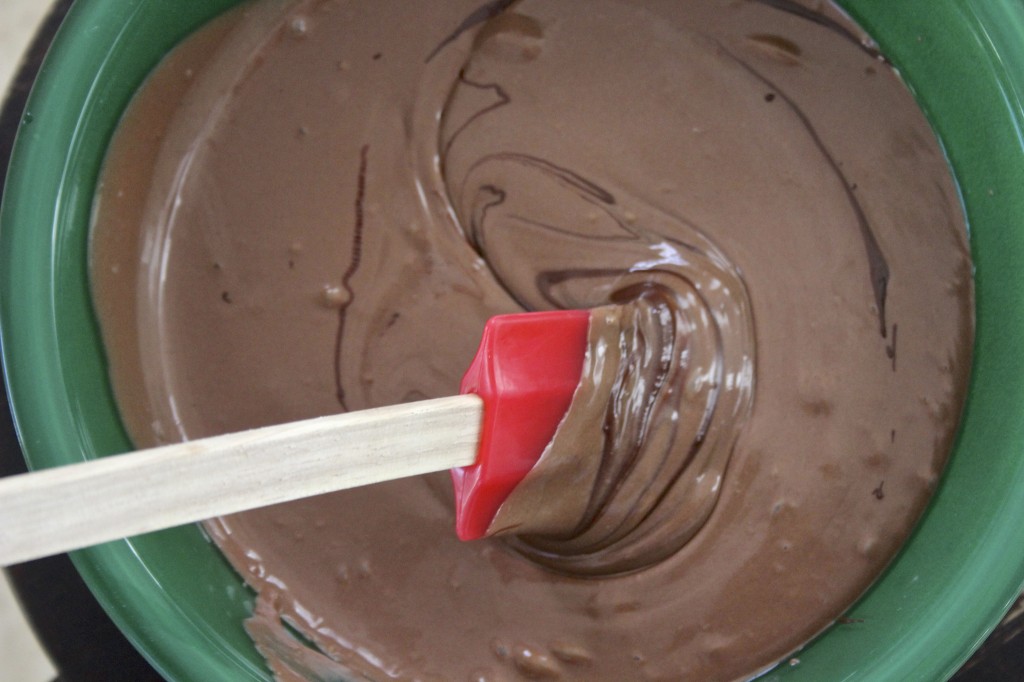 Mix in the lukewarm chocolate & jam mixture.  Pour into the buttered springform pan.  Bake at 350 for one hour. 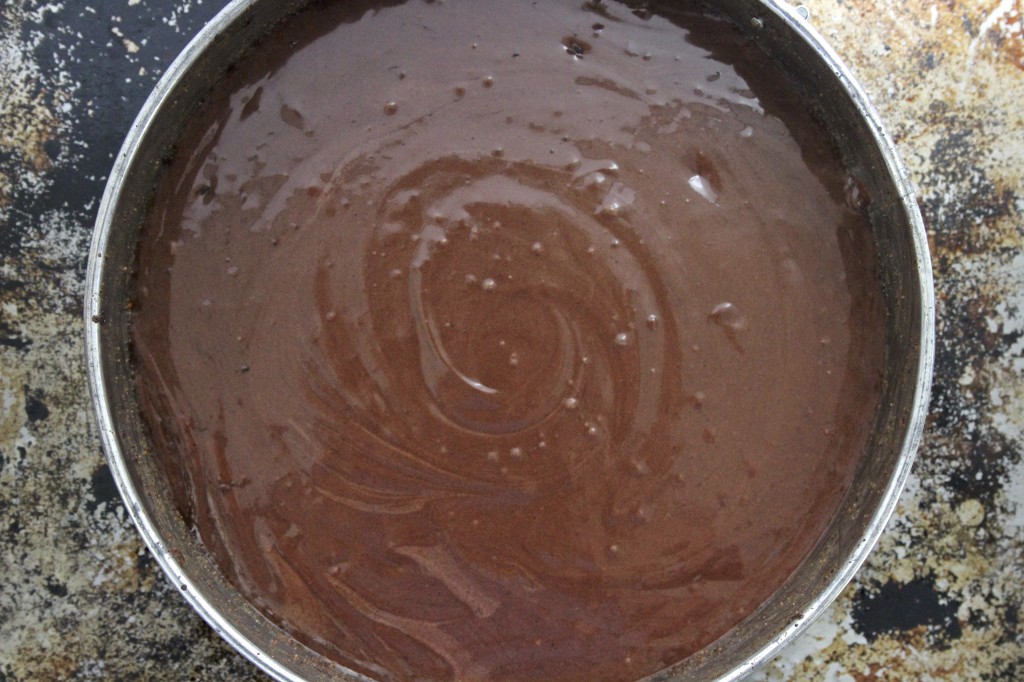 For some unknown reason I decided it would be wise to place my springform pan on a cookie sheet before I put it in the oven.  35 minutes into the baking process I was glad I did because the entire kitchen filled with a bit of smoke from the excess butter dripping from the bottom of the springform pan (note to self…1/2 stick of butter next time!!) which was then escaping from the one side of the cookie sheet that was not raised and dripping down to the floor of the oven.  Talk about a mess.  But anyway…an hour later I removed my cake.

I let it cool about ten minutes and removed it from the pan keeping it on the base.  I put it into the fridge to cool.  I tried to wait until tomorrow for the next step…I really did! But I had two kids saying please can we have a piece of cake and after the hundredth request I could not say no.  I made the topping by stirring the cream, chopped chocolate jam and sugar in a heavy saucepan over a low heat until it melted.  I removed it from the pan to let it cool and then I pulled the cake from the fridge (about six hours after it went in) and got it ready to frost. 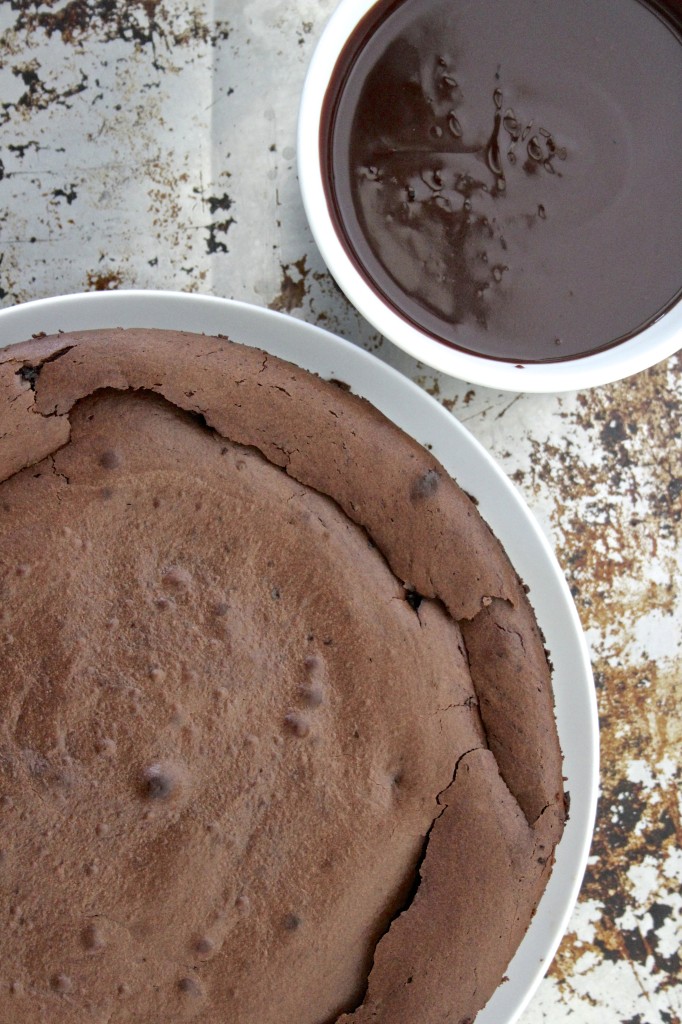 The original recipe has a beautiful picture of a (un-cracked) cake with gorgeous, thick frosting being spread atop it.  I figured I’d pour the frosting over the top and try my best to cover the cracks, although I really wasn’t bothered by them since this was just for our little family. 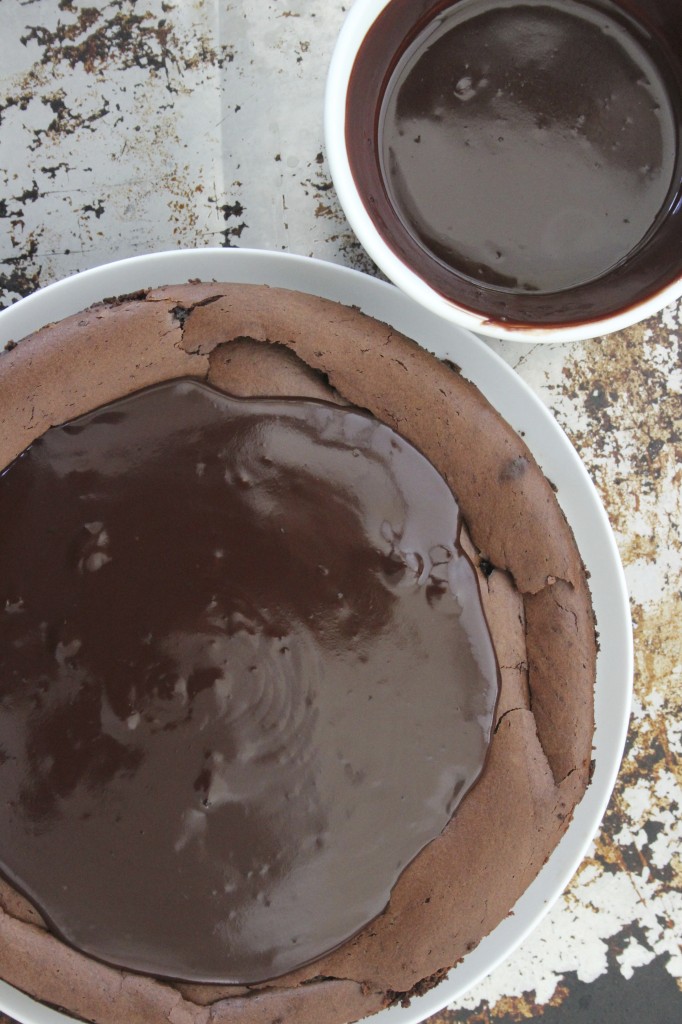 Once the frosting is on you have to let the cake set again back in the fridge for an hour.  This was perfect because I finally had time to take a shower (!!) and get ready for a birthday party we are on our way to….and yes…I still let my kids try the cake despite the fact that they would be getting more cake in a short while at this party…but only a bite each. 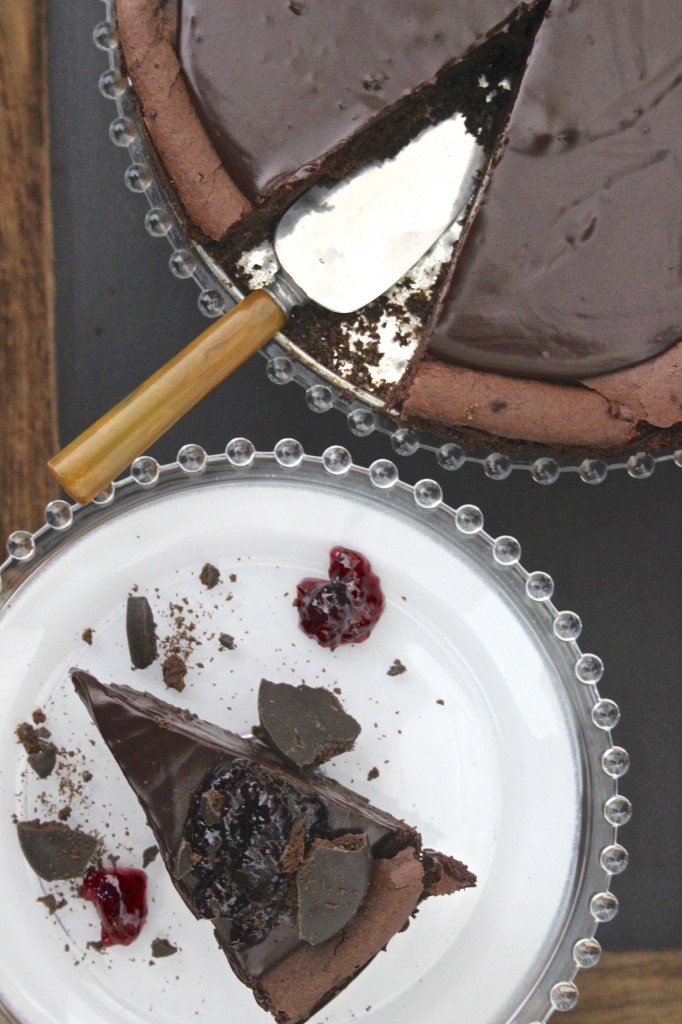 I topped the cake with more crushed Thin Mints and dollops of the black currant jam.  This is rich.  The jam really helps lighten it up and the flavors…let’s just say ohhhhh so good. 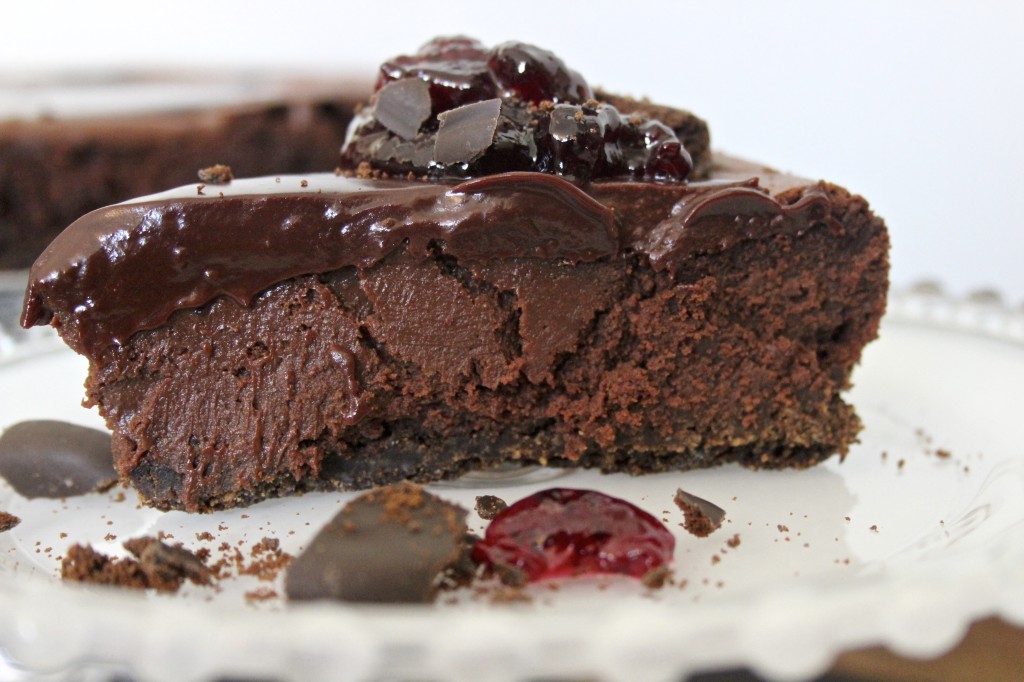 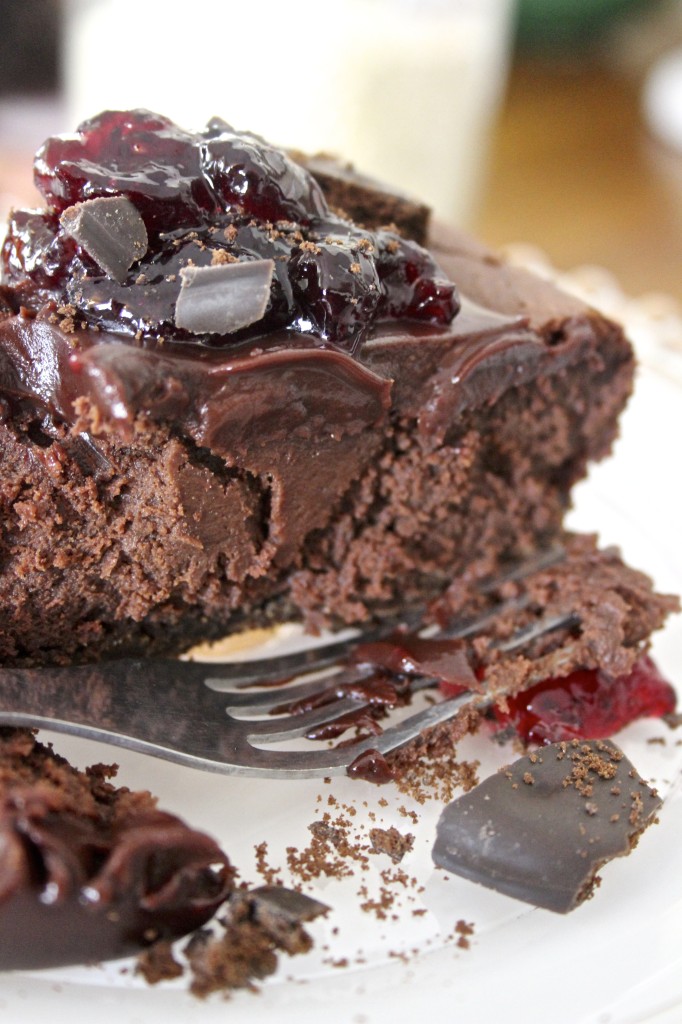 Worth the time, effort and oven clean up.