One thing we learned this summer is that our kids LOVE s’mores.  Years ago we let them make them over the fireplace in the living room (it was winter and we did not have a great outdoor space at the time)…it was exciting and and fun and they loved it.  But… for whatever reason…(a.k.a. it was just way too messy for three and four year old kids) we did not make them again.  Until this summer.  The day the outdoor fire pit arrived the first words out of their little mouths were “remember those things we made once…” oh yes…we remember.  I think there is still a chocolate smear on a couch cushion.  But this was outside.  So as soon as the sun set we set out to get messy and toast those marshmallows.  As the summer progressed it proved to be their very favorite nighttime activity.

Now that they are back to school we wanted them to remember that taste and hopefully, the memories they made eating them.  Putting those flavors into a cheesecake seemed like the perfect way to do this.  Maybe we are rushing fall’s arrival but we decided to add a touch of maple flavor to the chocolate cheesecake just to do our part to speed it along.  We’ll warn you…this cheesecake was an all morning affair.  Baking it and allowing it to cool took all afternoon.  Eating it took about ten minutes.  And the dishes from the process are still piled up.  In other words…it was a labor of love. 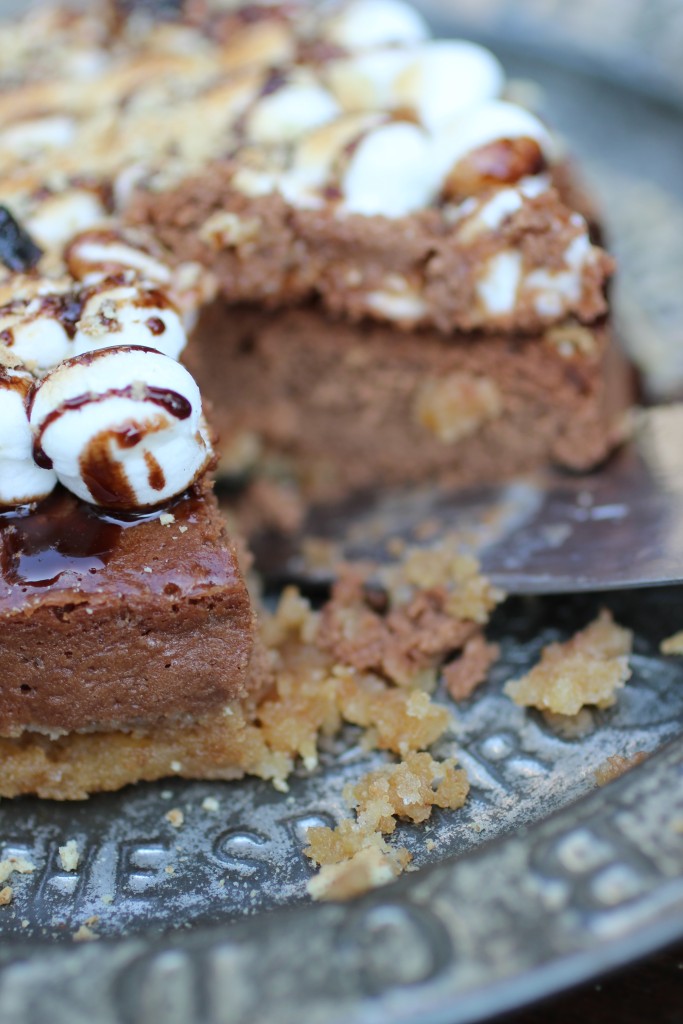 Stolen from our 1987 Gourmet’s Best Desserts cookbook we suppose the elaborate part should not have been a surprise.  Gourmet was pretty frou-frou back then.  We altered it a bit by changing the crust and substituting maple extract for almond.  Side note…once upon a time one of us made a few too many marzipan one holiday season and has since been unable to even contemplate tasting anything with almond extract.  In our case substitutions are best.

pinch of cream of tarter

Butter your springform pan.  And by this we mean really butter it.  Go all out.  You’ll be glad you did.

Crush your graham crackers in a food processor.  Add the 2 T sugar to this mix and set aside.  Melt the butter.  Let cool and then add to the graham crumbs.  Press into the springform pan.  Place this in the fridge while you make the filling. 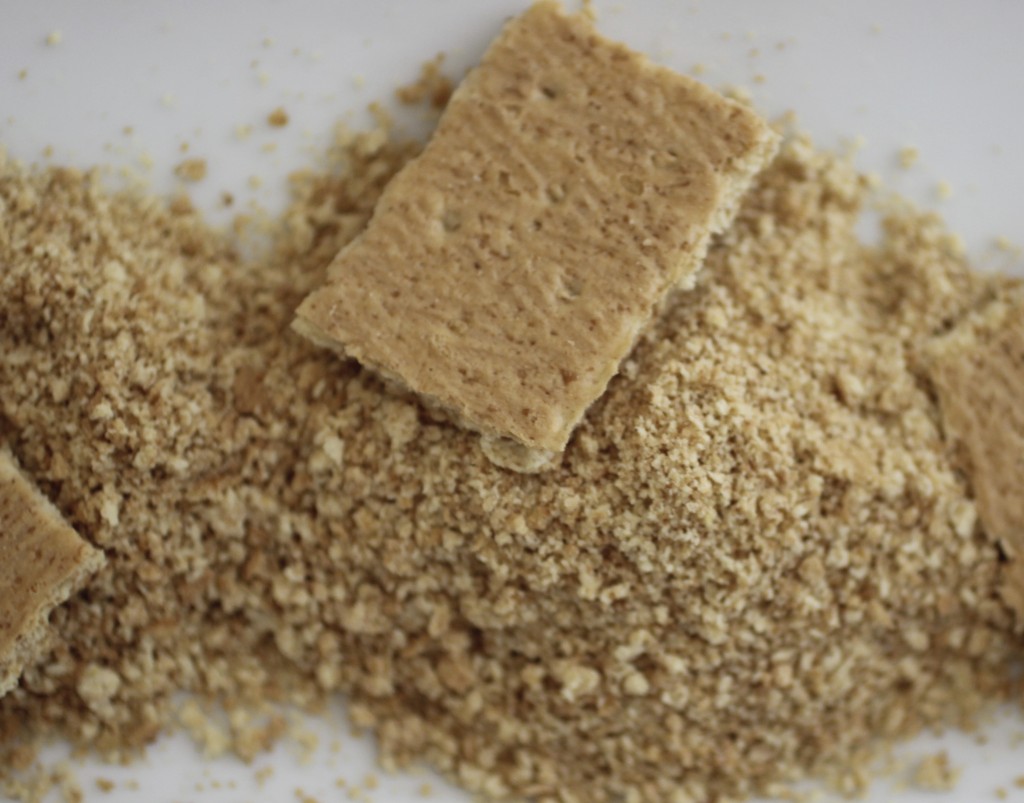 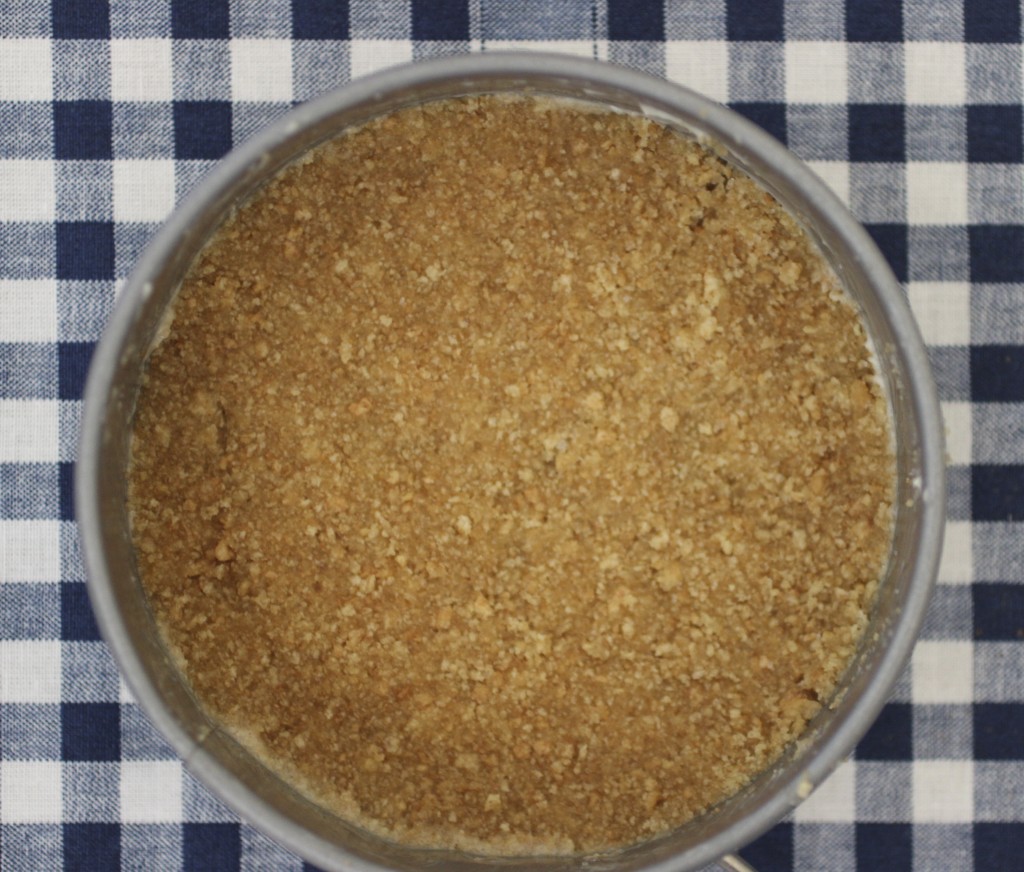 In a saucepan scald the heavy cream.  Set it aside for about five minutes and add the chocolate to it.  Mix until combined.  Pour this into a mixing bowl and mix to cool until it becomes smooth. 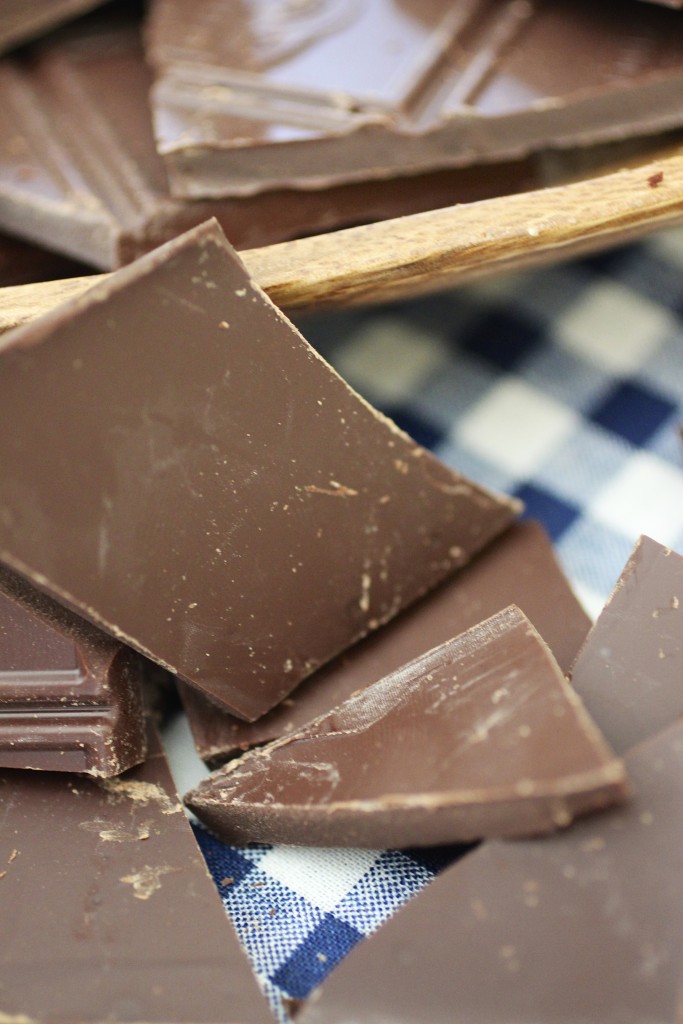 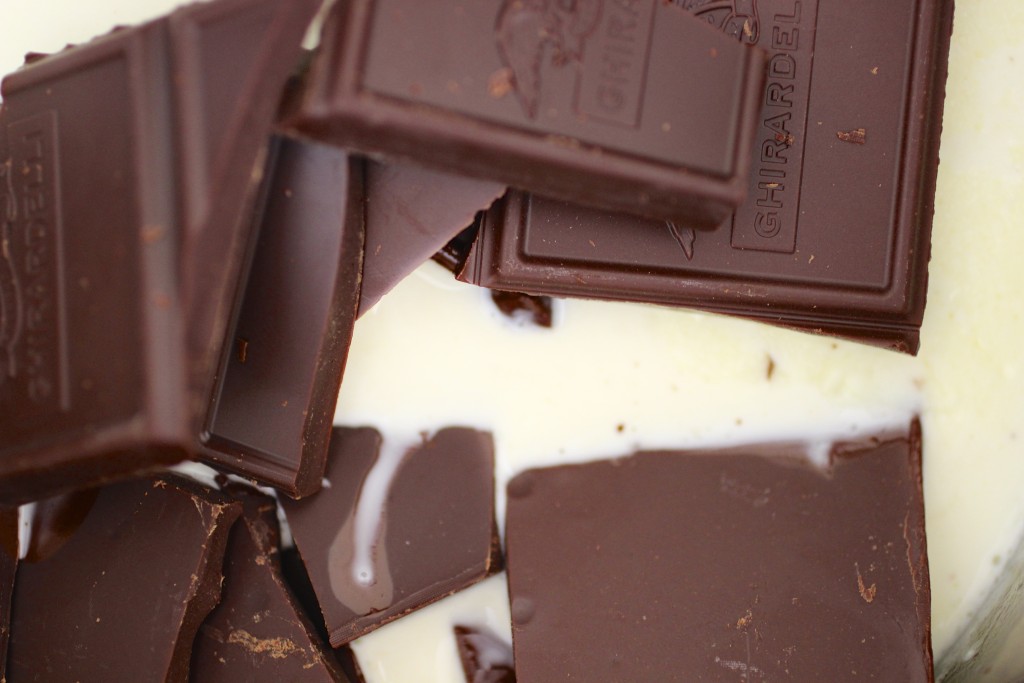 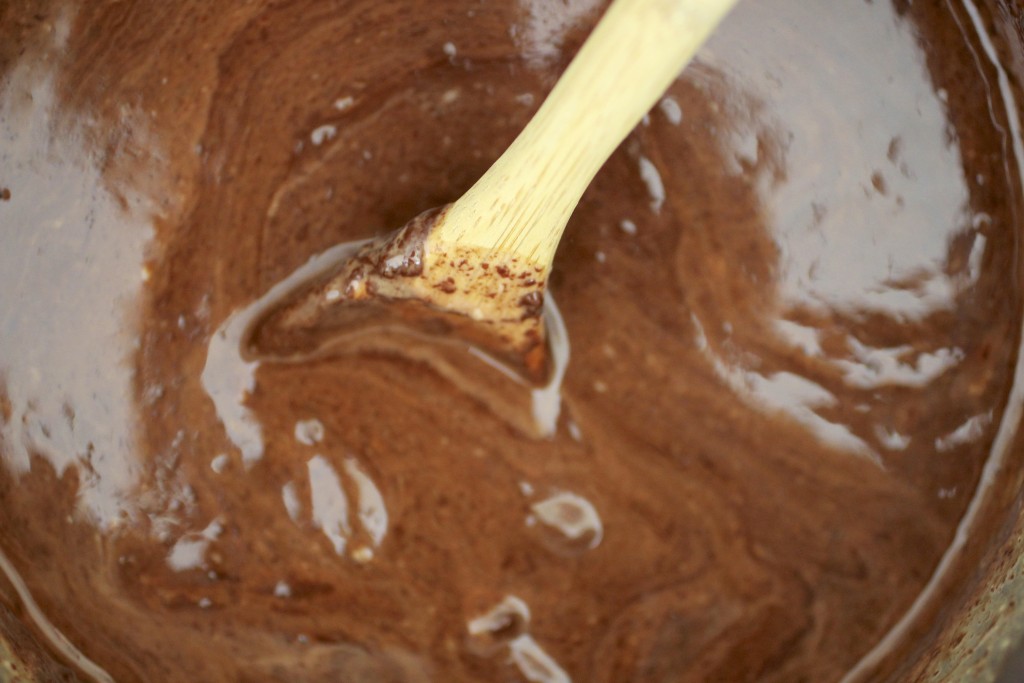 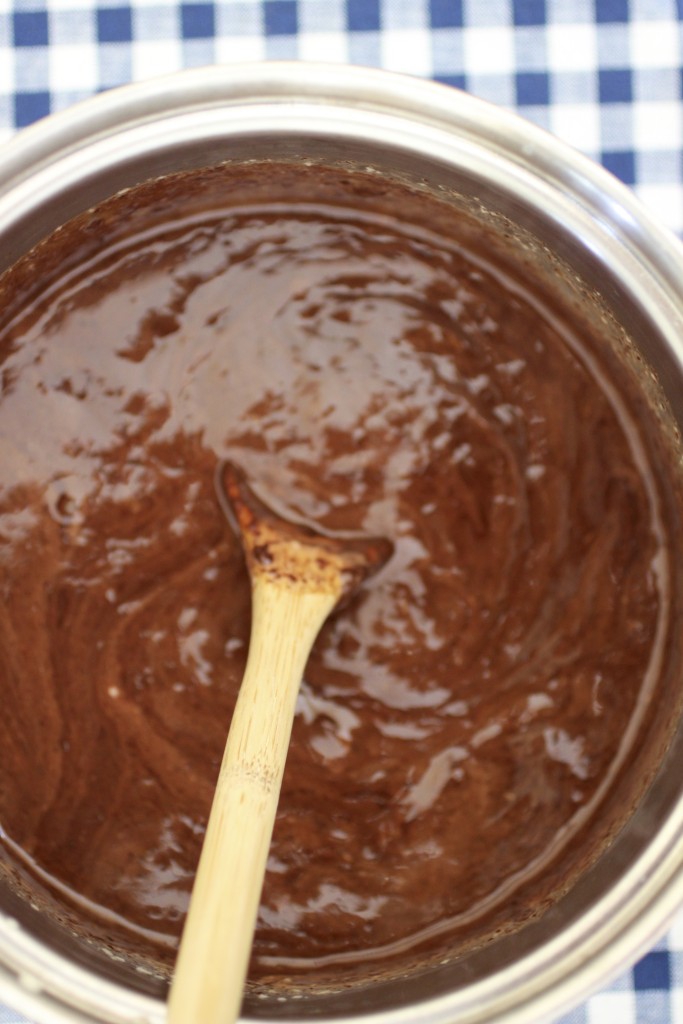 In a large bowl (mixer) beat the egg yolks with 1/2 cup sugar until the mixture is thick and lemon colored.  Add the chocolate cream and mix until well combined.

In a food processor mix the cream cheese, sour cream, cornstarch and maple extract.  Blend until smooth.  Add the cream cheese mixture to the chocolate mixture and stir until batter is well combined. 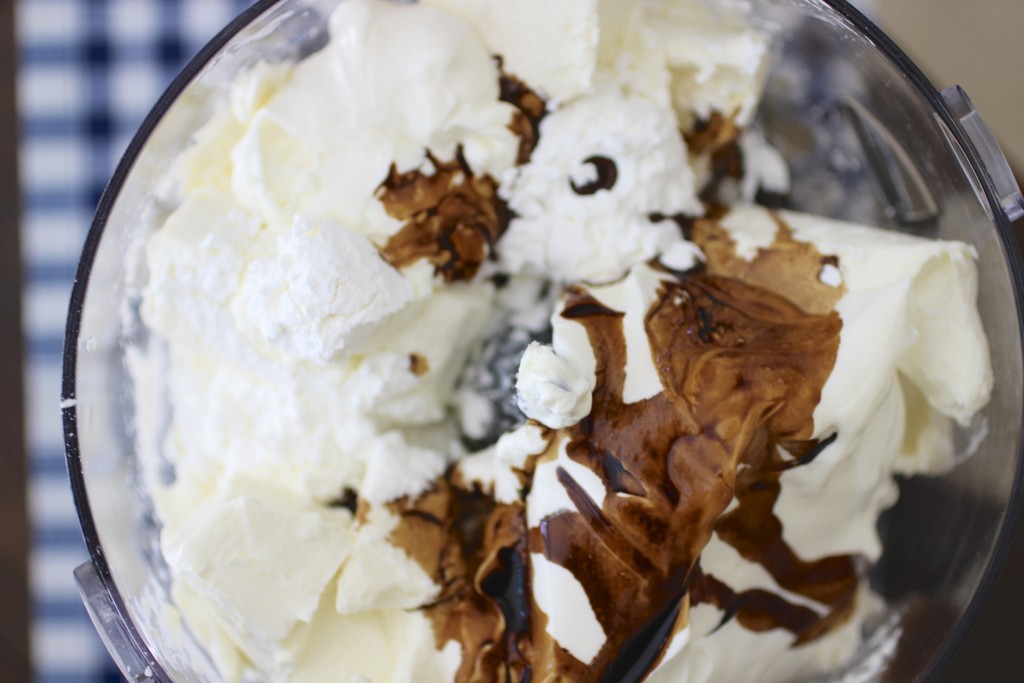 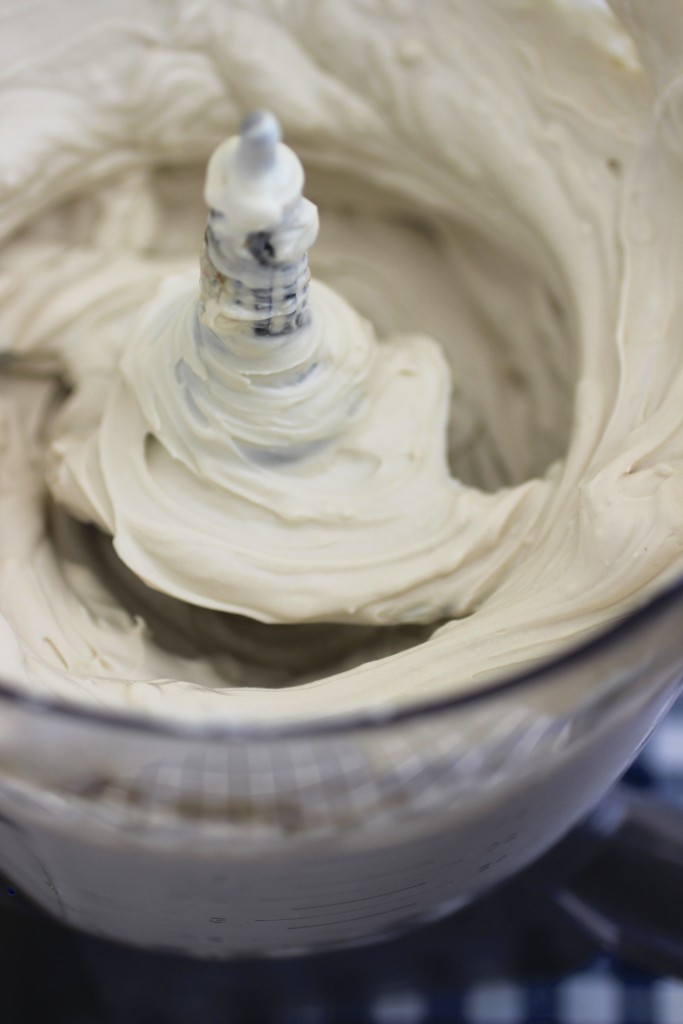 Preheat oven to 300.  I’m going to stop here a second.  As some of you know, we have recently moved.  Our new kitchen has a double oven.  I turned the oven on.  I waited until it reached 300.  I opened it to eventually put my cheesecake inside only to find the pan would not fit!!!! What is it with double ovens? I can see they may come in handy if you are cooking more than one thing.  But really. I had to remove a (hot) rack just to fit in my pan.  What are we going to do at Thanksgiving?! Gripe over.  But I still don’t think a turkey is going to fit…

In a bowl with the mixer beat the egg whites with the salt until frothy.  Add the cream of tarter and beat until the whites hold soft peaks.  Add the remaining 1/4 cup sugar and beat the whites until they hold stiff peaks.  Fold this into the chocolate mixture.  Pour this batter into your pan and then place the springform pan into a baking pan and fill half way up with hot water. 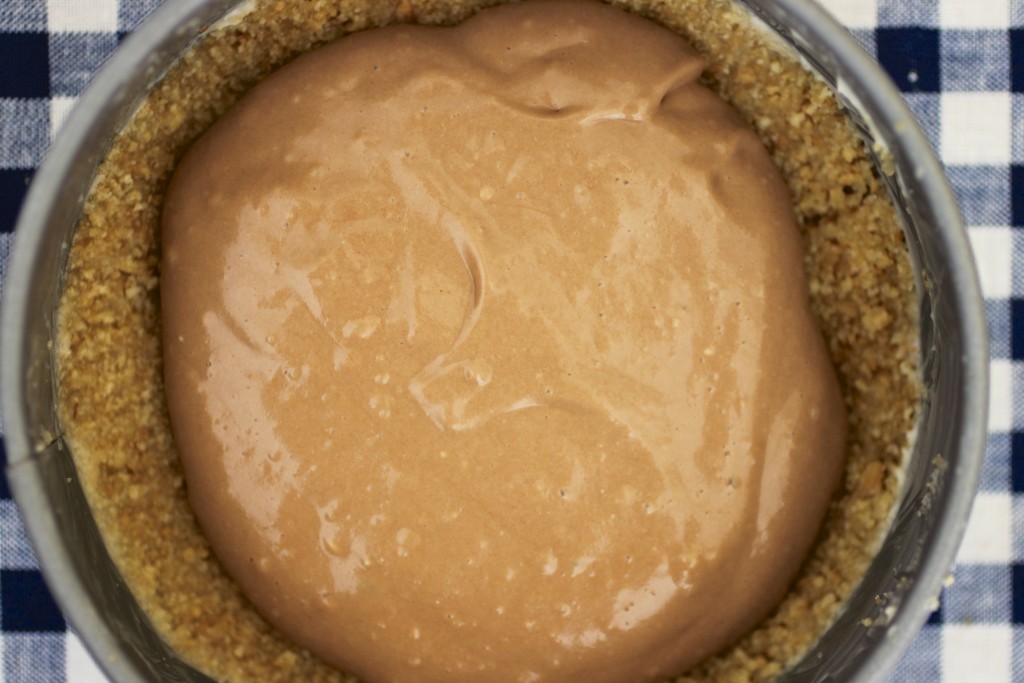 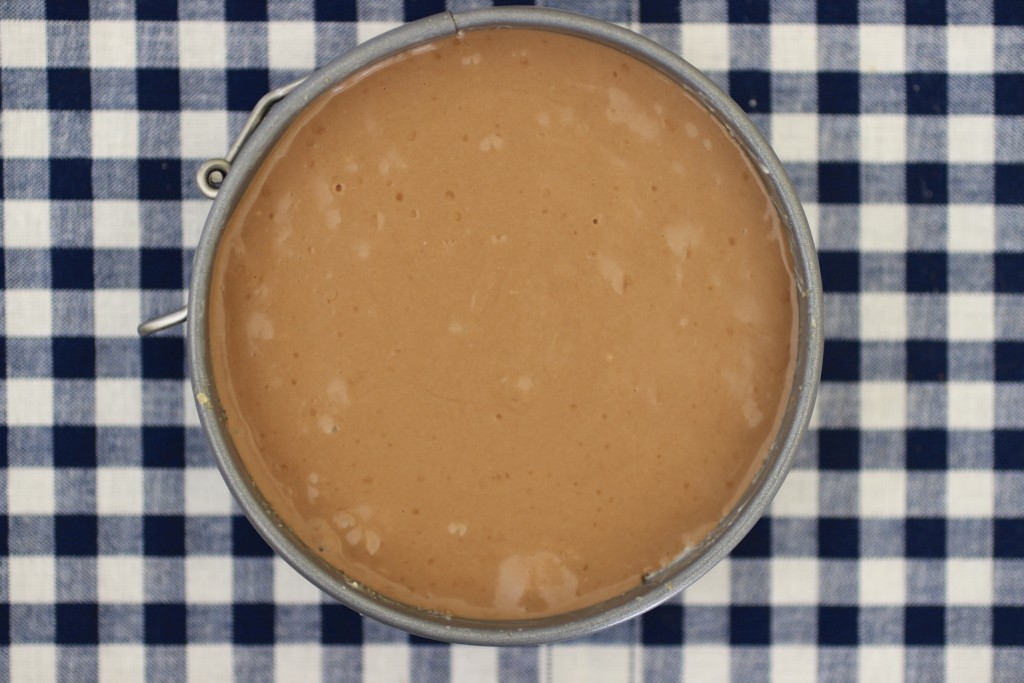 Bake in the middle of an oven for 1 1/2 hours.  Turn off the heat but DO NOT OPEN THE OVEN DOOR.  Let the cheesecake stand in hot oven for an additional hour.  Set the cake in the pan on a ranch and let cool completely.  Chill the cheesecake for 2 hours loosely covered.  We actually chilled ours overnight.  By the time we got this far there was homework to be done…dinner to be made…stories to be read and so on.  (I told you it was a process….)  There was so much batter that we decided to make a large cheesecake and a little mini one.  In the end we decided to freeze the large one for an upcoming party and serve the mini one which, for our little family, was just the perfect size. 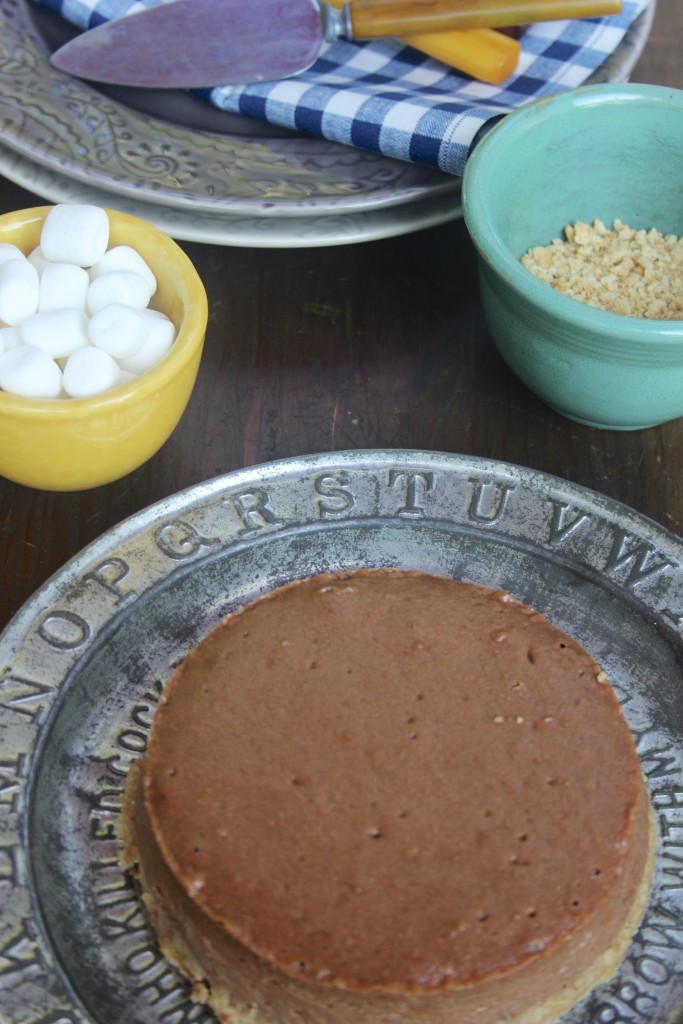 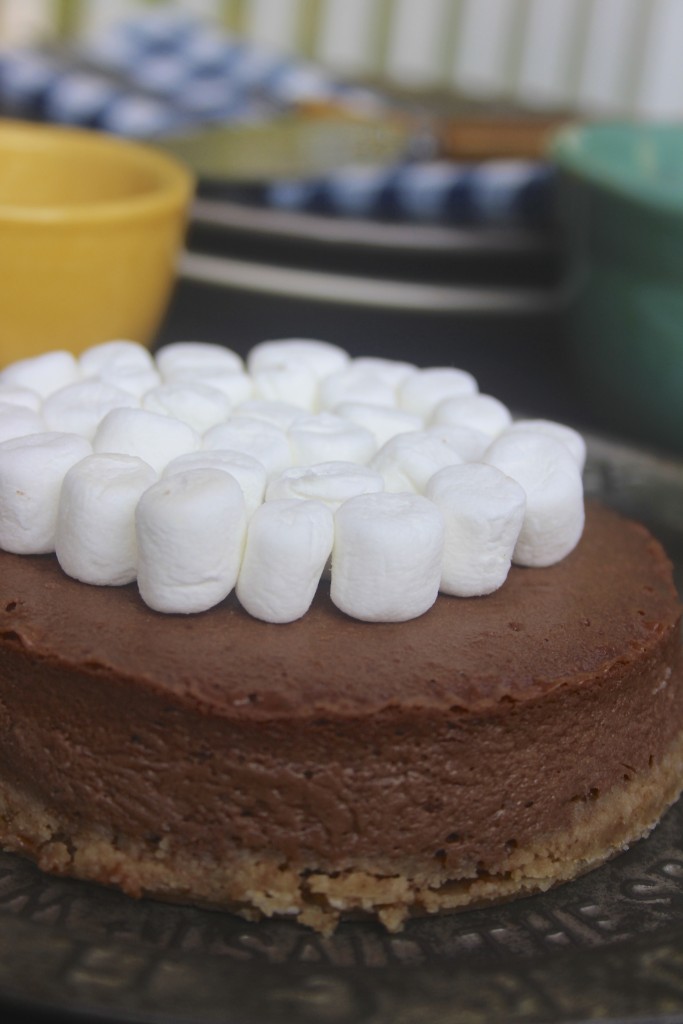 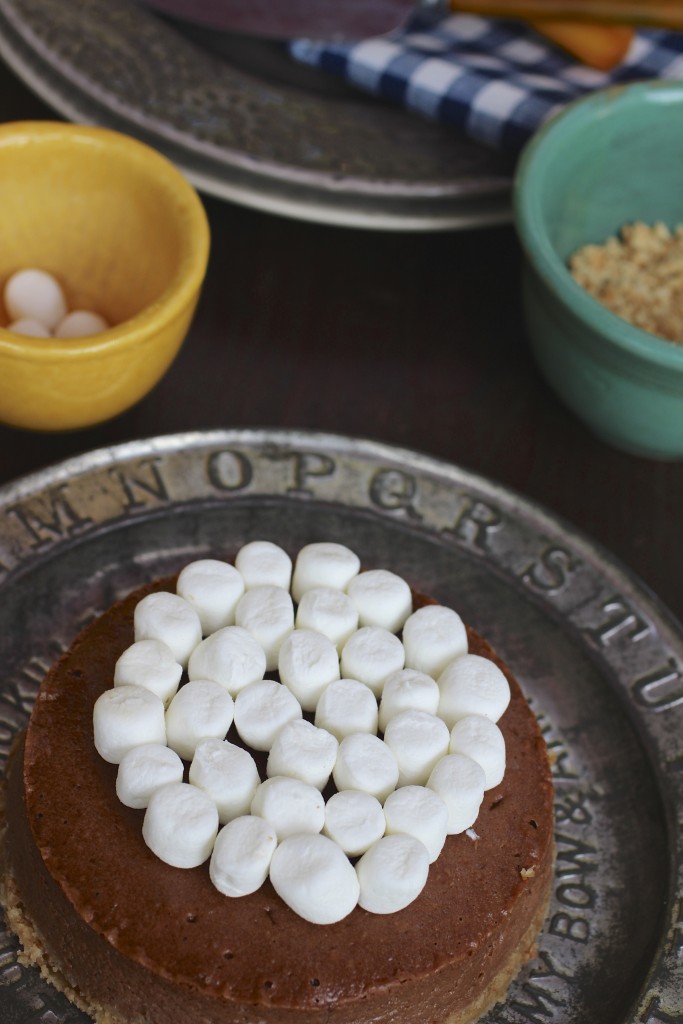 When we were ready to release it we placed it on a cookie sheet, topped it with mini marshmallows and stuck it under the broiler for a few minutes- just until they began to melt.  It was drizzled with chocolate sauce and sprinkled with graham crackers.  So, so good.  Creamy.  Crunchy.  Sweet.  Melty.  I do think if you have a little butane torch that would work best on the marshmallows.  (I am sure we have one but we are not totally unpacked from our move and, along with our knife sharpening steel, it has not yet been discovered amongst the remaining boxes.) So this recipe will definitely go down as one of our favorites…and eating it is far less messy than making s’mores in your fireplace when you have a light colored couch and two young children. 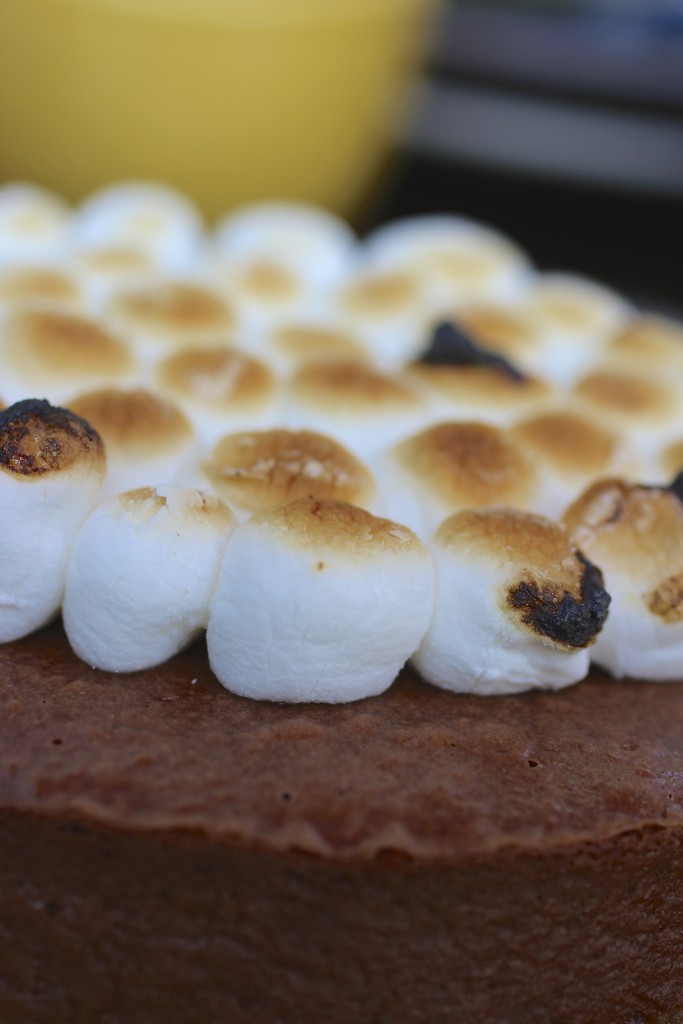 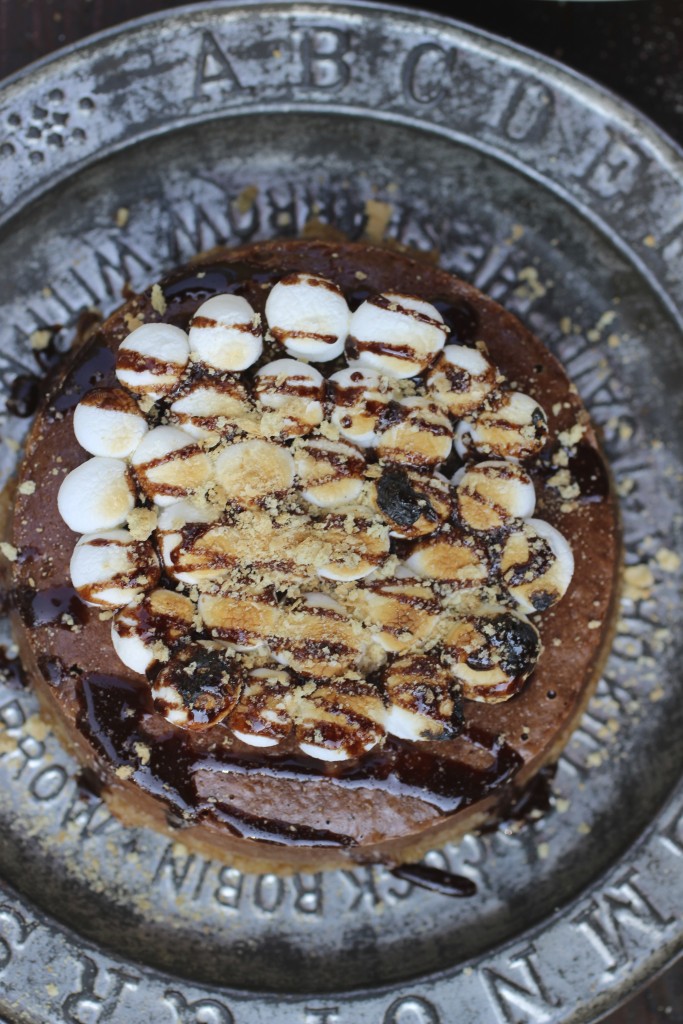 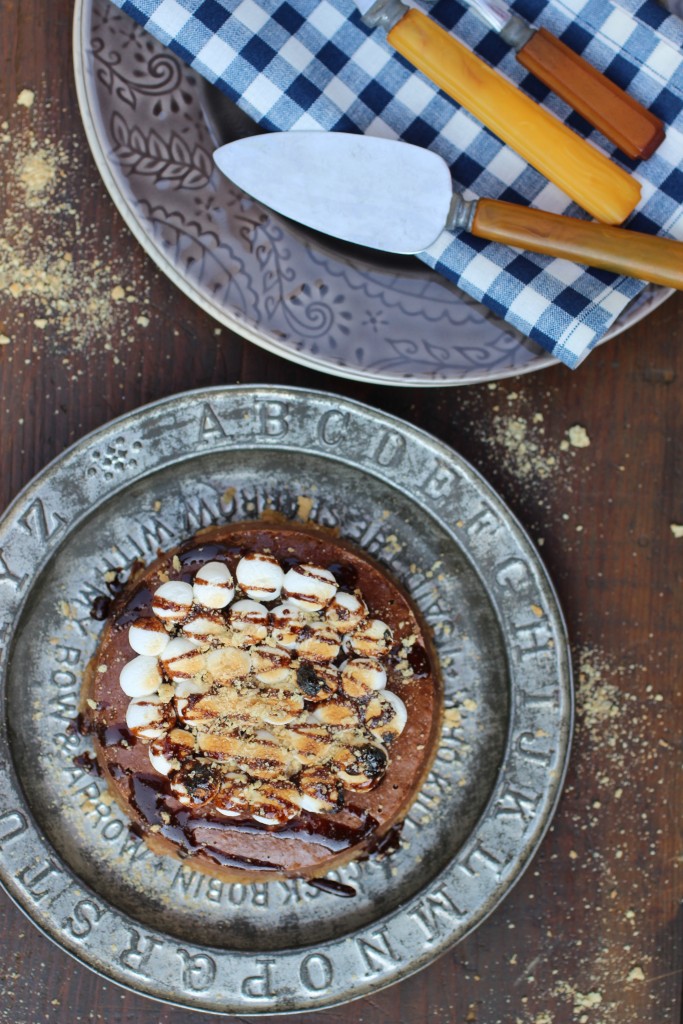 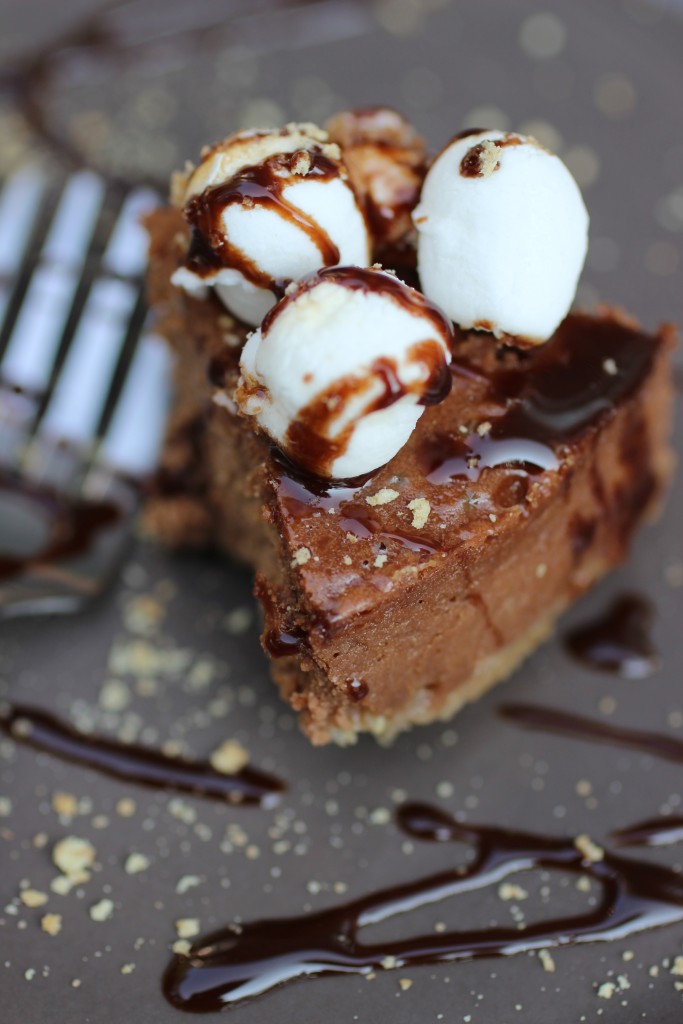 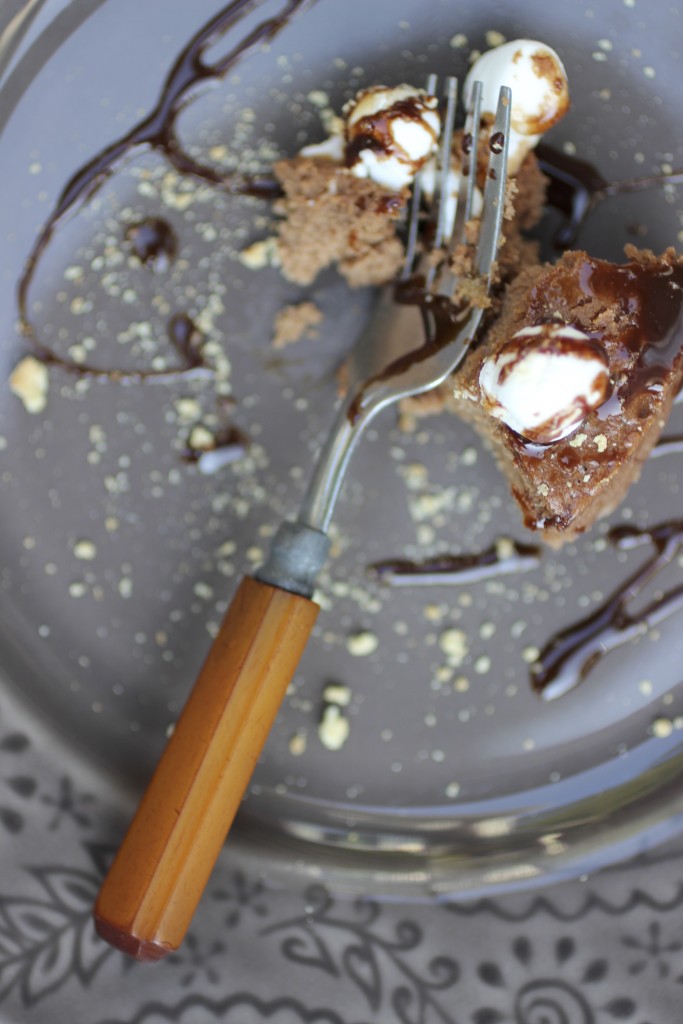