I went to a very small liberal arts college in New England.  It was old.  The basement had dark, drippy tunnels and there were rumored to be ghosts in the older buildings on campus.  It was a place that was full of artsy hippy type people from Connecticut and California.  There would be big parties on weekend nights and you could always hear The Grateful Dead playing on someone’s turntable (because, yes, people there were cool enough to have turntables rather than cd players).  I was not a hippy.  And I was not a party person.  And no, I did not go to college in the 60’s or 70’s or even 80’s for that matter.  But the weekend noise was sometimes enough to keep you from sleeping.  Sometimes a few of us would wander down into the somewhat creepy basement to the vending machine where you could buy totally unhealthy snack items.  You might have even been able to buy cigarettes (because it was that long ago).  Of course, I didn’t smoke.  I’d stock up on Frito corn chips and plain M&M’s.  When I’d get back to my room I’d mix them together in the Frito bag and my night would be instantly better.  I’m sure it was the salty sweet combination that I loved, but it was a combination that stuck.

Last night I was reading a book about cupcakes.  And that is when the brilliant idea hit me over the head.  What could possibly be better than a chocolate cupcake with this salty-sweet topping?! I have a fierce love of cupcakes.  I think it is because as a child with a summer birthday I never got to bring them in like the other kids did on their school year birthdays.  And so, at our house, we just didn’t make them often.  Now I make them whenever I get the chance.  They always look better in my mind than they do in reality.  I think it is all in the piping bag.  I can’t find our real tips and piping bag (most likely still in an unpacked box in the basement) and so I bought a cheap one at the market the other day and let me tell you…it was garbage.  My mom always says “you get what you pay for”…in this case she is right.  The piping bag I was using for this concoction started busting open at the seams and left me with a lot of chocolate frosting oozing out every where but on top of the cupcake.

I used my favorite cupcake recipe from Martha Stewart’s book called Cupcakes.  I know you can easily go out and buy a cake mix and save yourself the trouble of making the cupcakes from scratch.  But they don’t taste the same.  And while I do make boxed cupcakes, when I have the time I try to make my own.  I’ve yet to master the frosting.  It is delicious.  It is sweet.  It is chocolatey.  However, it is not as pretty as I’d like it to be.  I was using a simple buttercream.  1 stick of unsalted butter which was cold and whipped for about five minutes.  To that I added 1 splash of vanilla, 1 tablespoon of cocoa powder and 1 cup of confectioners sugar.  The key ingredient (so I’ve been reading) is heavy whipping cream.  I added about two tablespoons.  This mixture was whipped some more until it had the consistency I was hoping for.  I piped the frosting (sort of) onto the cupcakes and then dipped them upside down in crushed Frito chips and smashed up M&M’s.  The end result might not be for everyone…but in my little world it was amazing.  Soft cake.  Smooth frosting.  Crunchy topping that is both salty and sweet.  A taste memory.  Don’t knock it until you try it! 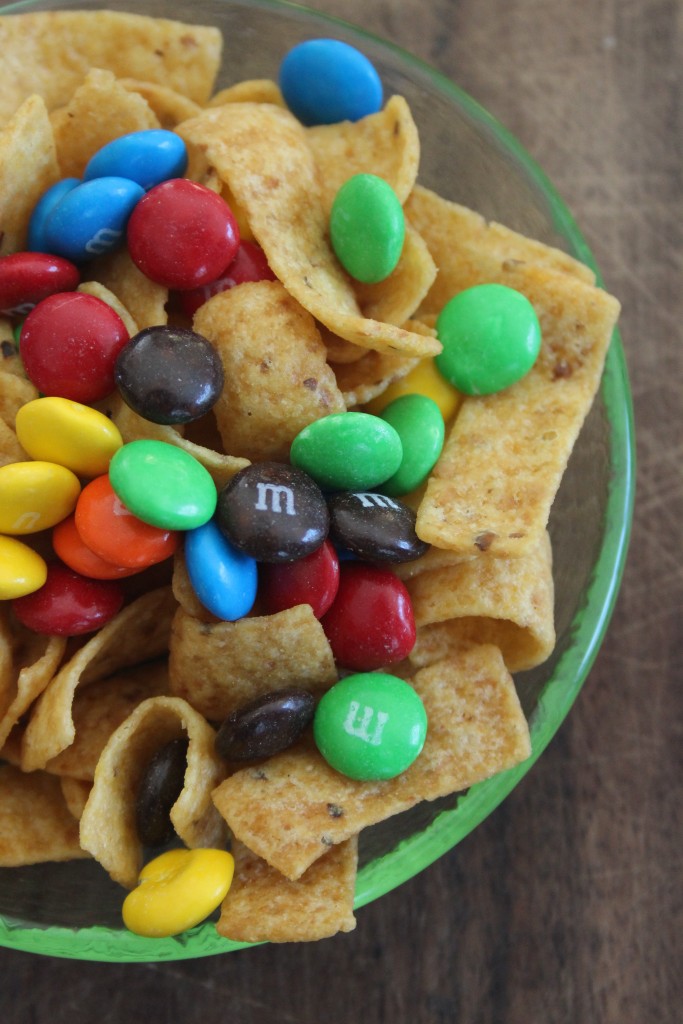 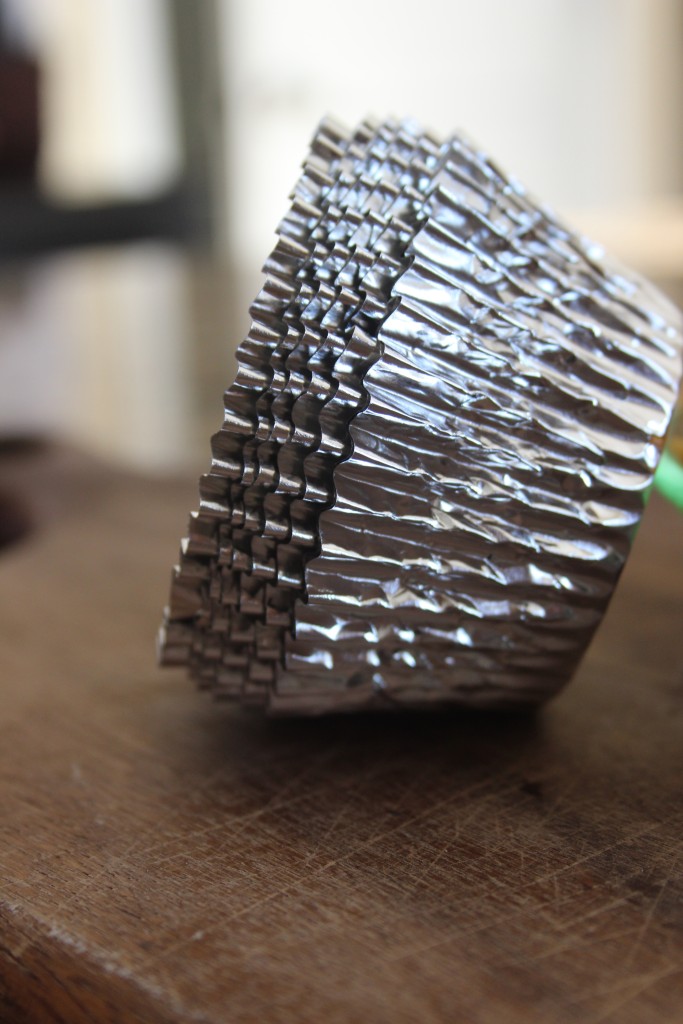 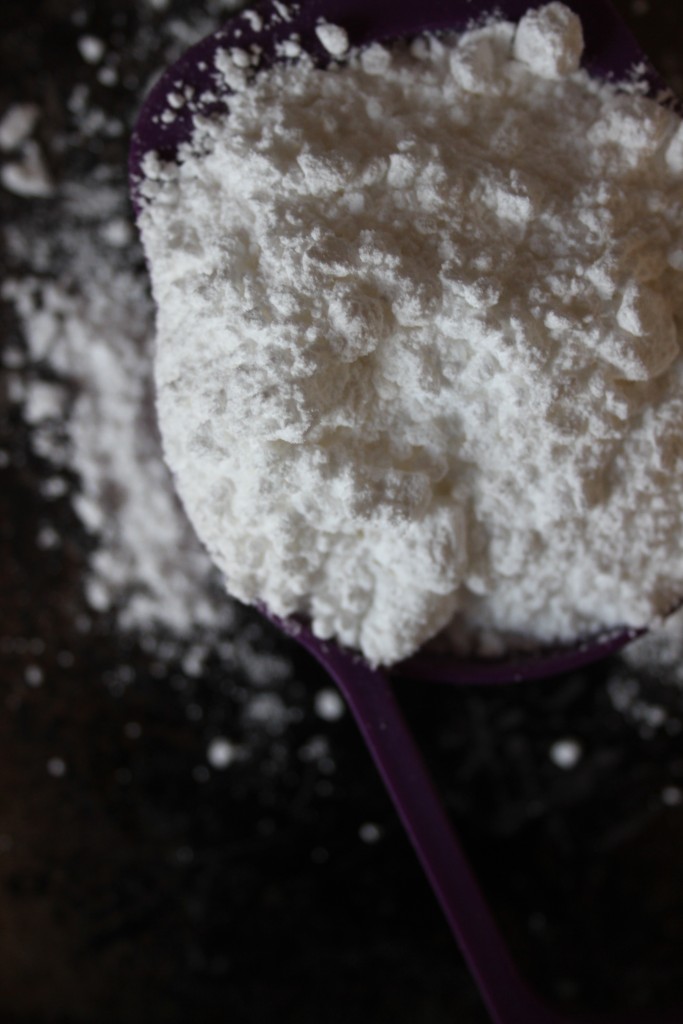 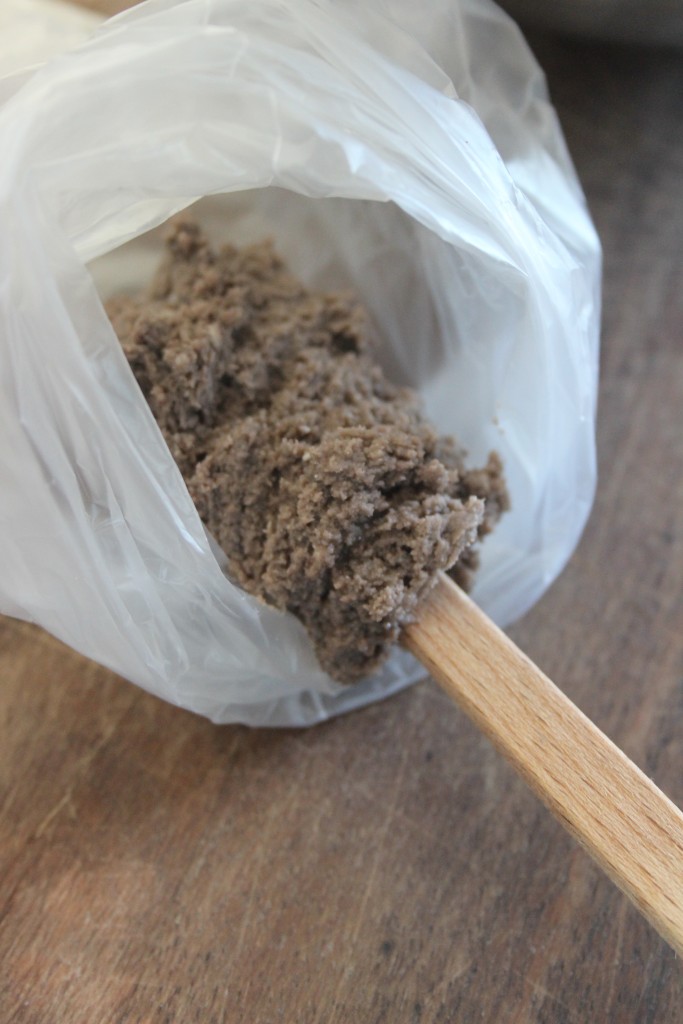 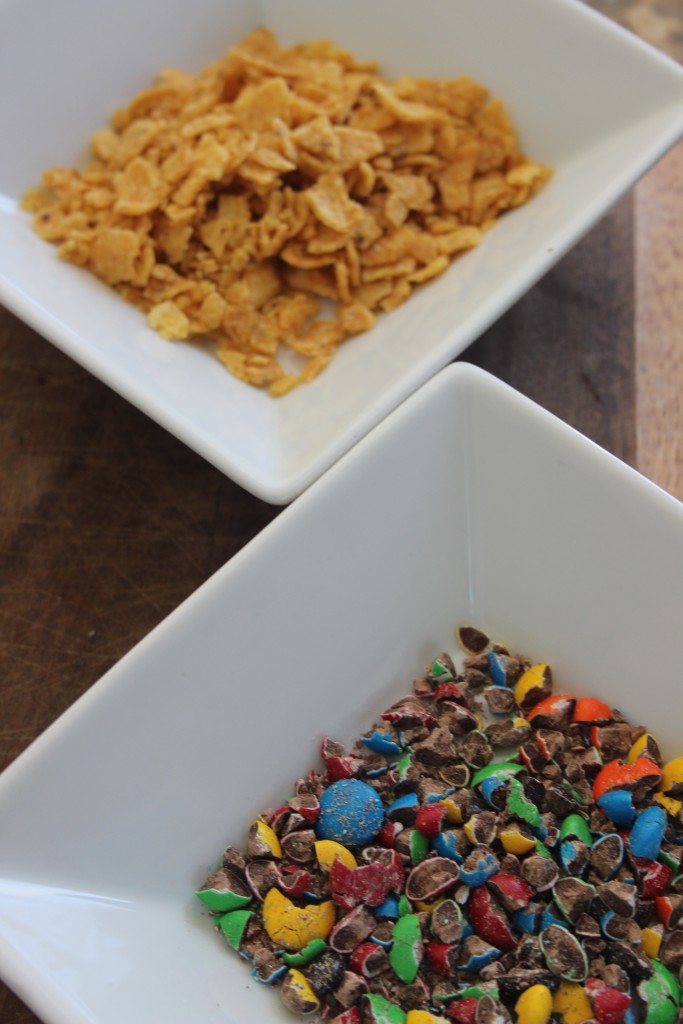 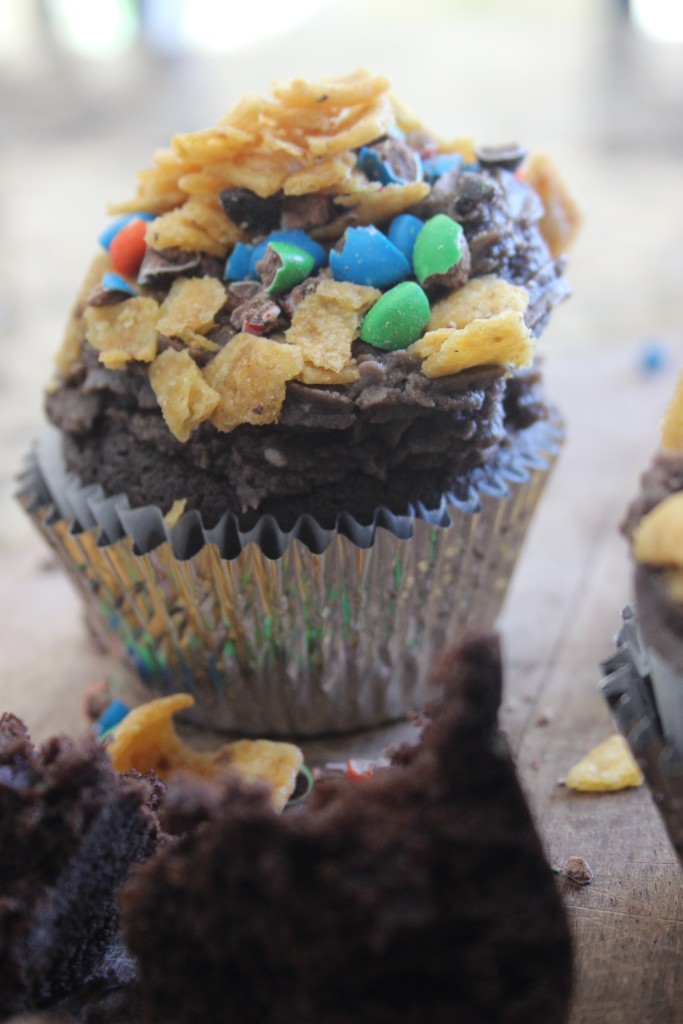 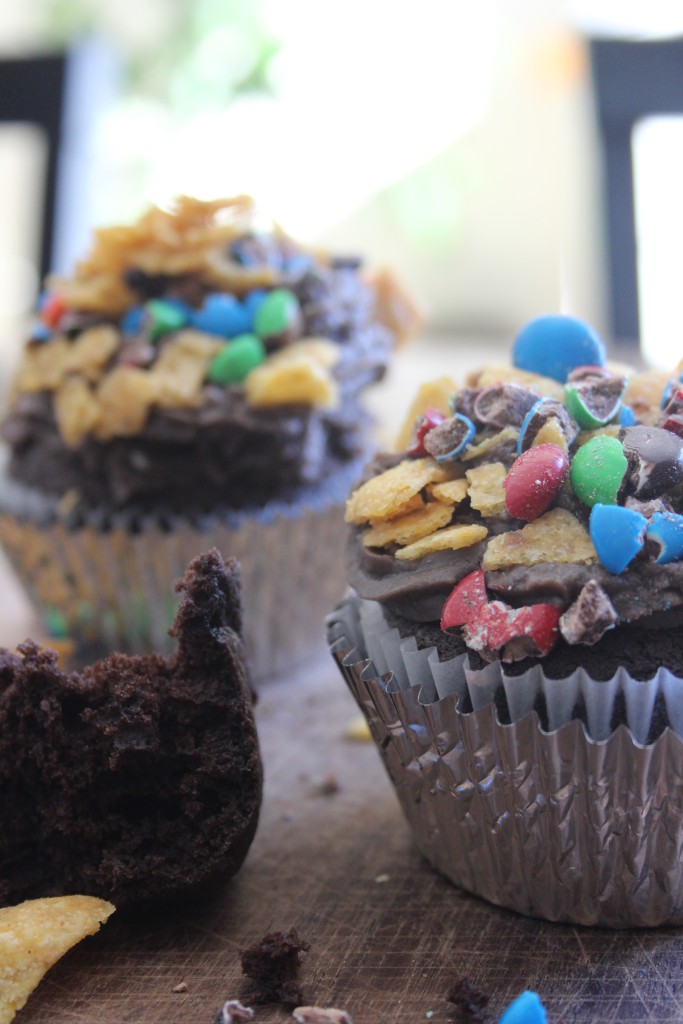 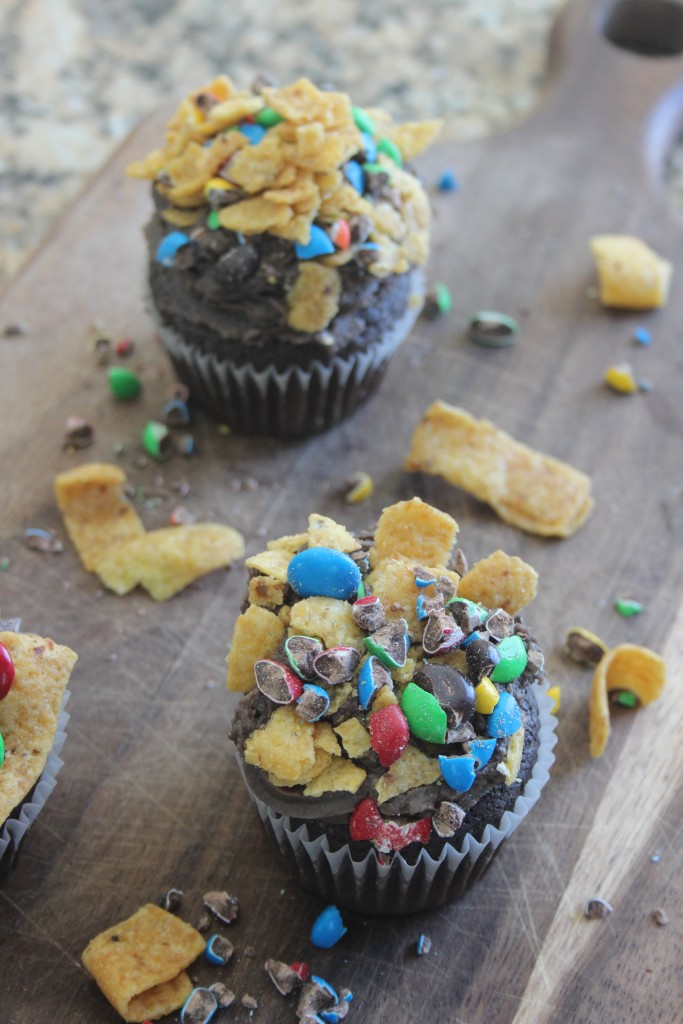 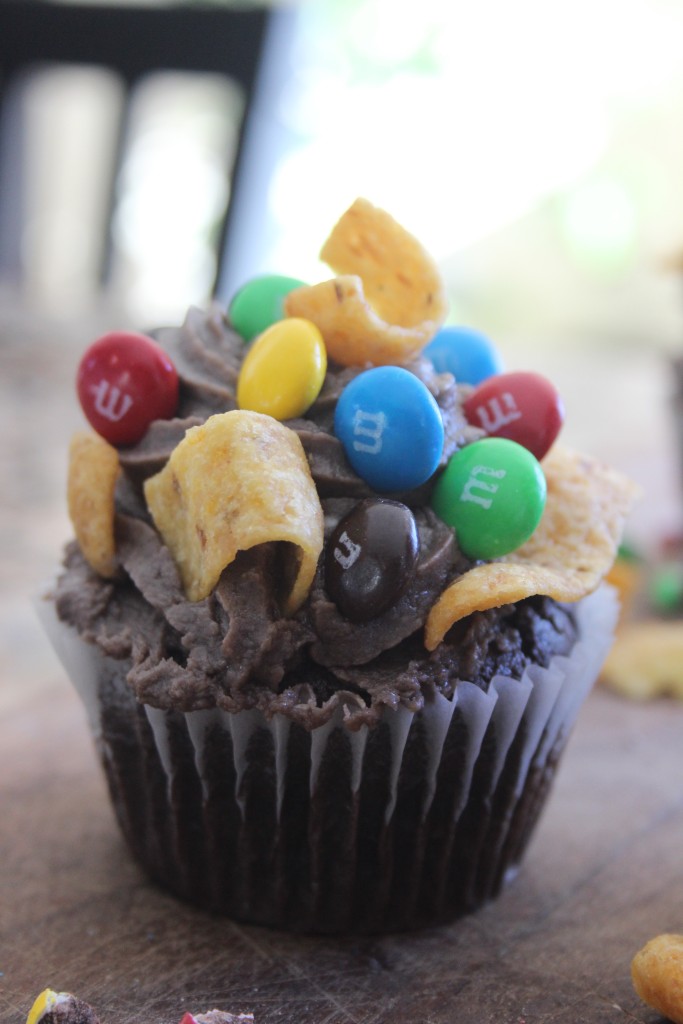