As you can imagine, we spend a lot of time watching the Food Network and The Cooking Channel.  This morning before work I caught an episode of Elli Krieger’s Healthy Appetite.  I like Elli Krieger.  I have not made a recipe of hers that did not turn out to be delicious.  After a long winter of eating comfort food and cheese, I was ready to be inspired by something on the light and healthy side.
She was making baked falafel pita sandwiches.  I jotted down the recipe and stopped at the market on my way home from work to pick up the ingredients.  It is about 90 degrees here tonight, so it was the perfect pre-summer dinner (minus having to turn the oven on).  I decided to make my dinner into a salad rather than the pita sandwich.
Ingredients:
Falafel:
1 15 oz. can of chickpeas
¼ cup of cilantro, chopped
2 cloves of garlic, minced
¼ cup of an onion, minced
2T of ground cumin
1t of ground coriander seeds
1t of salt
2T olive oil 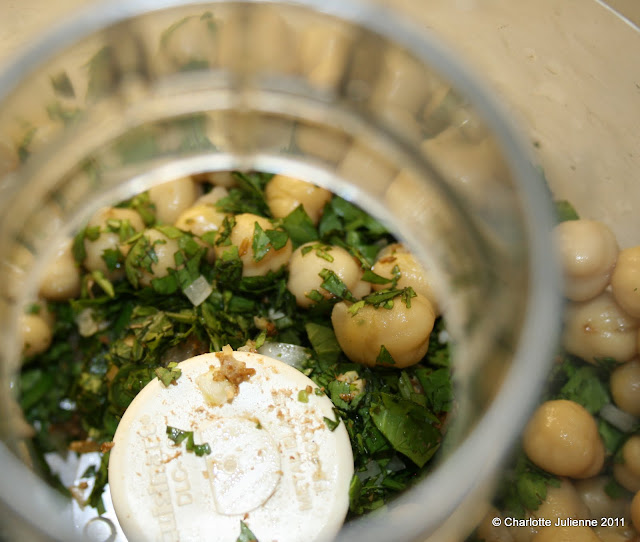 Add all the ingredients (minus 1T olive oil) to the food processor. 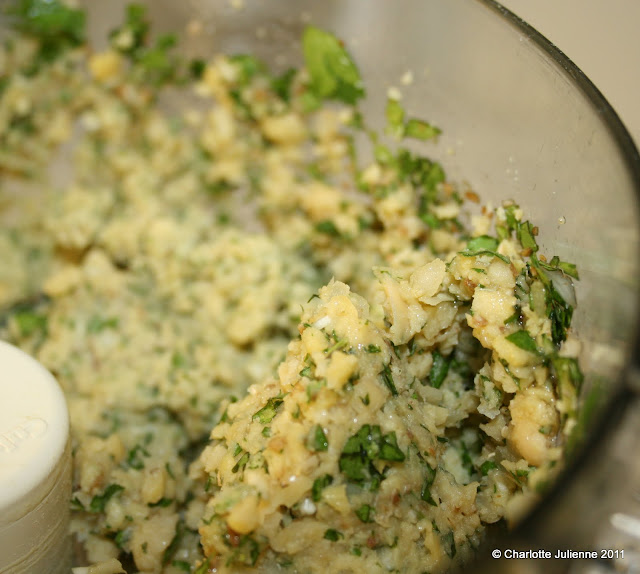 Pulse for 10 seconds and then scrape down the sides of the bowl.  Pulse for an additional 10 seconds. 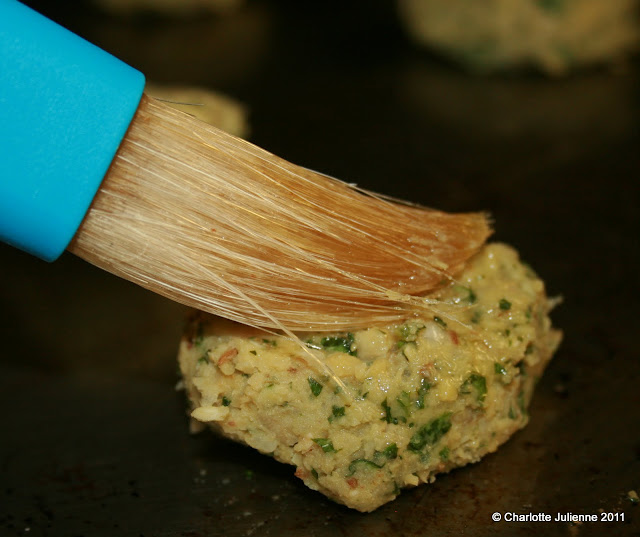 Form the mixture into little flatened balls and brush both sides with olive oil.  Bake at 425 for a total of 20 minutes.  Flip over at 10 minutes. 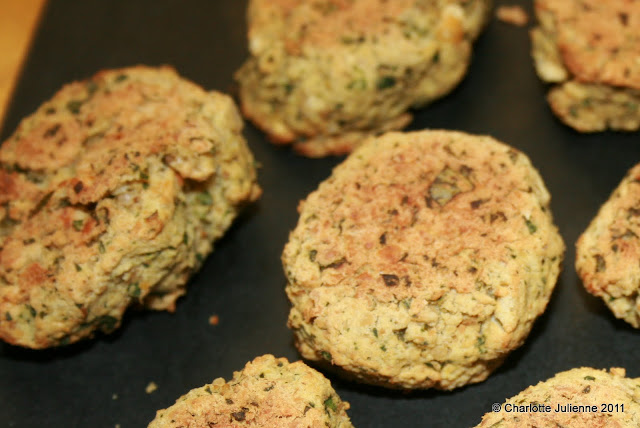 When they come out of the oven let them cool.  They should be slightly browned on both sides. 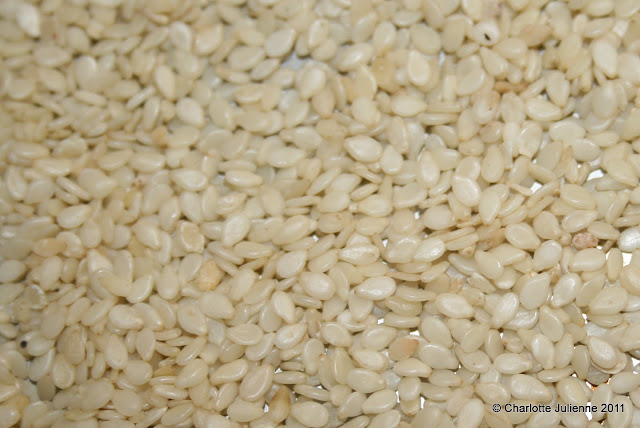 We did not have tahini at home.  This was a huge disappointment to me as I thought we did.  I decided to make my own and in the end was quite happy with the result.
Toast seasame seeds for five or ten minutes in a 350 oven.  Toss frequently. I used about 1/4 cup and a couple of tablespoons of olive oil. 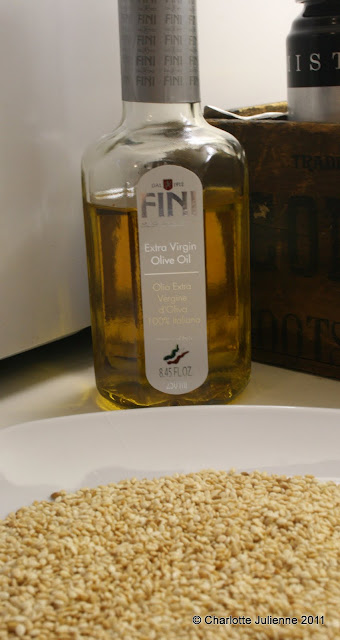 After the seasame seeds have cooled for about twenty minutes, blend with olive oil. 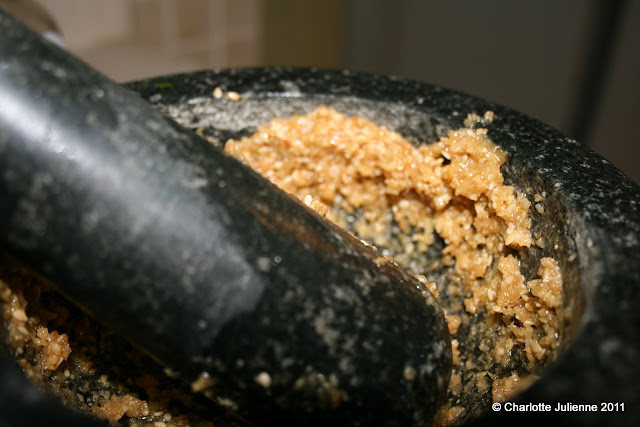 After numerous attempts of blending this mixture, I finally gave in and did it by hand in my mortar and pestal. The small amount of seasame seeds I was using prohibited me from using the food processor, the blender or the coffee/spice grinder. 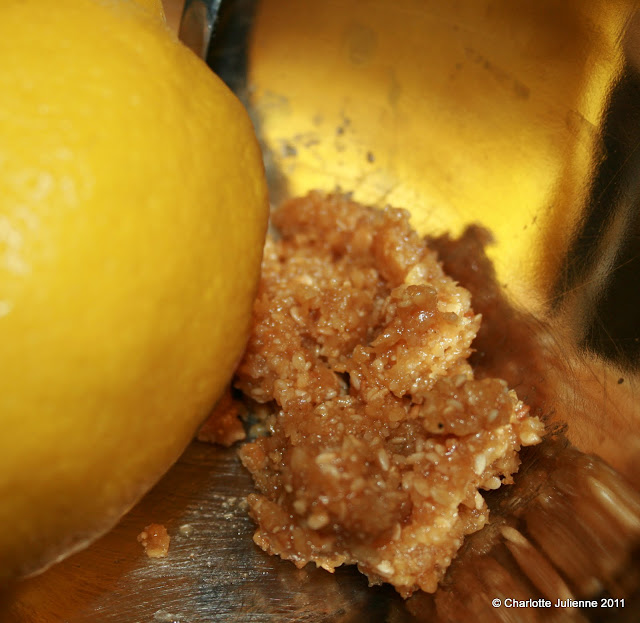 The result will be a thick paste.  Add this paste to the juice of a quarter of a lemon, and two tablespoons of water.  I also added a small spoonful of salt for taste.  Mix well unti the mixture resembles a loose dressing. 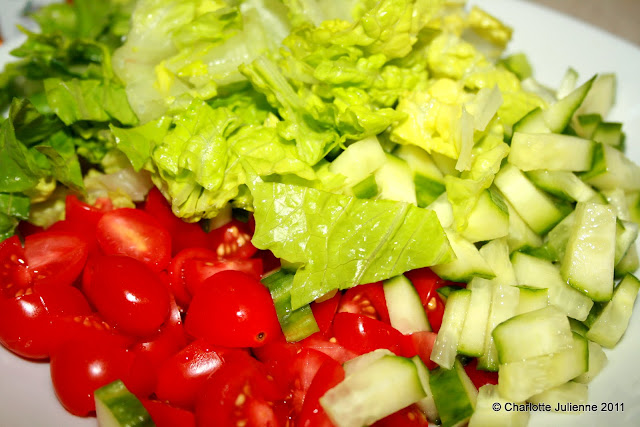 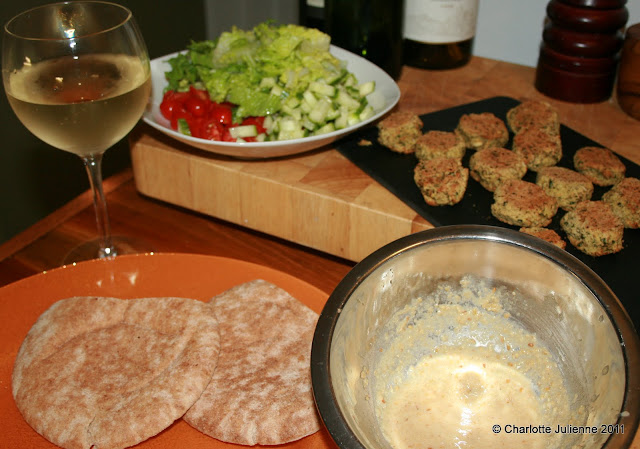 Assemble your falafel salad: – here I toasted two whole wheat pita breads which I then sliced into long strips. 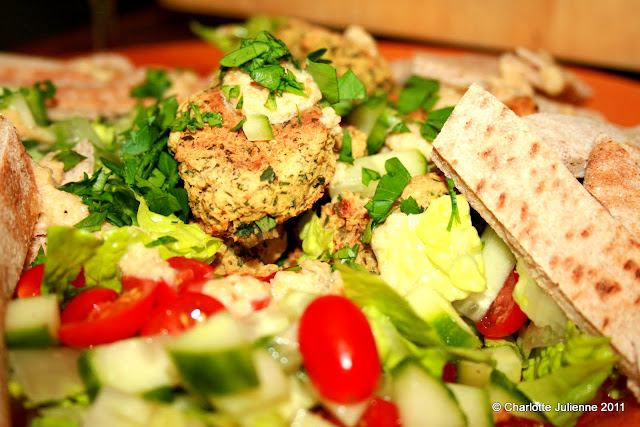 Layer your plate with the lettuce mixture, the falafel and the tahini dressing.  Place the toasted pita on the side.
This salad has a light taste with so many different textures; the crispy lettuce and soft, warm pita bread, the crunch of the cucumber and the crunchy yet mealy falafel, and then the zing of the lemon in the dressing.  It is fantastic.  I should confess, I’ve only had falafel once before (in a school cafeteria) and really do not have anything to compare it to.  As these are baked, I’m sure that regular falafel eaters might have a stronger opinion.  For a girl whose most exotic meal growing up was American Chop Suey, this is a step in the right direction!