So, like most mornings, the kids were up at five thirty begging to watch The Jetsons on Apple TV.  Until recently I never realized how sexist The Jetsons were (because of course I hadn’t seen it in thirty plus years)…but being that we do not have cable I have now listened to (from various rooms in the house) every episode from the 1960’s version at least a few times.  I might have to remove it from the viewing line up.  What happened to their love of Word Girl?! By six thirty they had eaten breakfast and requested a snack.  By seven they were bored and I was wondering how I was going to get through the rest of the summer.  I needed help.  Desperate, I plugged them into their iPads and resorted to Pinterest where I quickly searched for no-bake “baking” projects for kids.  And there it was.  The most beautiful photo on my screen.  Gorgeous perfectly sugared pastel circles.  I didn’t even care what they were.  They were so pretty I knew we had to make them.  When I clicked on the web site I was overwhelmed with the perfection this mother/ blogger has.  She must be young and patient.  I’m sure she isn’t drinking wine at five o’clock most afternoons.  Maybe she has a Starbucks near her house.  She has gorgeous ideas.  Beautiful photographs.  I wanted to be her kid.  You should really check it out if you have kids.   The video said it was easy.  Not sticky.  Simple.  Hmmmm.  Maybe at the house of perfection, but my little bakers managed to get sugar on every surface in the kitchen and batter all over their hands, faces and arms all while insisting they were not eating it.  The atrocious behavior that followed five minutes in made me sure they had, indeed, eaten every scoop that stuck to them.  Nonetheless, they accomplished a baking project.  No bake actually.  That was the draw of it.  So yeah- if you make these with kids be prepared for a possible sugar mess.  If  you make them on your own I’m sure they will look just like the ones in the photo from the other blogger 🙂 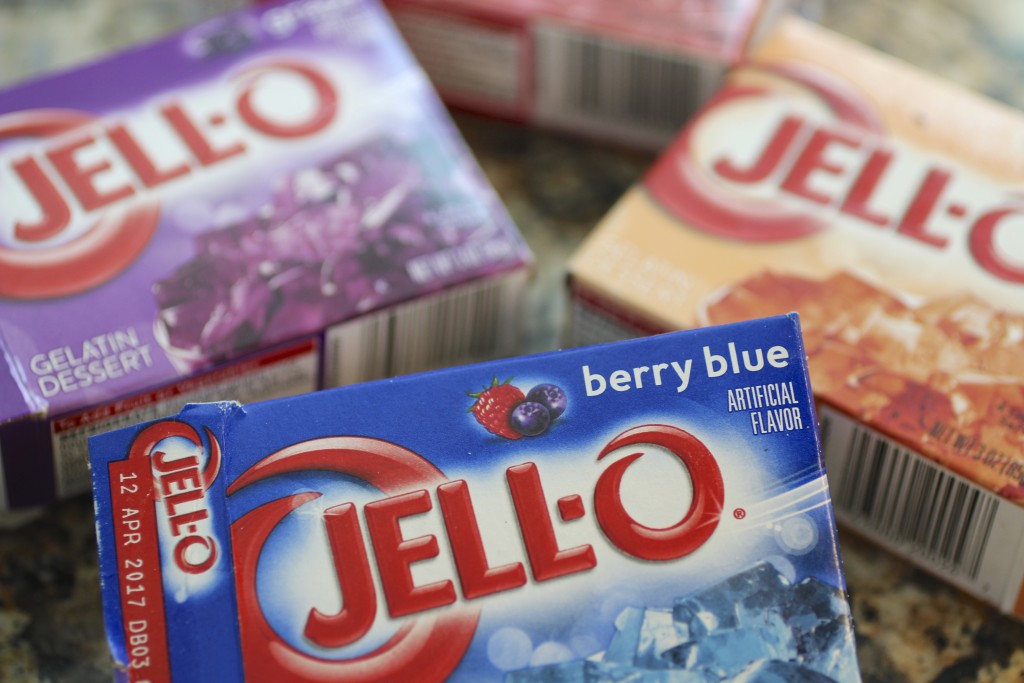 We started by selecting four of our favorite Jell-O flavors.  That was the fun part, the colorful boxes.  The sparkly pictures on the front of the wobbly Jell-O.  It seemed fitting for a morning that began with a cartoon from the 1960’s.

In a mixer we combined 8 oz. of cream cheese with 16 oz. of powdered sugar and mixed until the ingredients were light and fluffy.  This is where the original blogger says it will not be sticky.  It was a hot day here and our cream cheese was melting a bit so we kept adding more powdered sugar until the mixture was able to be handled.  Unfortunately, we did not find this out until after we had handled it a few times.  Hence the batter on faces, arms and countertops.

The mixture was divided into four bowls and a tablespoon of our selected Jell-O sugars/powders were added to each and stirred (very carefully) with a spoon.  We created little balls in the palms of our hands and then dropped them into bowls of granulated sugar before we flattened them out and put them on parchment.  This took a few tries.  And the rest of our bag of powdered sugar.  By now the kids were on an extreme sugar high.  The house smelled of various sorts of artificial flavors in an intense sort of way since it was not diluted with water.  The original blogger says that these treats do not last long in her house.  Do they not suffer from sugar highs? I’m that mom that only lets them try one.  Maybe that is why the sugar high is so escalated here.  Maybe that is why they cover their little faces, arms, bellies, legs, and any skin covered surface with it….so they can lick it off in hopes of discovering what most kids get to eat. 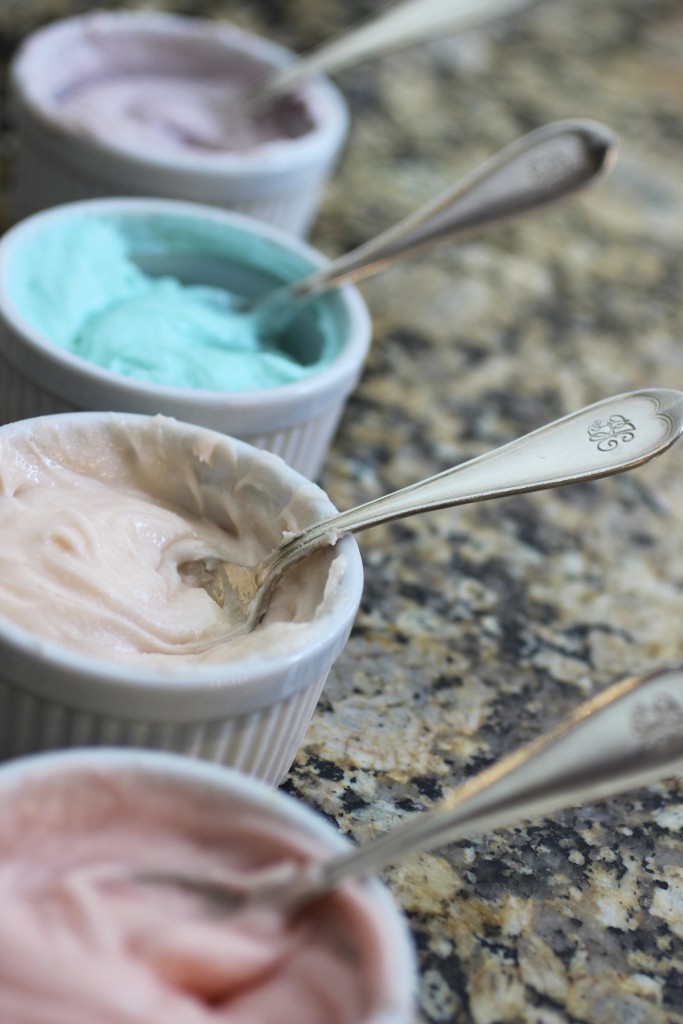 After they had hardened a bit in the fridge they did not look quite like the stunning photo on Pinterest.  So we used a circular cookie cutter to clean them up.  They tasted of something reminiscent of my childhood although I’ve yet to place it.  Cool-Aid powder? Fun Dip? Pink Lemonade? I’m not sure.  They are sweet as can be.  Even for this sugar addict.  There is no way in you know what that I’m letting my kids eat more than one a day.  Not unless someone wants to come babysit.  Any takers?! 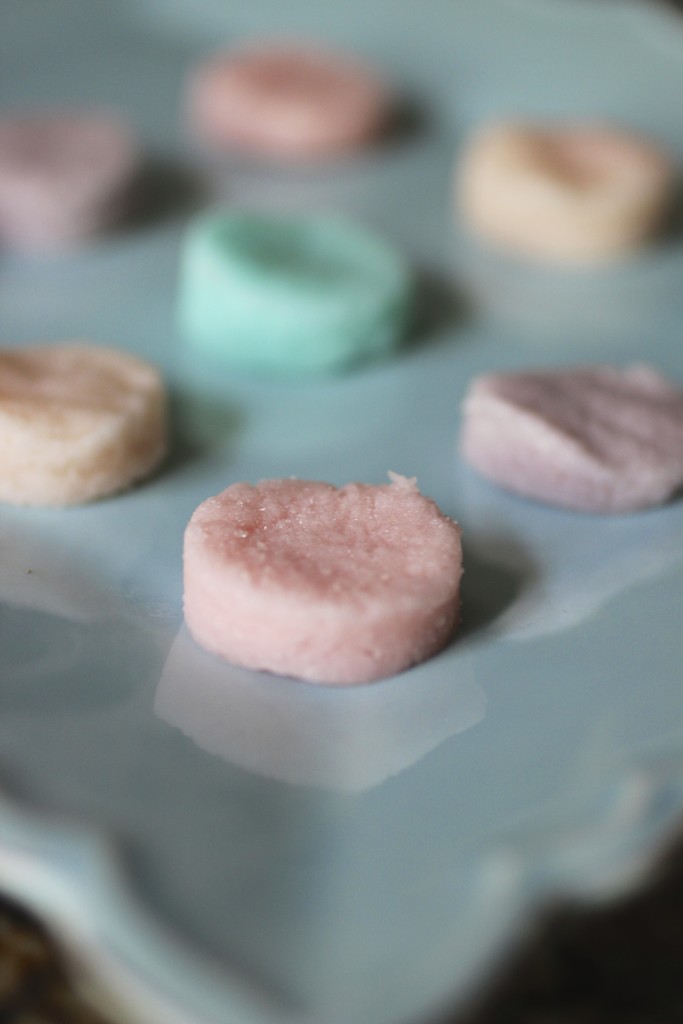