A few years back we discovered Tin Mustard and to be honest, have judged every other mustard against it since.  It is just so good and when you can find it, it’s really not worth using anything else.  But since we ran out we have also started making our own mustards at home.  A simple and rewarding process, it is also so cool to think hey- I just made mustard.  At home.  In the kitchen.  Maybe it is just us but we were pretty impressed with ourselves.  It doesn’t take much these days.  While there are so many recipes for mustards out there we love using beer in ours because it adds so much flavor.

Named number seven on Wine Enthusiast’s Top 25 Beers of 2017, Left Hand Brewing Co’s Milk Stout Nitro Beer had us from the packaging alone.  Known as one of America’s top-selling craft nitro beers, the four pack of cans runs about $9 and is absolutely one of our favorite nitro beers out there.  The addition of nitrogen to beer causes smaller bubbles and a smooth and creamy mouth feel.  This version has hints of sweetness and warmth with vanilla and mocha flavors.  When we make mustard at home we strive for a creamy, thick consistency with just a hint of sharpness.  Allowing the mustard to rest for about two to three days before using it, it should then be stored in the fridge.  While it will last up to six months, it is best used within one month.  So if you are making it you might want to get multiple jars and share with friends- you’ll have plenty and they will be so glad you did.

Making mustard is a real science- and there are lots of amazing recipes and web pages that will discuss how the seeds mellow (or not) depending on the use of cold or warm water in the process.  The process we used is quite easy but not a traditional mustard making process- we started by slightly grinding the mustard seeds, adding them to our pot along with the apple cider and beer and then bringing the mixture to a slight boil before adding the brown sugar, turmeric, allspice, kosher salt and thyme.  We let this thicken for about twenty minutes before removing it from the heat and allowing it to cool completely.  Before jarring it we added more thyme.  The mustard will mellow the longer it sits but we are generally happy with it after two to three days.  We love to serve it with homemade sausages or on crackers with salmon which we smoke at home.  While our version has a subtle beer flavor, you could boost that flavor by allowing your mustard seeds to soak in the beer and dry mustard powder overnight before adding them to the vinegar mixture.  We especially love the texture of the whole grain seeds and the slight crunchy pop they retain. 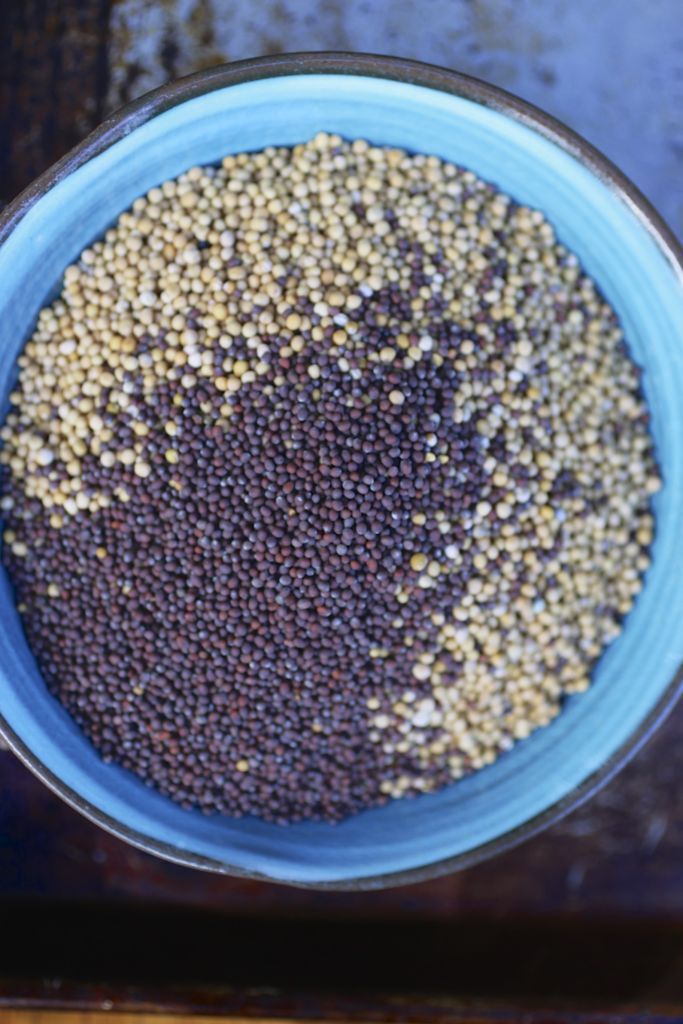 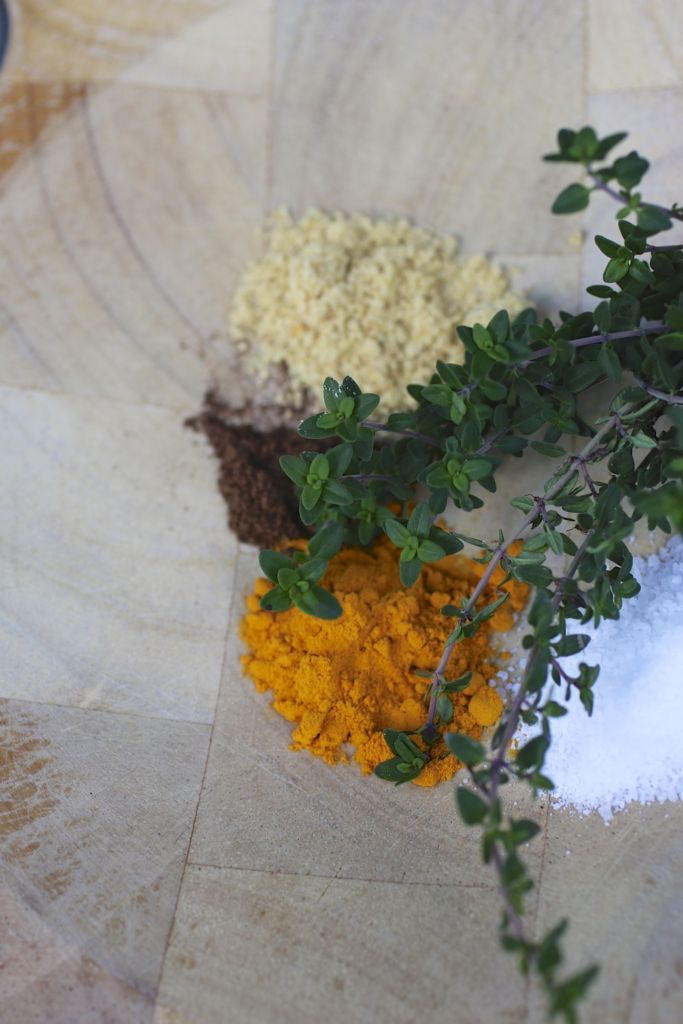 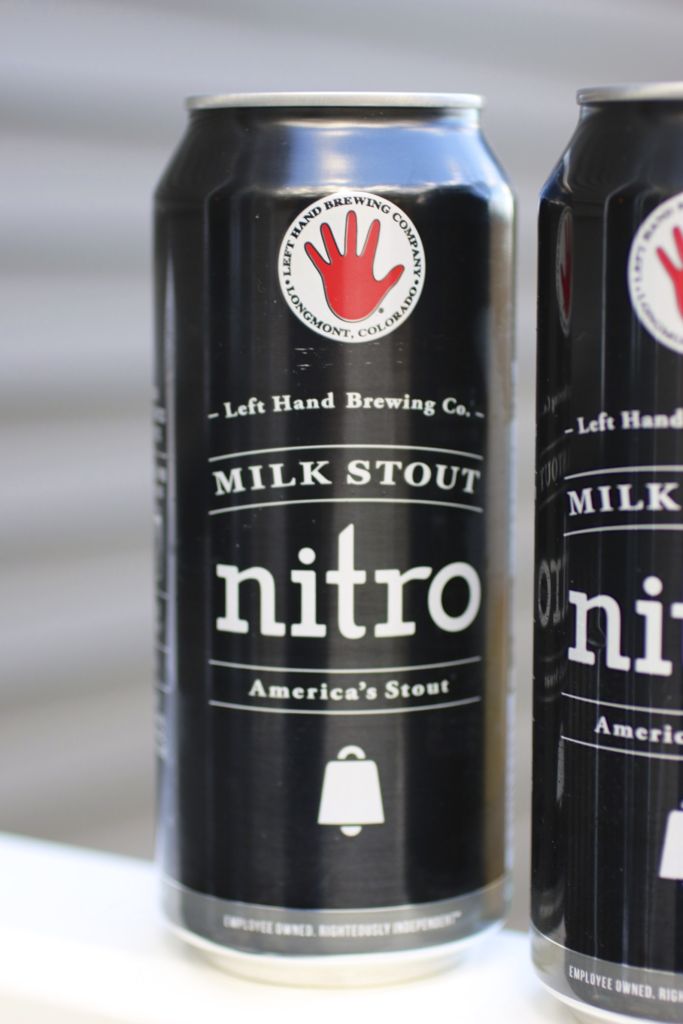 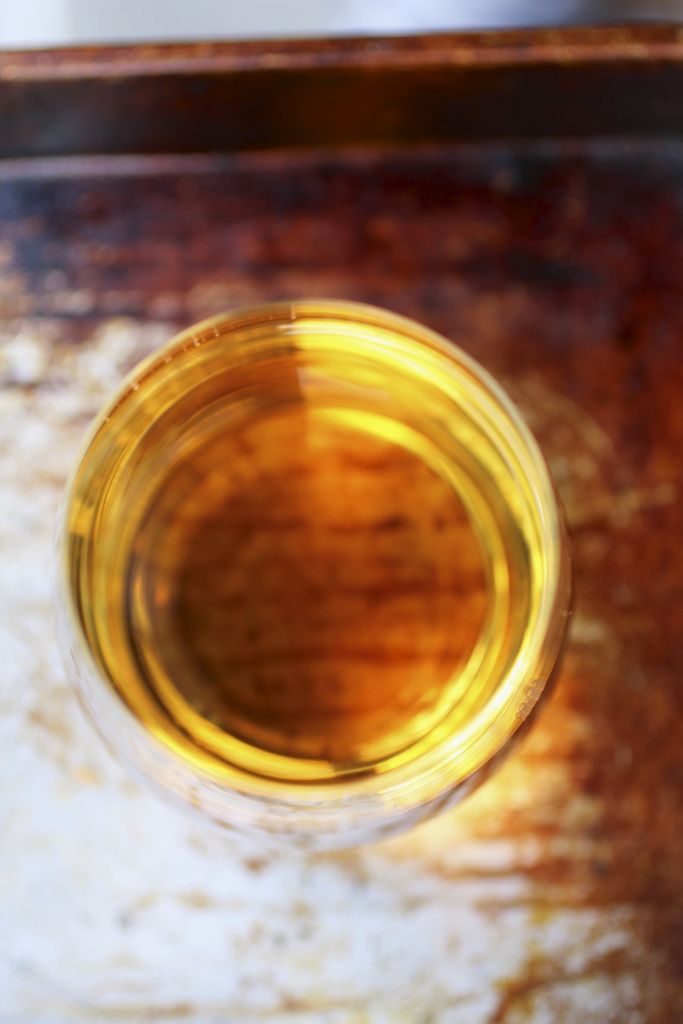 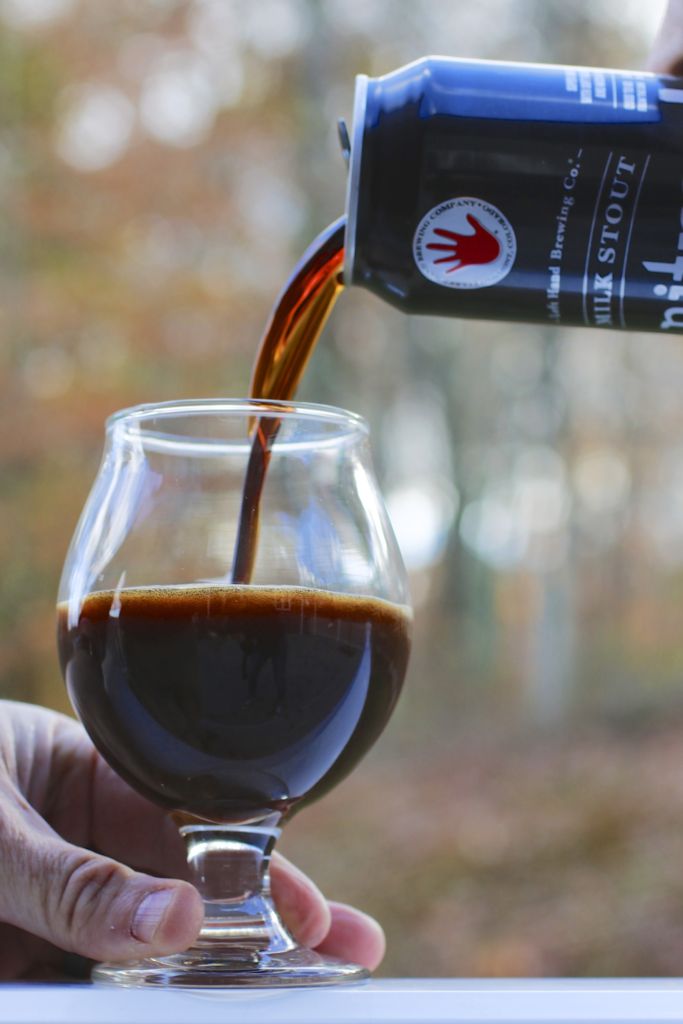 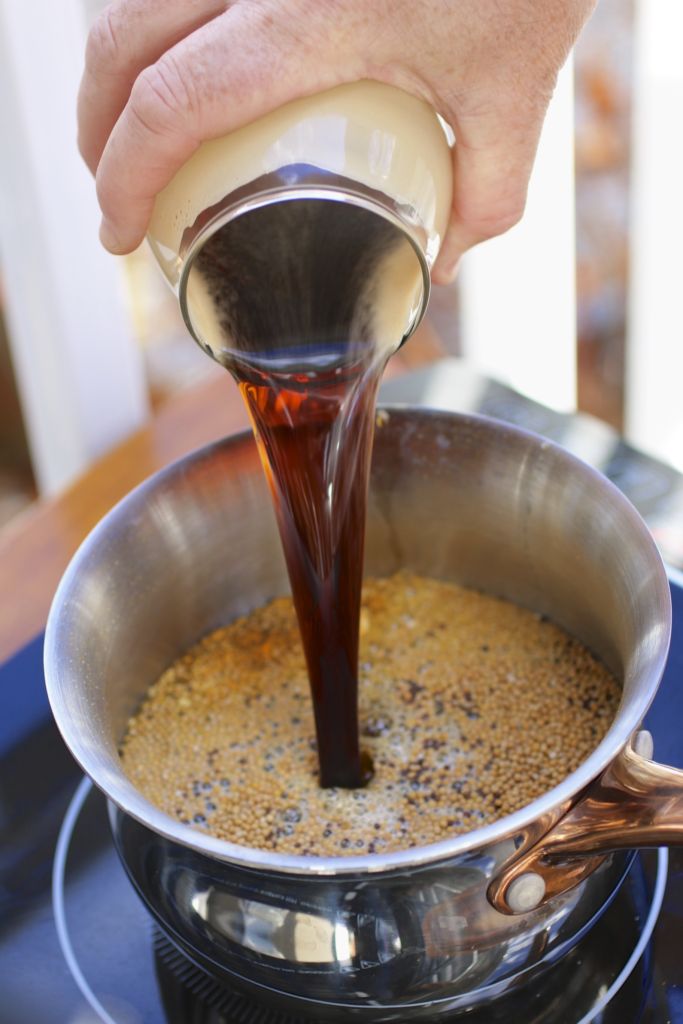 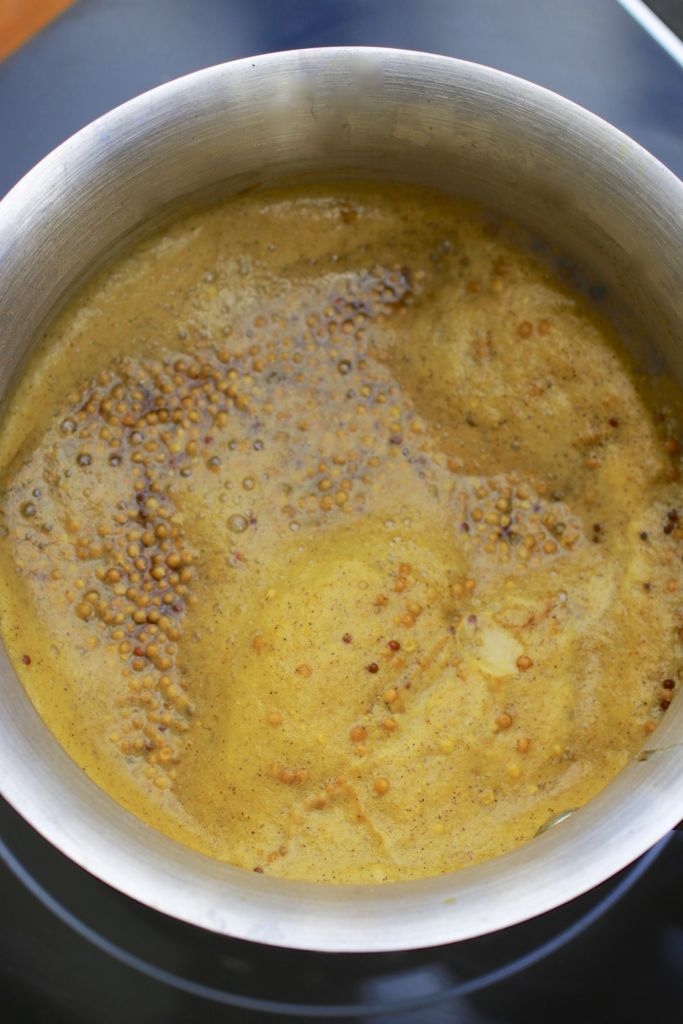 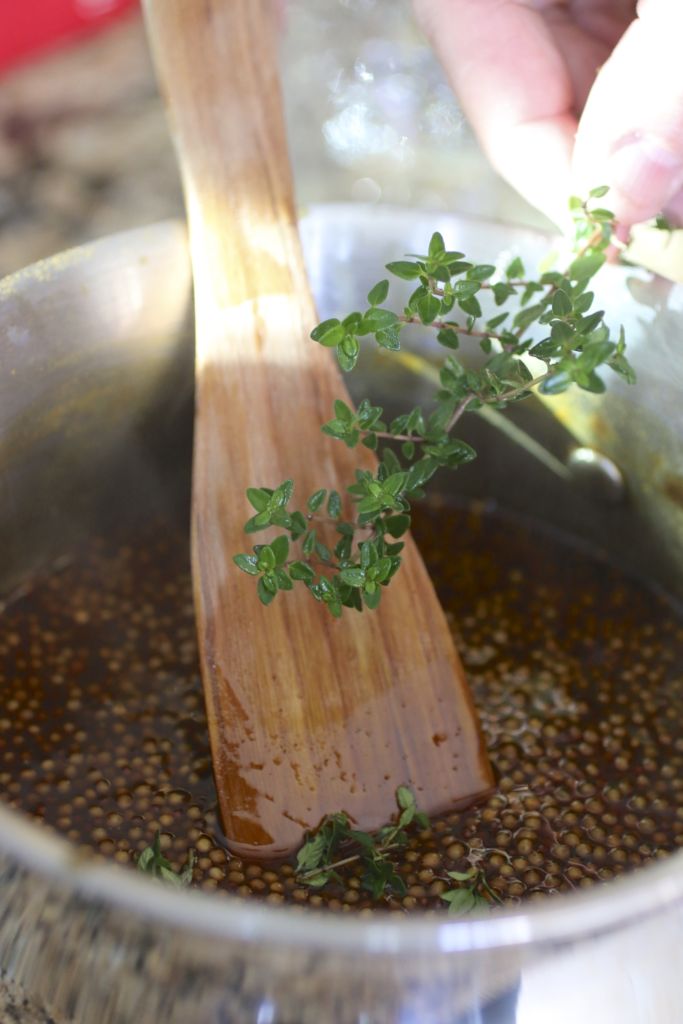 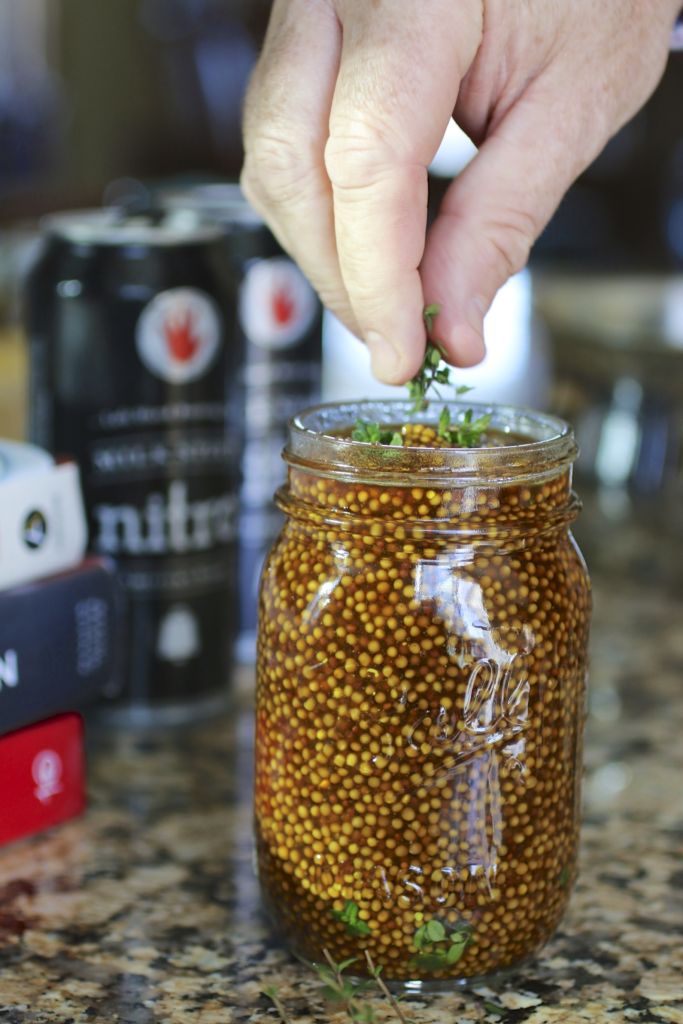 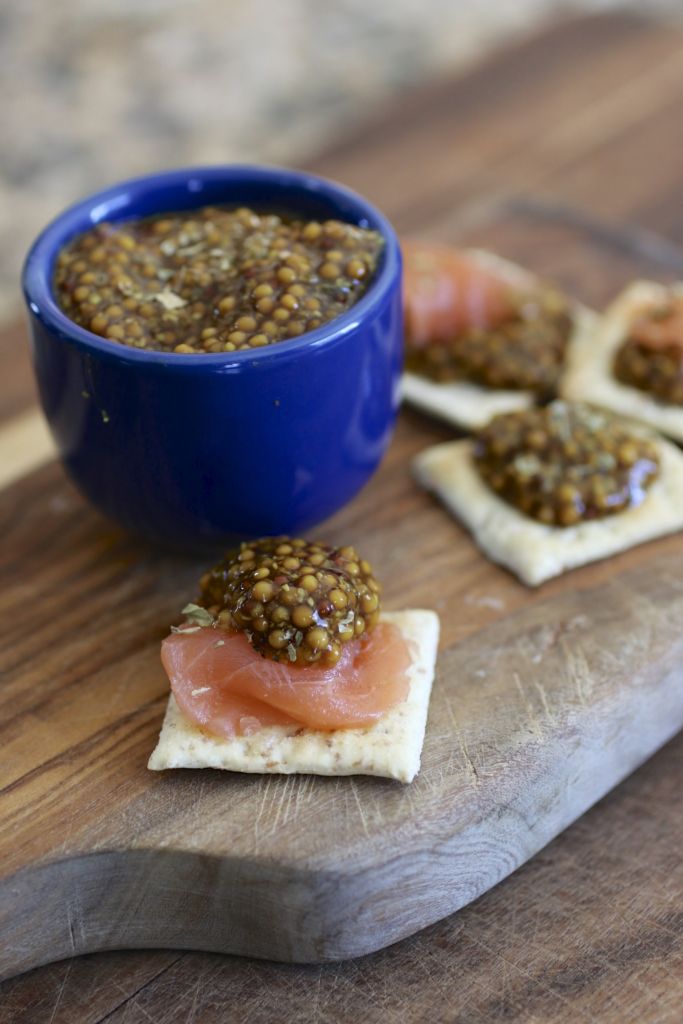