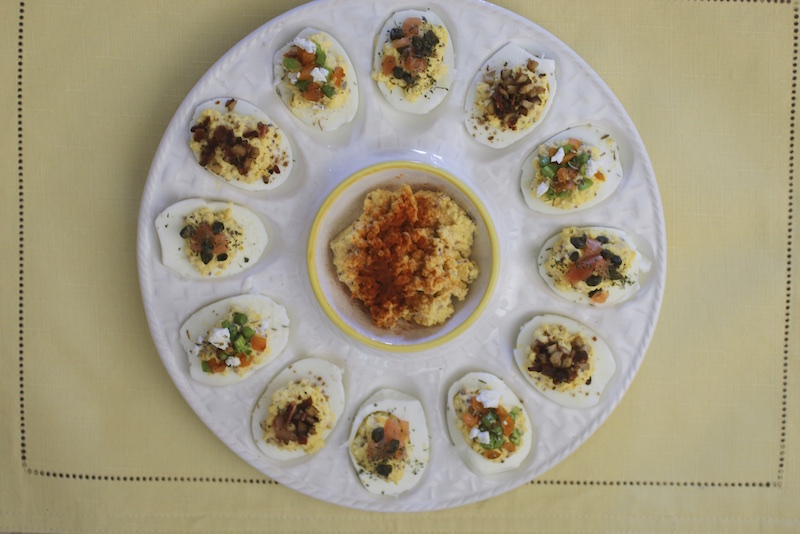 Hard cooked eggs are actually one of the foods my kids love in their lunch boxes so I was a little excited to learn that today is National Deviled Egg day.

Growing up as an 80’s kid (ok and a good part of the 70’s), deviled eggs made their appearance at almost every summer party.  We had a special Tupperware container specifically made to carry them.  Ours were the plain and simple traditional American version- mayo, mustard and paprika.  No surprises- excellent taste and a memory that is embedded into my palate.  Here at our house we did not have a deviled egg plate.  Great tip- you can find these at thrift shops in large numbers! Apparently the majority of people are no longer excited about deviled eggs.  I headed down to my favorite thrift shop and had no trouble finding one. 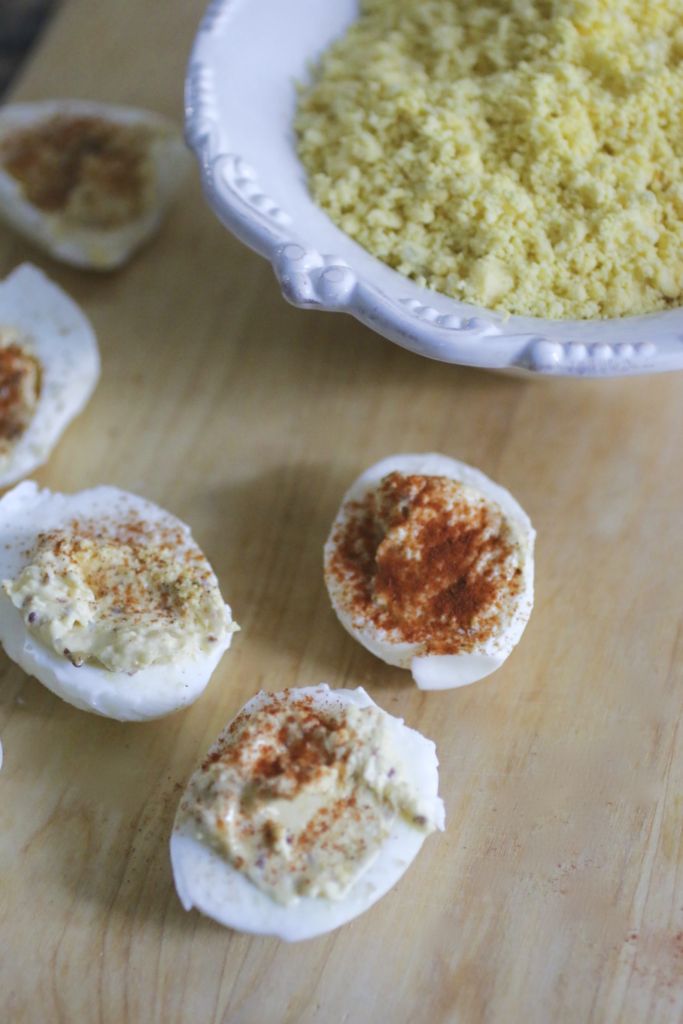 Deviled is actually a British term first showing up in the late seventeen hundreds to describe foods that were hot or spicy.  Originally tracing back to Ancient Rome when eggs were boiled and seasoned with spices, this American classic is not actually American at all.  In fact it did not really appear in American cookbooks until the late eighteen hundreds when the Fanny Farmer cookbook suggested using mayonnaise as a binder.  Medieval cookbooks show the eggs as being stuffed with raisins, cheese and herbs.  While there have since been numerous variations including sriracha, kimchi, wasabi and caviar, the classic mayonnaise, mustard and paprika will always hold a special place in my heart.

My method is one that I discovered years ago and have stuck with with fairly consistent success.  Place the eggs in a pan and cover egg tops with about one inch of water.  Bring to a soft boil and then remove from heat, cover and let stand for seven minutes.  Remove from water and let cool completely before peeling shells, slicing eggs in half the long way and scooping out centers.  Put yolks into a bowl and lightly smash with a fork until crumbly.  I mixed the egg yolk base with mayonnaise and some whole grain mustard.  This base was then spooned carefully back into the hollowed out eggs. I wanted to find some traditional complimentary flavors to update this classic and make the middle a little bit of a surprise. I created three topping combinations for these eggs- smoked salmon with crispy capers, shiitake mushrooms with crispy bacon and roasted butternut squash with blanched asparagus topped with goat cheese.  The topping combinations are really endless- I can’t wait to try out a few more I have in mind.

Here is the best part- this became an after school snack for my kids- an actual savory snack that they didn’t walk away from.  I didn’t use a lot of mayonnaise so it was even somewhat healthy- and no, they did not eat all twelve! But yes! A non-sweet snack that was not popcorn.  A snack that would give them a little bit of energy for their afternoon of activities.  A win here at our house. 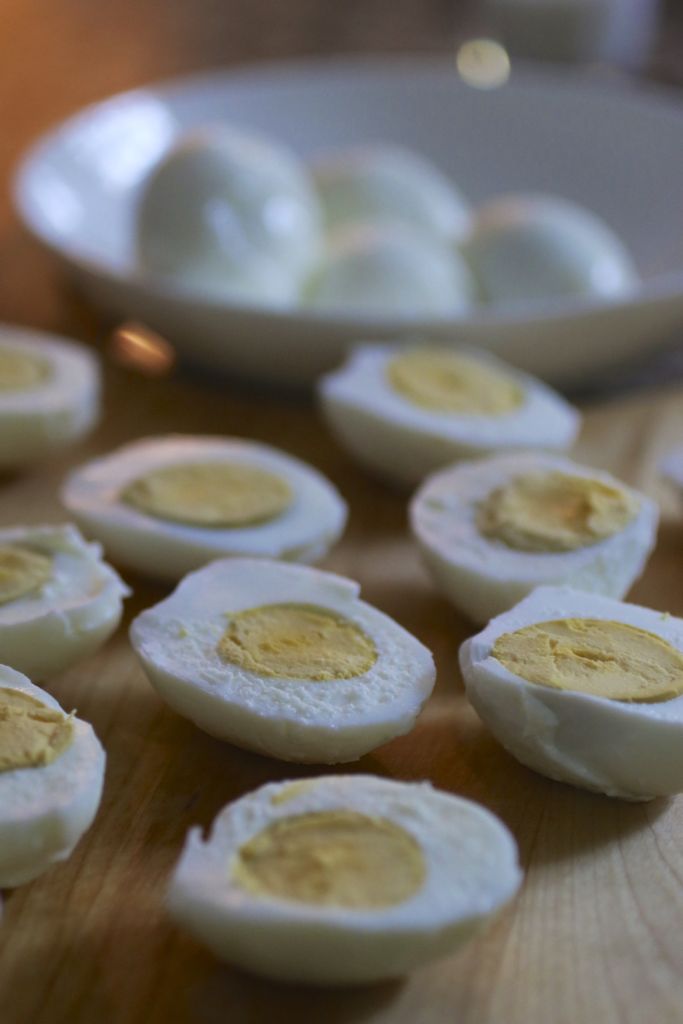 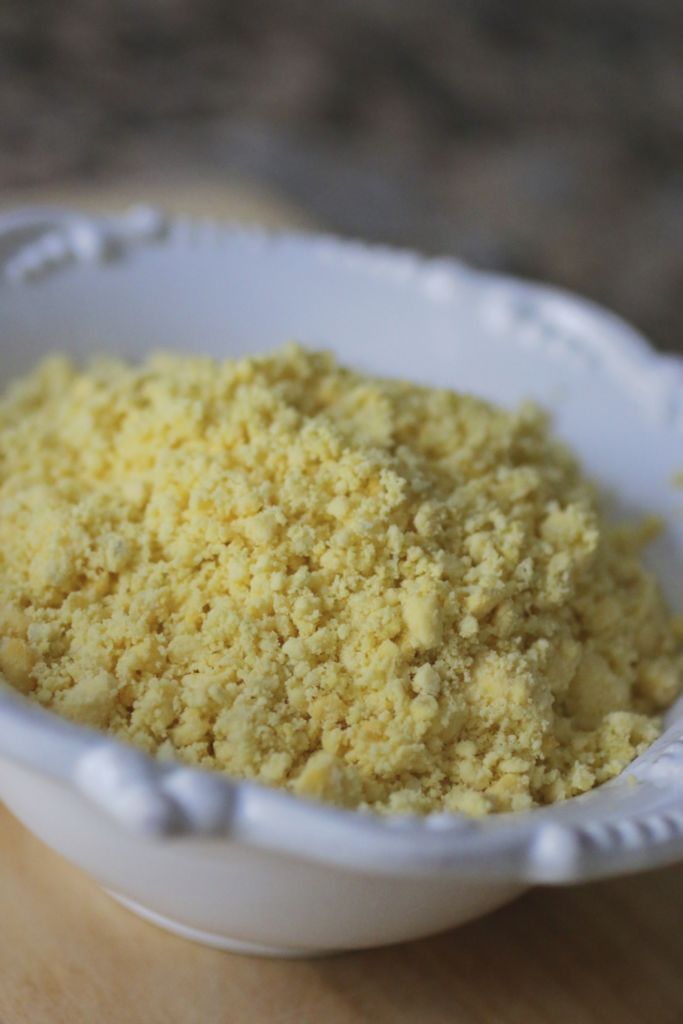 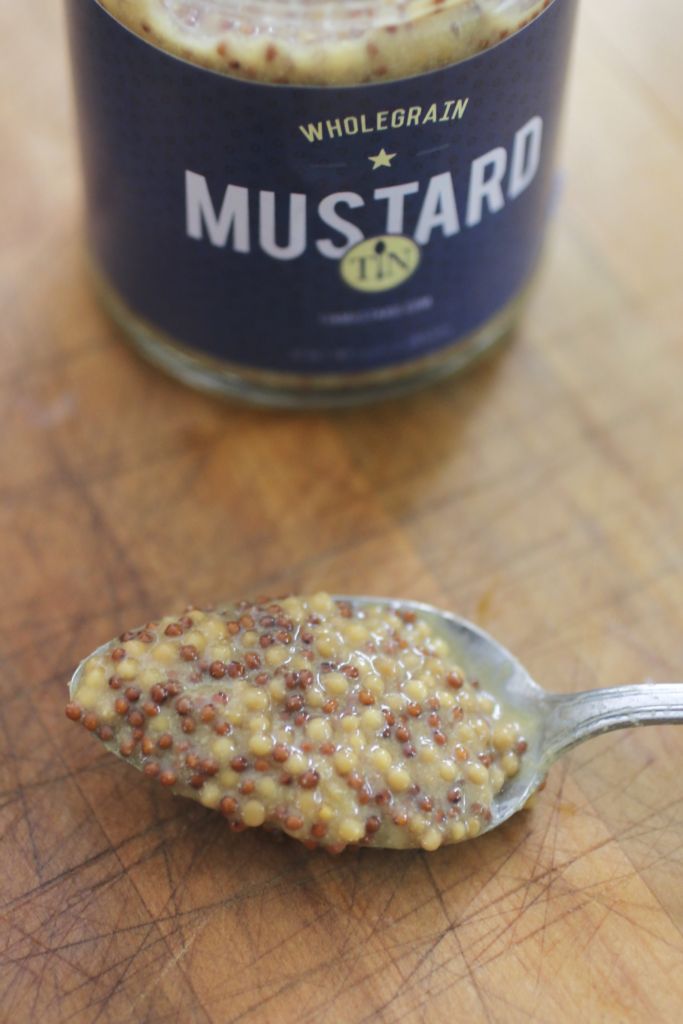 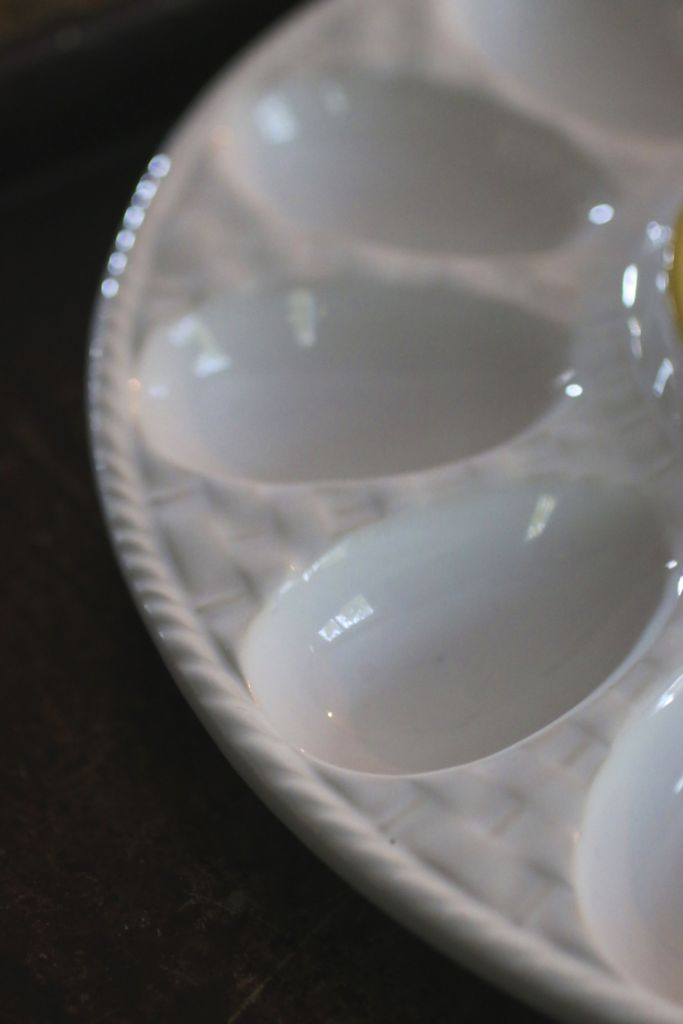 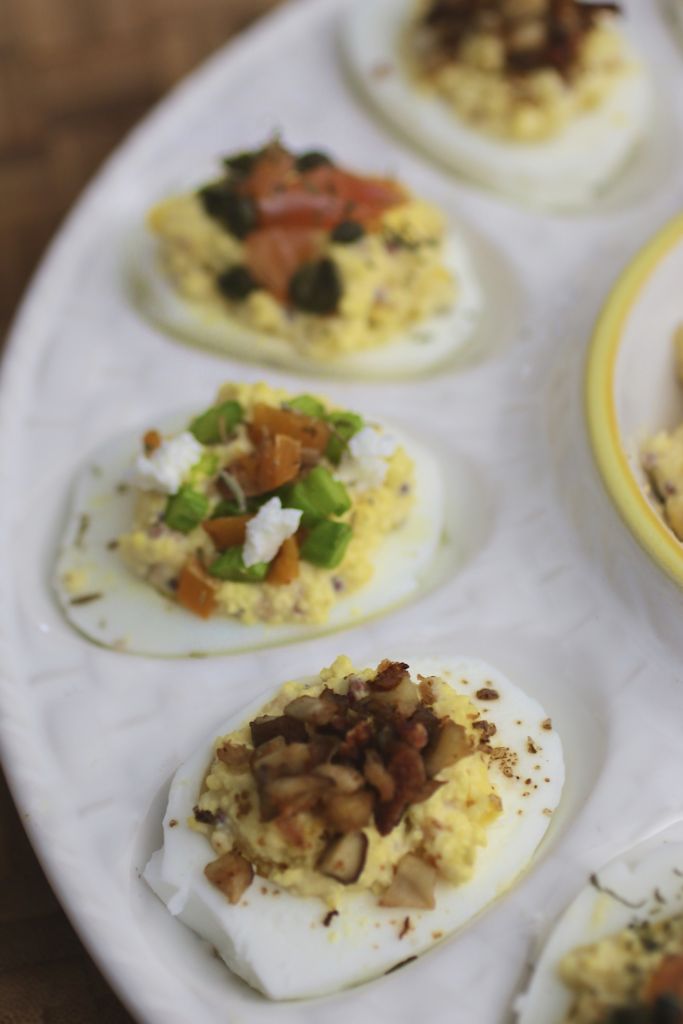 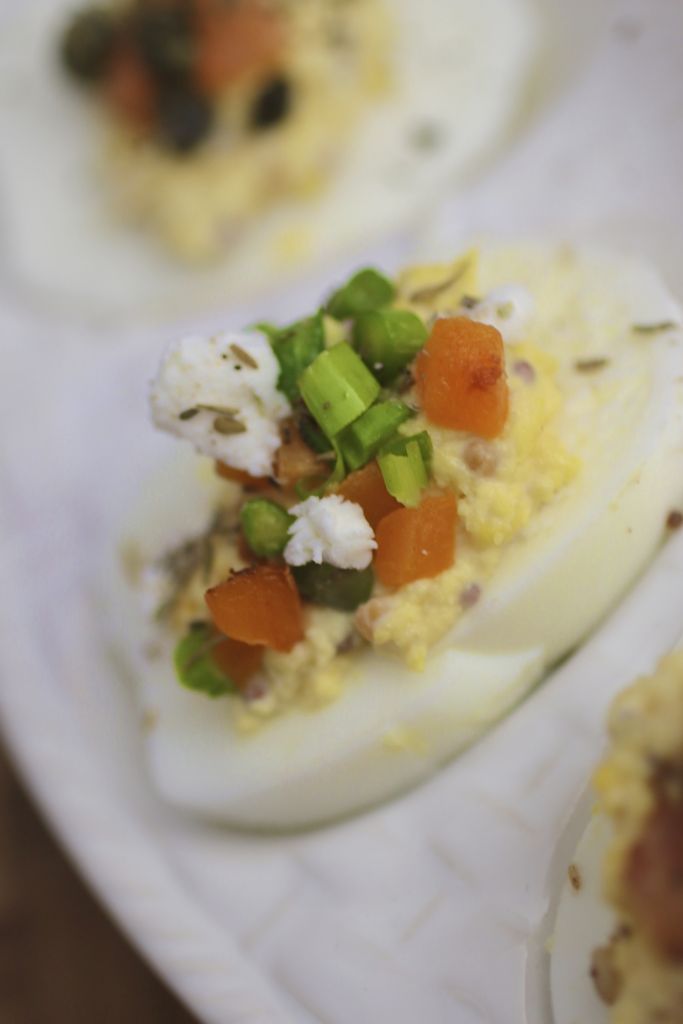 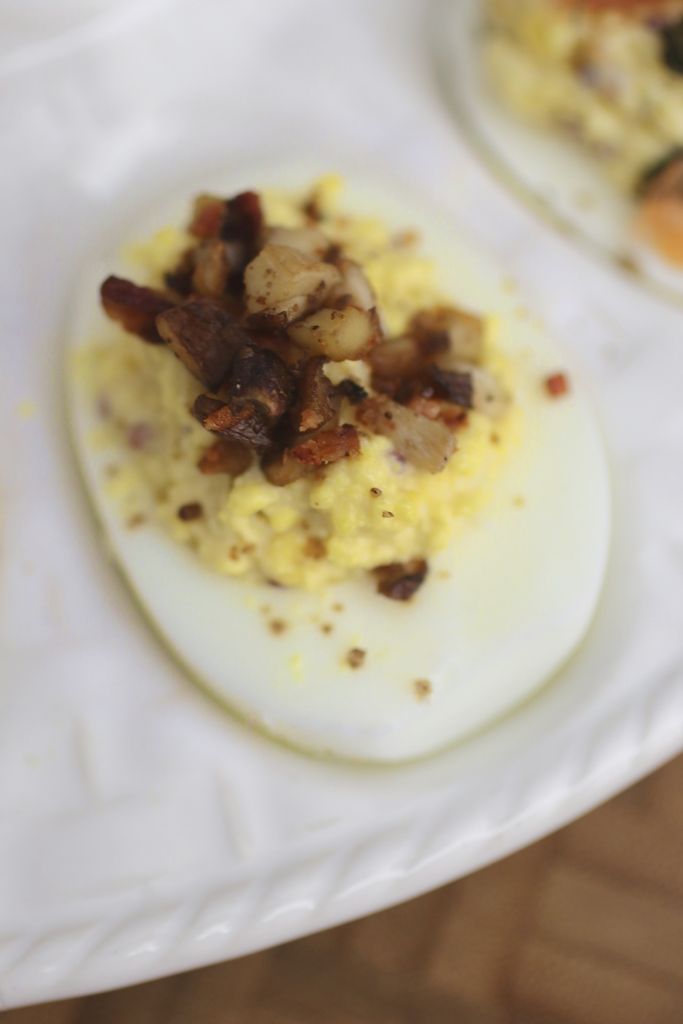 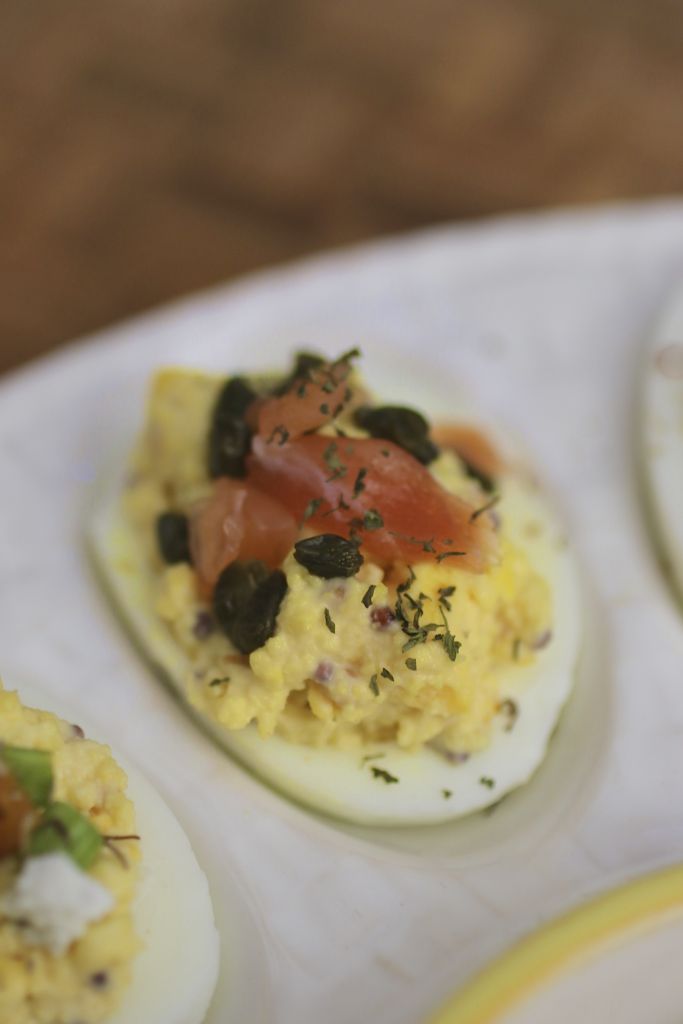 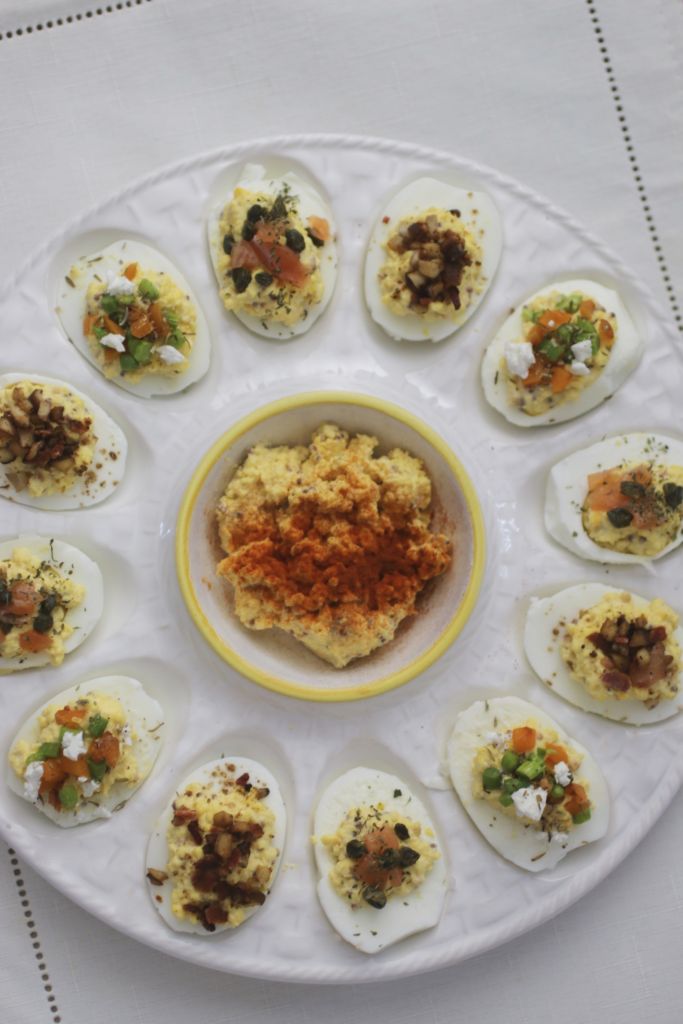