We have a lot of cookbooks.  Some are from well known chefs and others are little books we take chances on when we see them at estate sales or library book sales (our favorites). At this new house we’ve opted not to have cable television which is a HUGE adjustment for one of us…(me).  I am a reality tv junkie.  A cooking show junkie.  A RHONY junkie.  Thank God for Apple TV, eh? Well… it has meant that we have a lot more time for reading.   This morning I picked up one of those little treasures called Goat Cheese/ Delectable Recipes for All Occasions written by Georgeanne and Ethel Brennan with charming illustrations by Philippe Weisbecker.  I love goat cheese.  From day one back in the 80’s when we had no idea what it was and needed it for a recipe for Montrachet Wontons, my mother and I had to hunt it down in our very small world hometown where Land-O-Lakes American ruled the cheese selection.  Asking for Montrachet was like speaking a different language.  But once we found it…there was no going back.

This adorable little book has a recipe for homemade plum preserves which sounded just up my alley today.  It is chilly again and on days like this something comfort like and old fashioned is the perfect thing to indulge in once the kids have been dropped off at school.  Within thirty five minutes you can have homemade preserves.  As it was just myself I really adjusted the original recipe and ultimately just used the concept.  I took two plums and peeled and chopped them placing them into a small saucepan with about two tablespoons of sugar and a splash of water.  To this I added the zest of one lime.  The mixture was boiled and then the heat was reduced, the pan was covered and it was cooked down for about thirty minutes.  Throughout this time the liquid bubbled and the fruit became syrupy and caramelized.  After thirty minutes it was removed from the heat and brought to room temperature.  While it was cooling I mixed two heaping spoonfuls of sour cream with goat cheese from Vermont Creamery and stirred it until it was smooth.

The cheese mixture was spooned onto a plate and the yummy, thick preserves were drizzled on the top.  They had that caramelized fruity flavor which will, no doubt, only get better as the day goes on.  The sweet fruit against the tangy cheese was perfect.  It is, technically, billed as a dessert in the Brennan’s book.  But if you have a sweet tooth it will do just fine as breakfast. 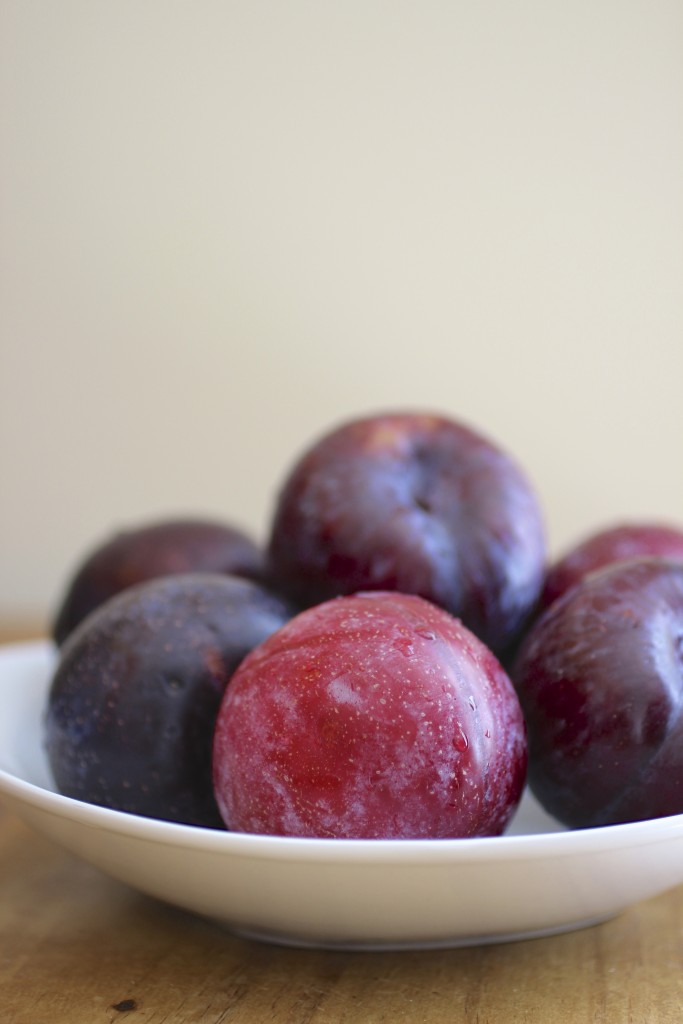 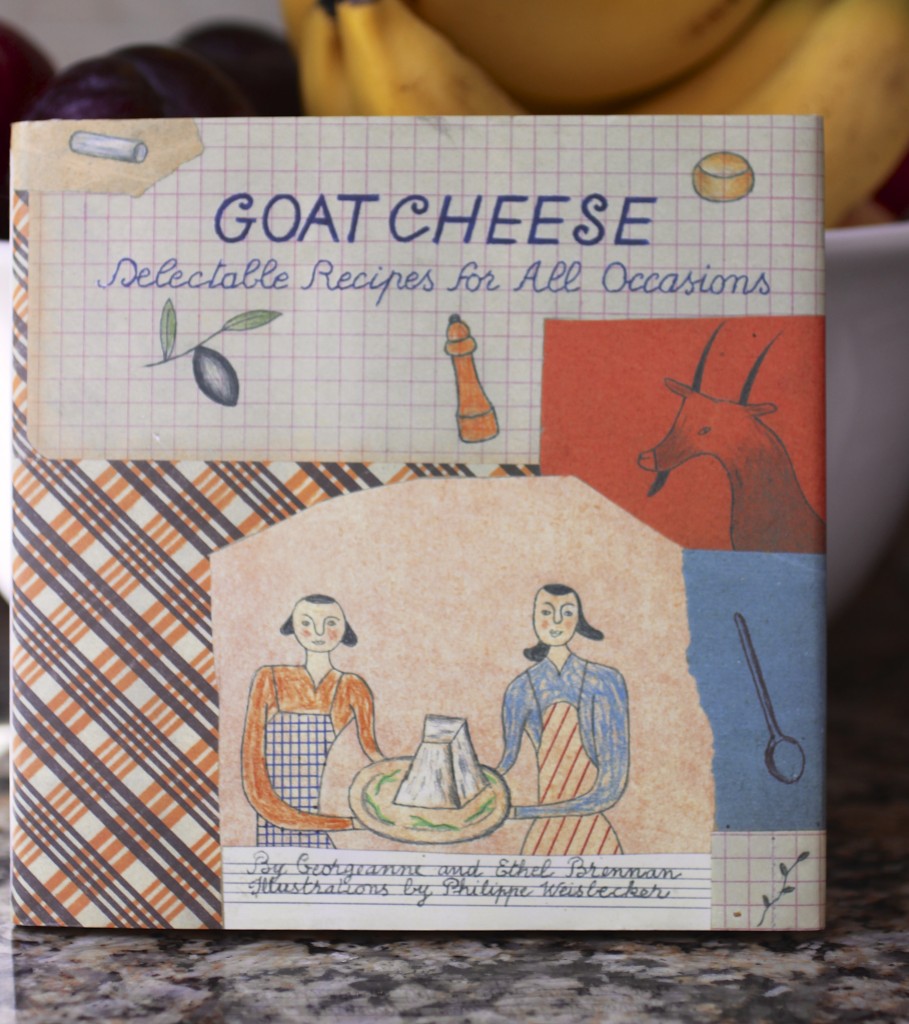 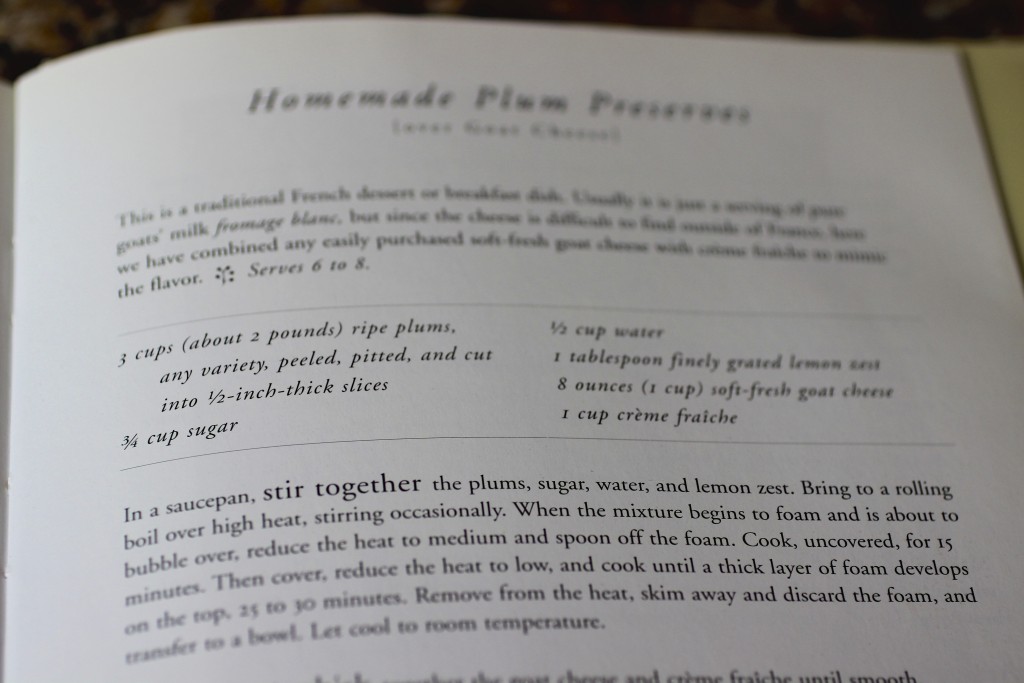 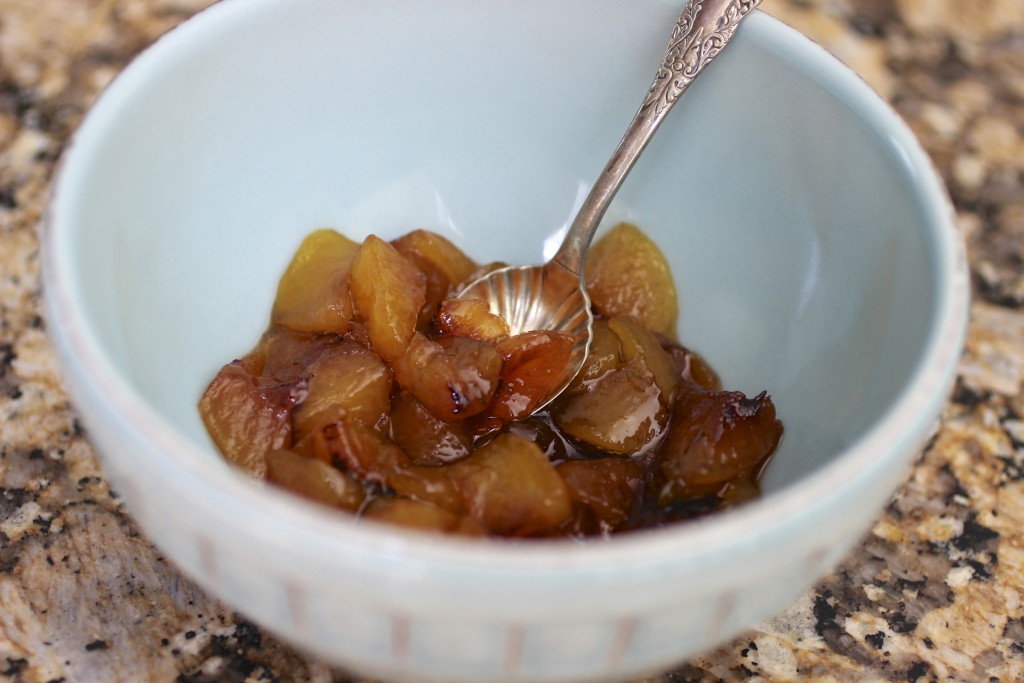 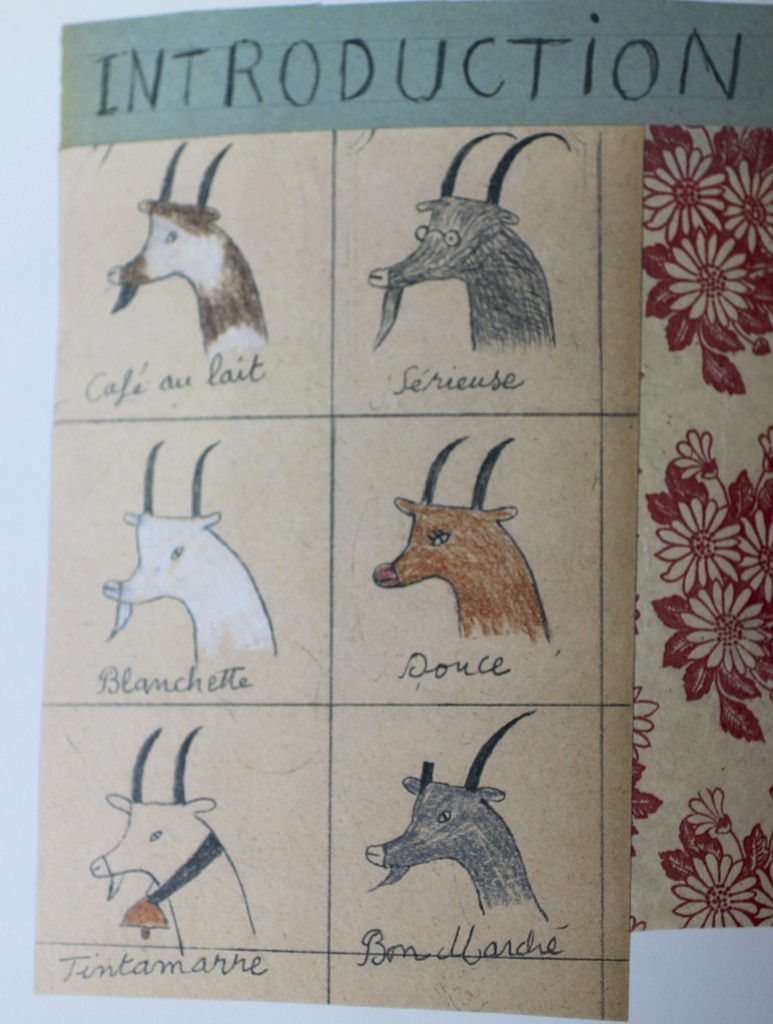 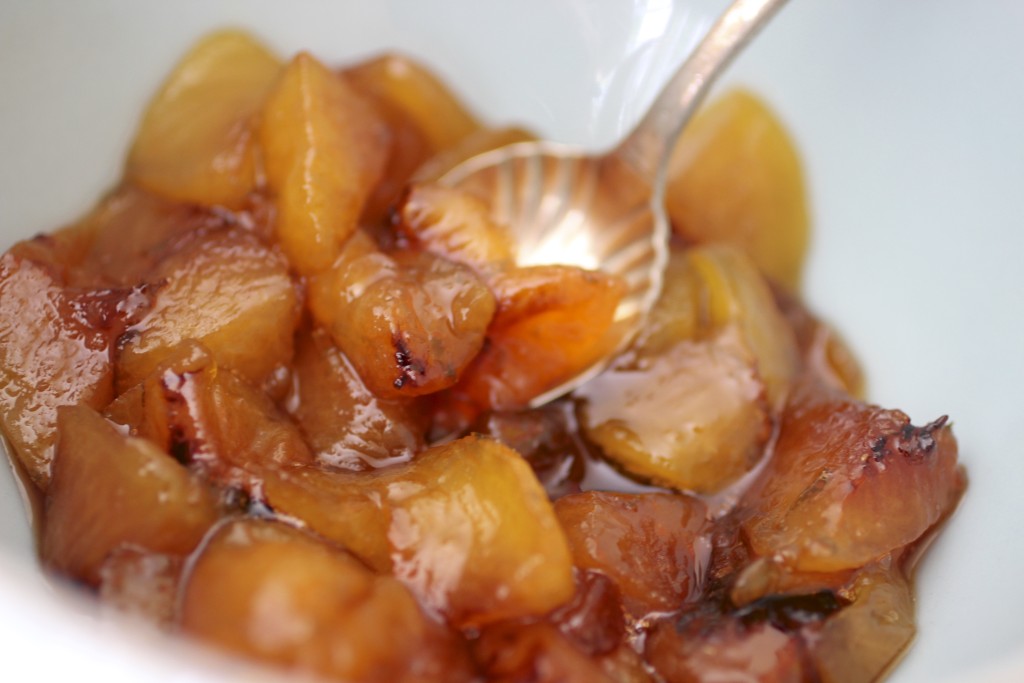 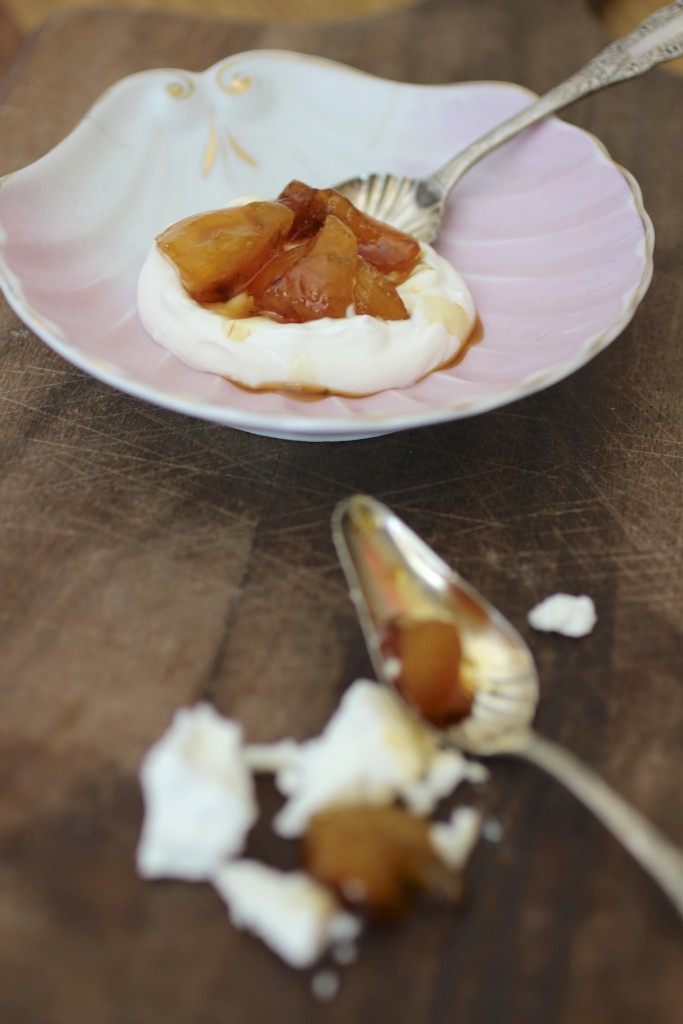 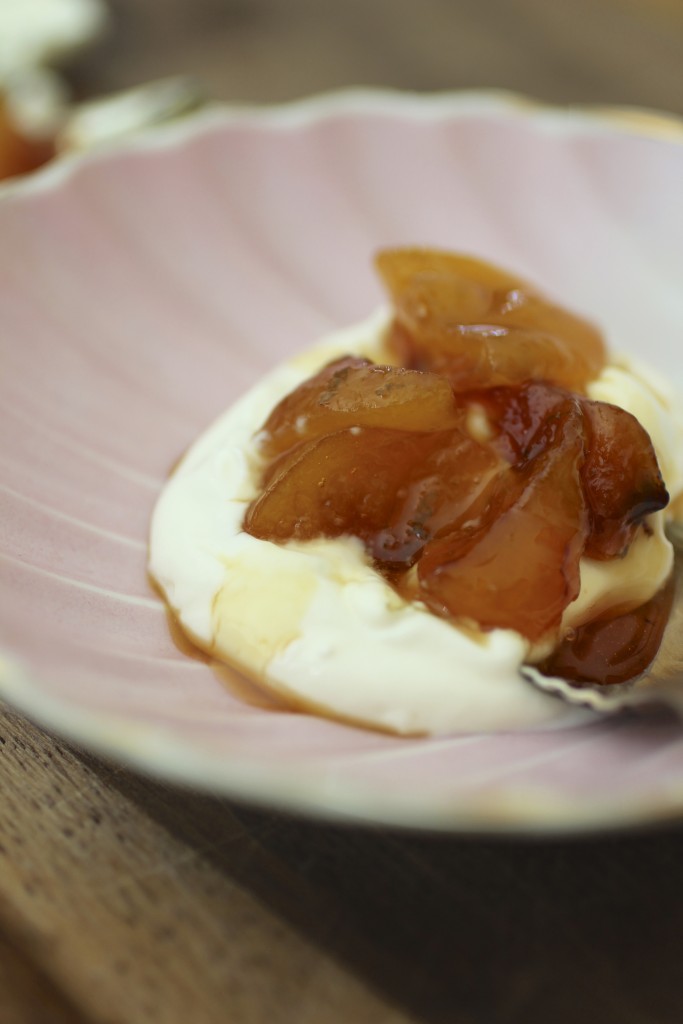