The weather in New England has been very unpredictable lately- going from muggy summer like humidity to crisp autumn days all in the course of a week.  We have been holding off on cooking with pumpkins because it just has not felt terribly fall like for more than a day or two in a row.  This weekend was the turning point.  Gusty winds, rain and cool temperatures put us in the mood to get our pumpkins and get cooking.

One of our favorite fall treats is pumpkin cheesecake.  We generally make a giant one and always have some left over to freeze for a later date.  This time we opted for one tiny version that was more than enough for our family of four.  Cheesecake is so rich that really, unless it is plain New York Style, I only tend to want a bite or two before I know my pudding compartment is full.  Pre-heat your oven to 350 f. For this adorable little cake we started by making a generic cheesecake crust using graham cracker crumbs and melted butter.  They were mixed together and then pressed into our two tiny springform pans.  The cheesecake base is quite simple to make.  We took two bricks of room temperature cream cheese and mixed them with three quarters of a cup of sugar until the mixture was smooth.  We added two eggs (one at a time) and beat just until combined.  We separated this mixture in half and then, using a wooden spoon, mixed in half a container of pumpkin puree to one of the cheesecake bases.

You will find that the base with the pumpkin puree is much runnier.  We placed the non-pumpkin base in the bottom of the cheesecake pan and then added a layer of dark chocolate mini chips.  The pumpkin layer was then added to the top and the cakes were baked for approximately 50 minutes.  The trick with cheesecake is being patient.  Cheesecake will crack if over beaten or over cooked.  We cooked ours the full 50 minutes and left them in the oven, which we turned off, for an additional hour.  They were removed and left to set in the fridge over night.

We managed to save all the pumpkin seeds the kids dug out of their pumpkins this year.  I had seen a great recipe from one of our favorite food bloggers, Boulder Locavore, for roasted pumpkin seeds.  This recipe turned out perfect.  We only seasoned ours with sea salt because we knew we wanted to use them as a garnish for our cheesecake.

When the cakes were fully cooled we stacked them and garnished with mini chips and pumpkin seeds.  The creamy texture of the cake with the salty crunch of the seed was a nice change from our usual pumpkin only cake.  The pumpkin flavor was subtle.  The layer of chocolate was so good.  This cake is super rich so be forewarned.  For our family the mini version was just perfect. 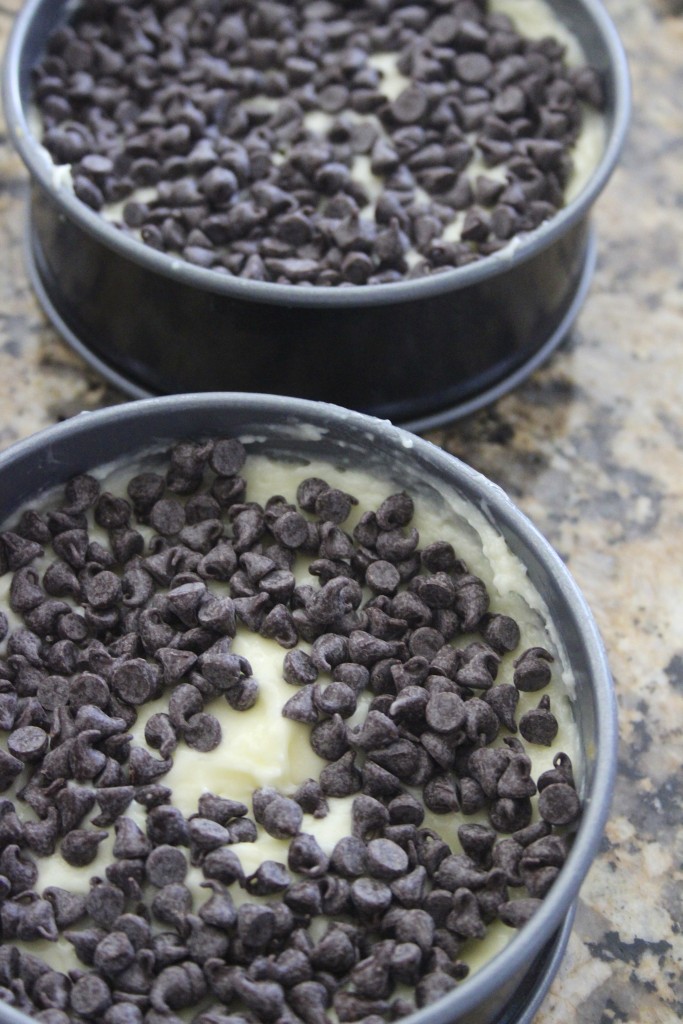 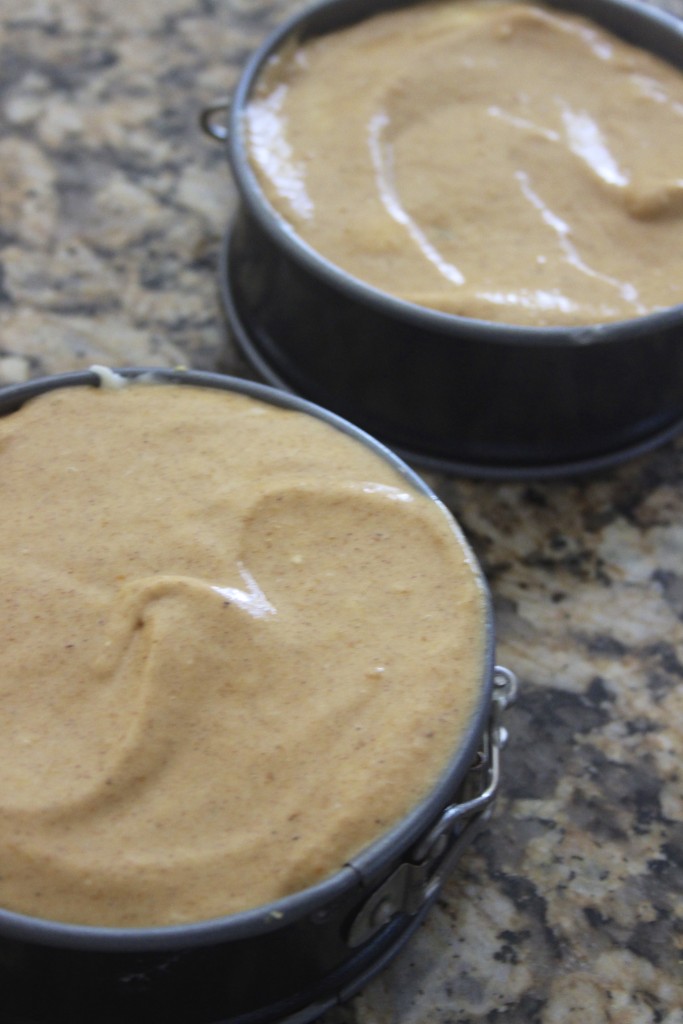 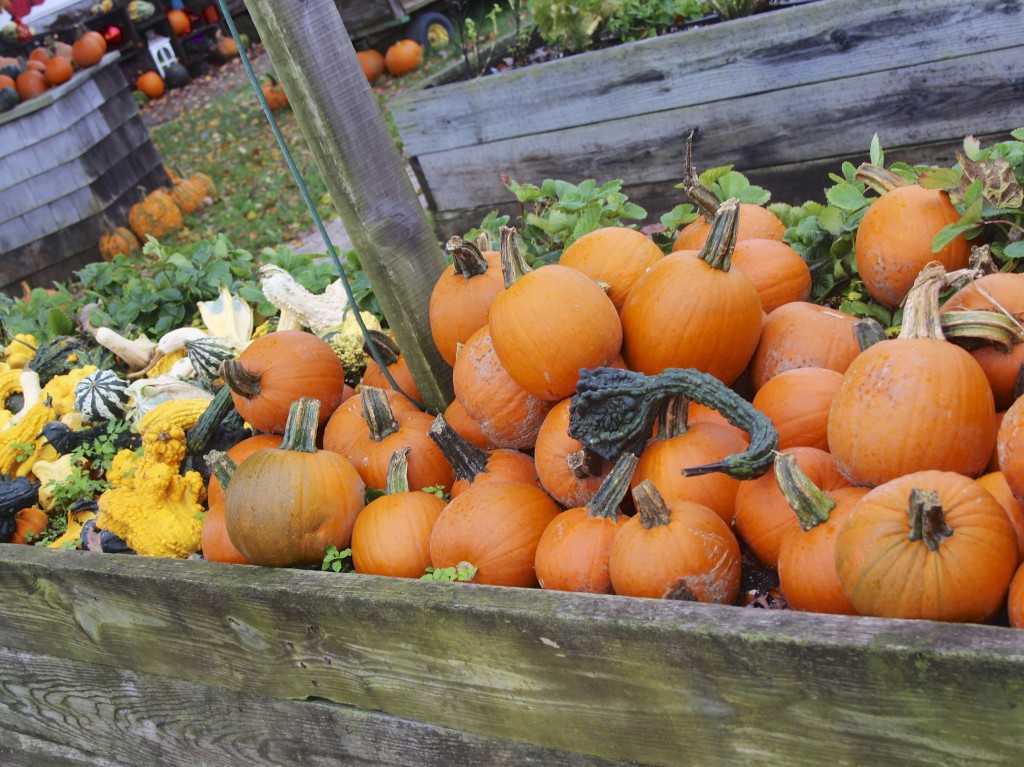 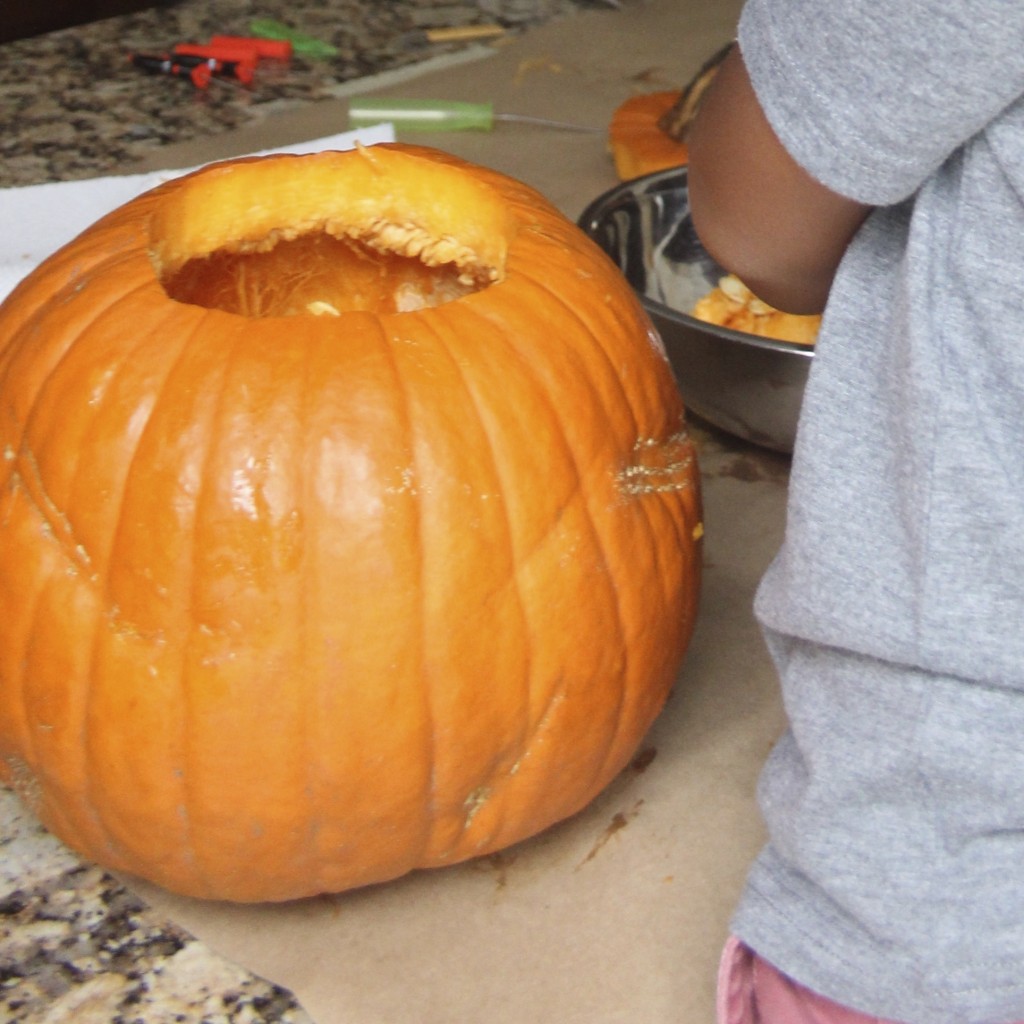 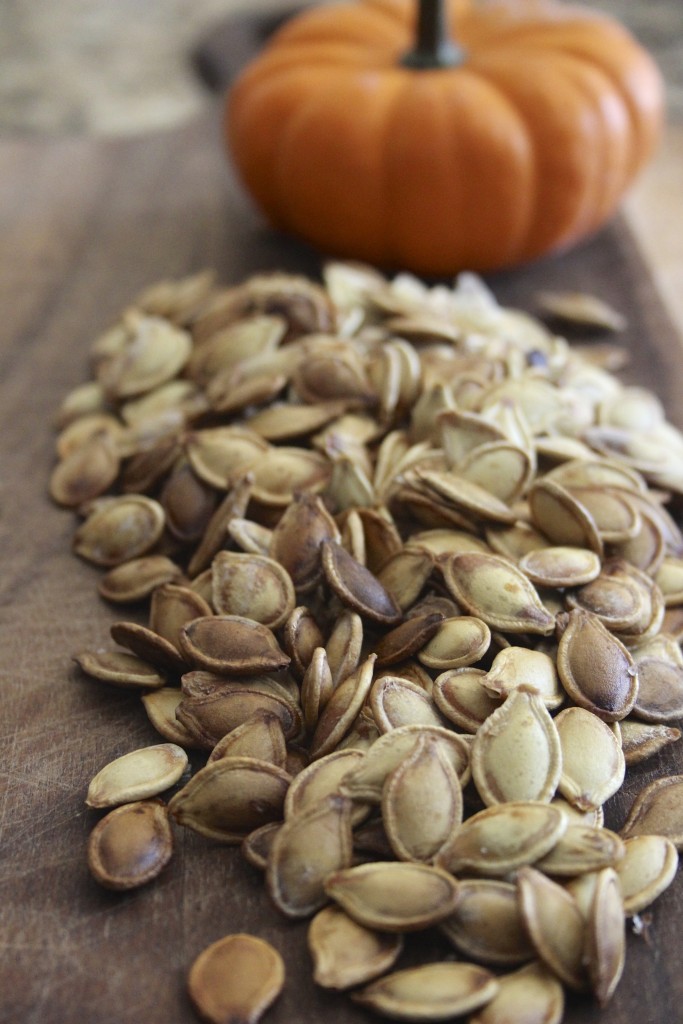 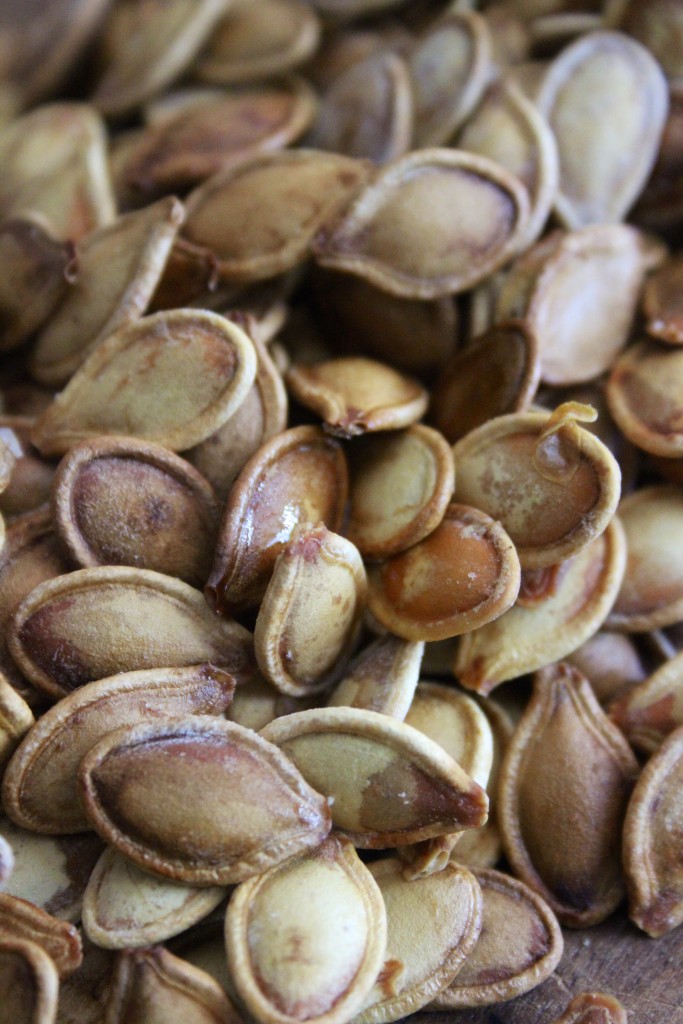 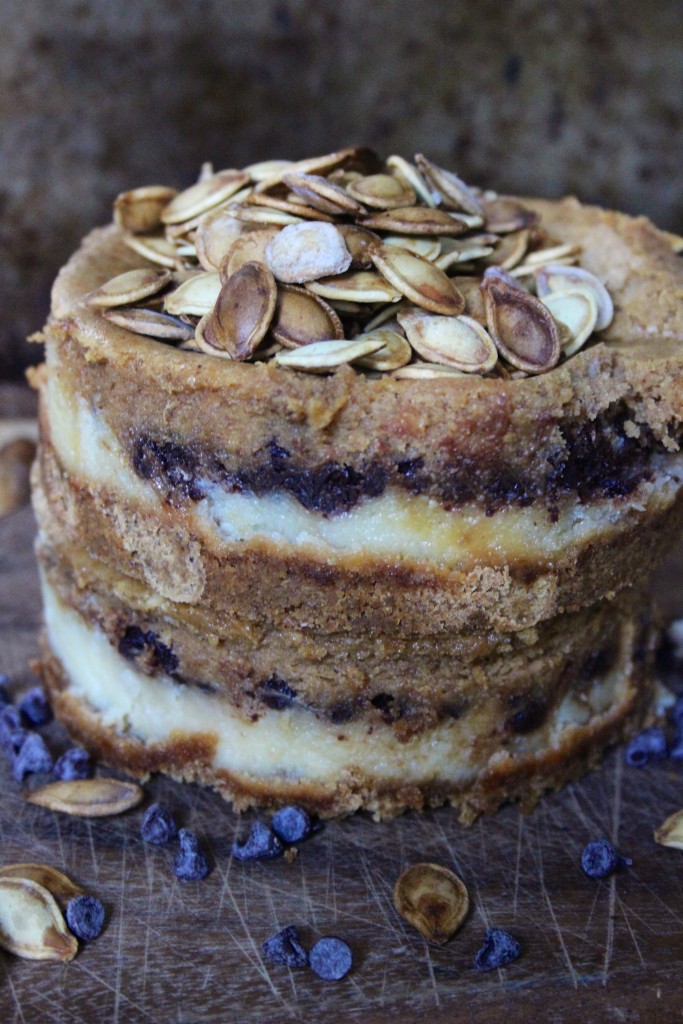 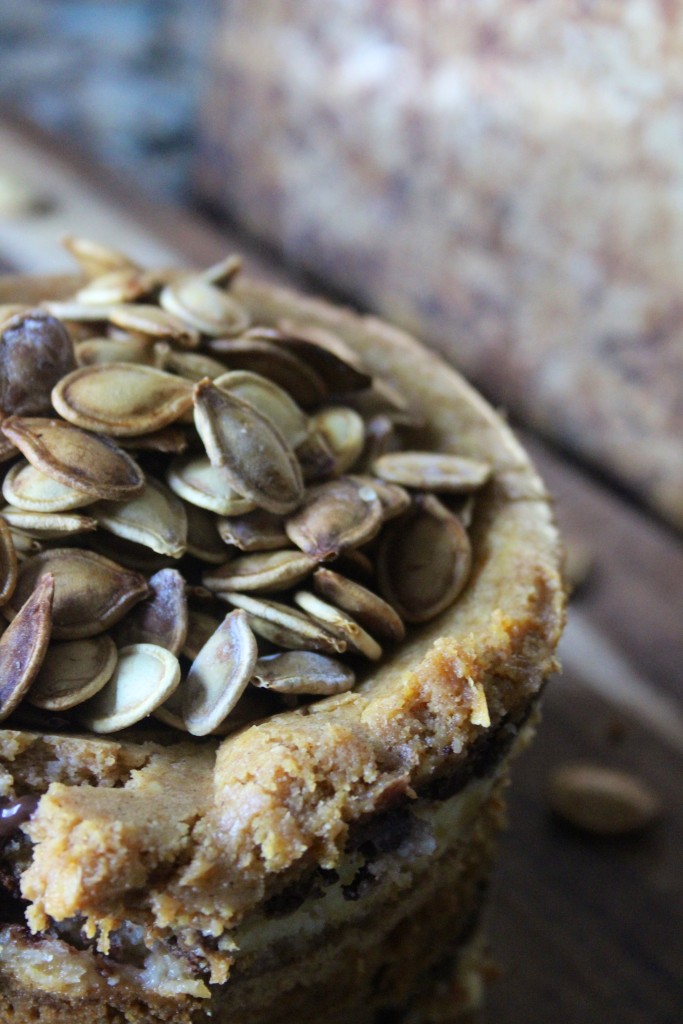 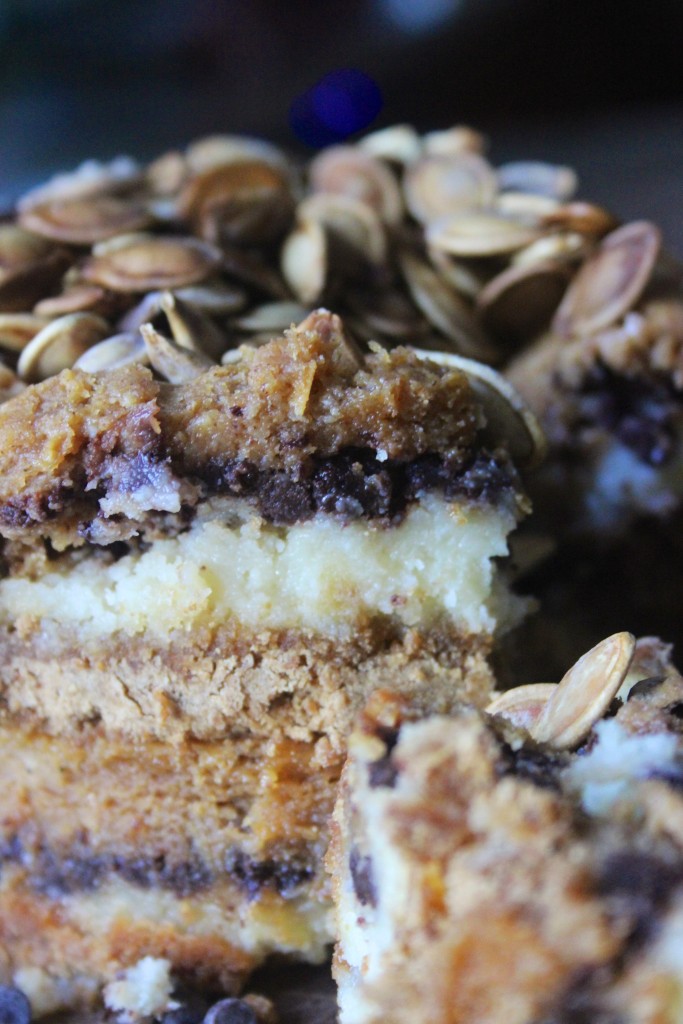 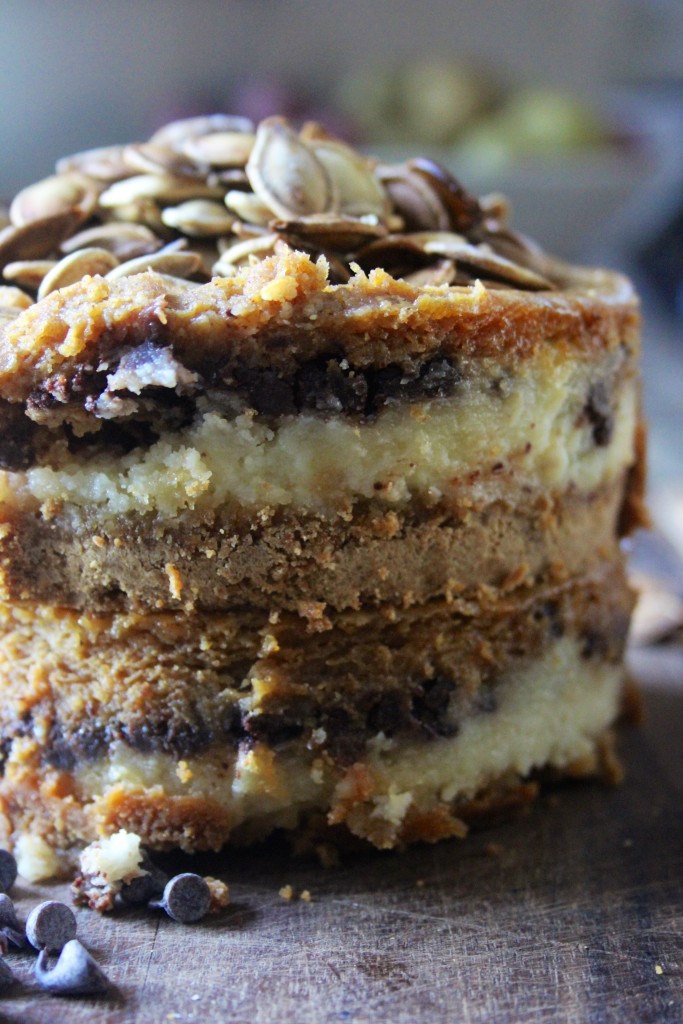