I’m always a bit suspicious about a so called “dessert” that only has a half a cup of sugar…but that is probably because I grew up on Hostess treats and any other sweet thing I could get my little hands on.  This fruit pudding recipe is meant to be a tart, light treat after a heavy holiday meal.  It does cleanse the palate.  But sweet…it is not. 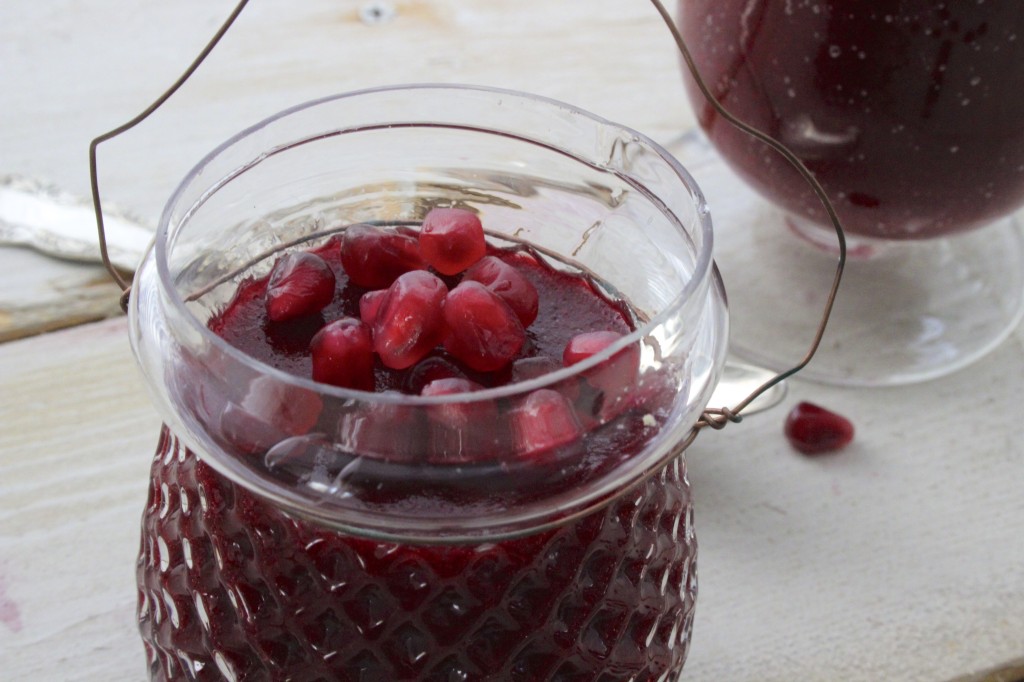 As mentioned countless times, we (I) have a slight addiction with food magazines.  Particularly… saving the magazines.  I’ve gotten much better, really I have.  I have been going through them and tearing out interesting recipes so that I can recycle the rest of the magazine and then neatly organize the pages I want to keep.  Except for Martha.  I can’t bring myself to tear her pages out.  So two decades worth of Living magazines will sit neatly on my shelves for future reference.  This recipe is from the 2008 December issue of Gourmet…which has since been recycled! The original photo was so stunning it stopped me in my tearing pages out tracks and said keep me, make me, try me.

2 cups wild ligonberry sauce (or lingonberries from two 14 oz. jars)…ok let’s just stop there- I don’t know about you but I have not heard of a lingonberry.  I searched high and low.  In our little world called Western Massachusetts there was not a lingonberry to be found.  Maybe you should try Ikea.  They sound Swedish to me.  I opted to use a cranberry/blueberry mix although in retrospect you might be able to use cranberry sauce (the jellied sort).

To begin with, puree the thawed raspberries (with their juices) in your food processor.  Force the mixture through a sieve into a separate bowl so that you leave the raspberry seeds behind to be discarded. 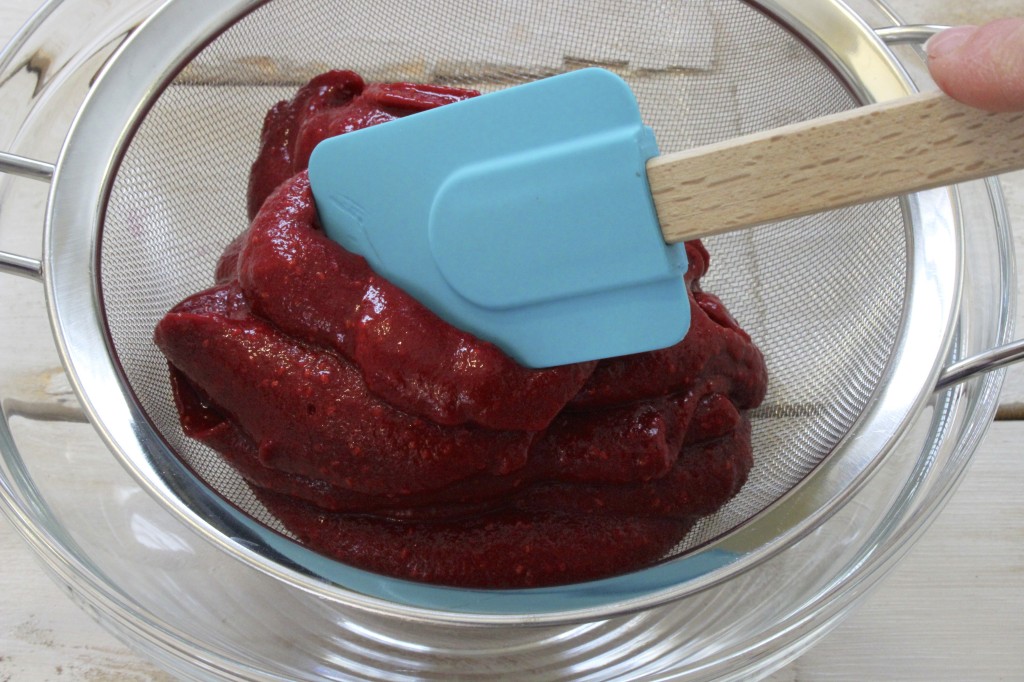 Wow- there were so many raspberry seeds in this mix I had no idea.  And forcing this through the sieve was a little more work than I thought it would be.  The result was amazing- beautiful puree. 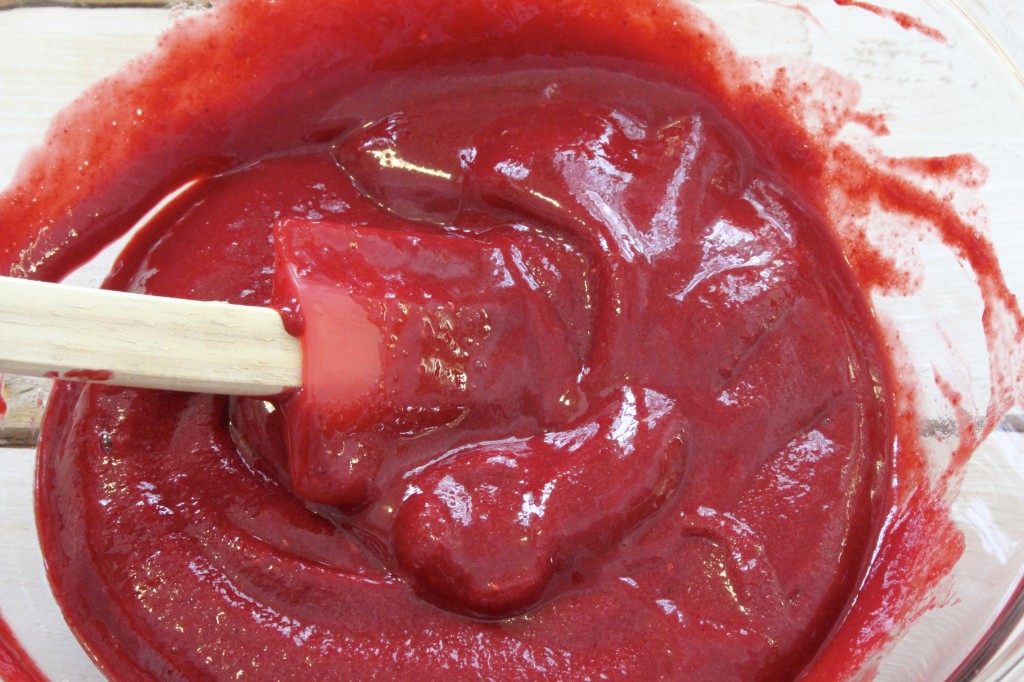 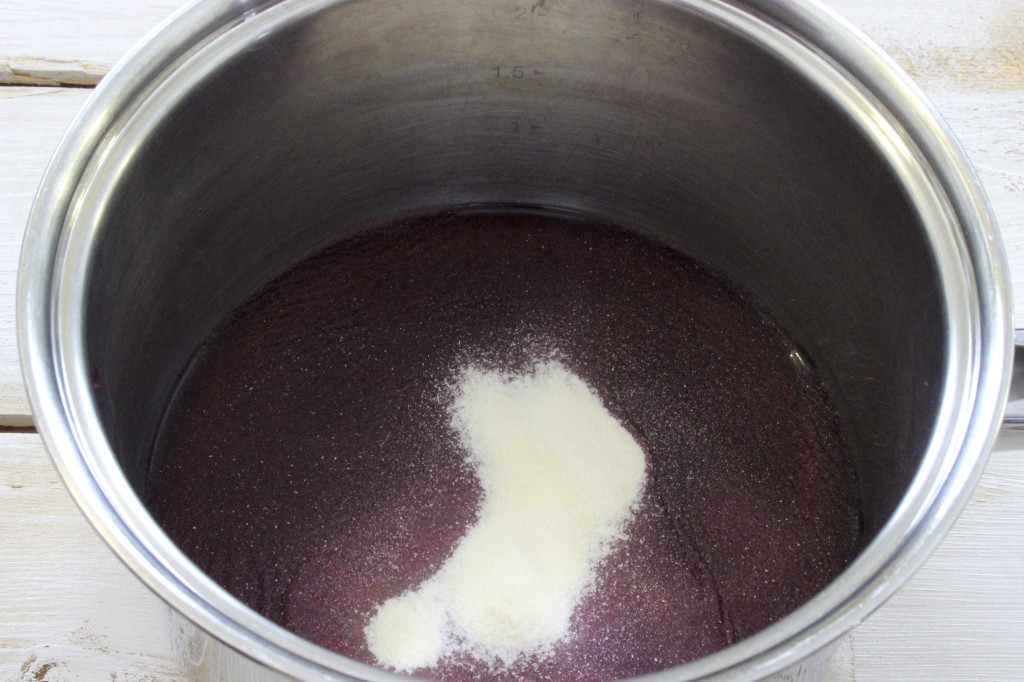 The recipe calls for the lingonberry sauce and sugar to be added to the sugar/pomegranate juice mixture and cooked down until it is all dissolved.  As I said, we did not have lingonberry sauce so I took a frozen cranberry-blueberry mix and pureed it in the food processor and then again forced it through a sieve as a substitution. 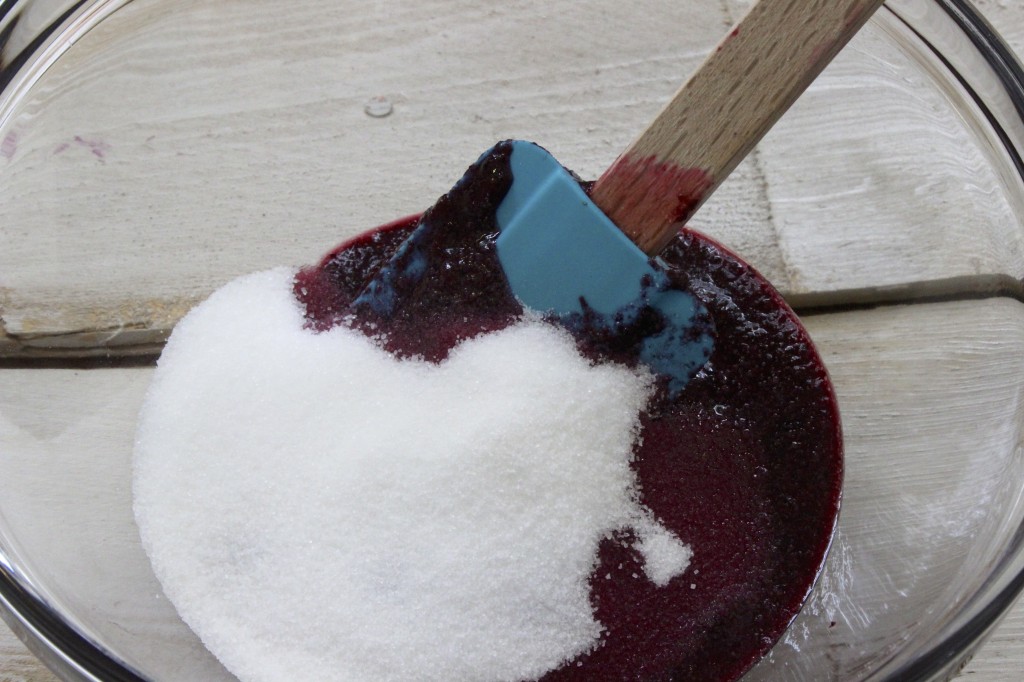 Once cooked down, it was then added to the raspberry puree. 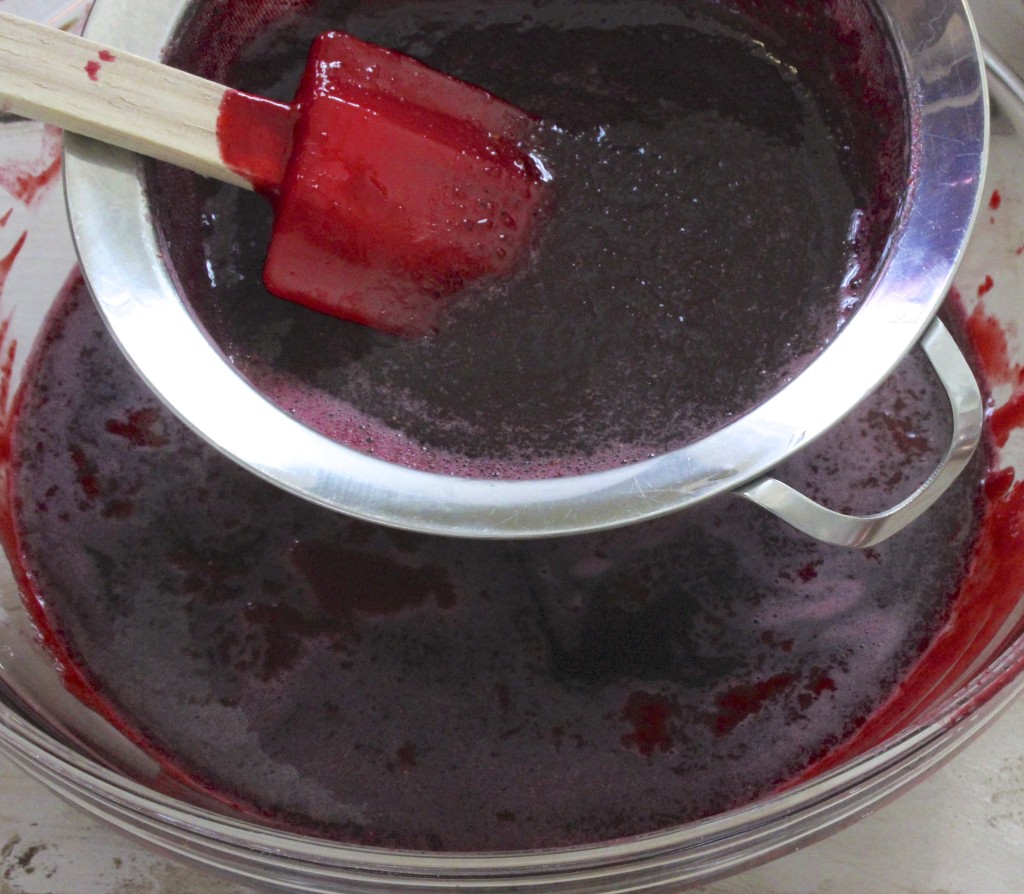 The two mixtures were folded together. 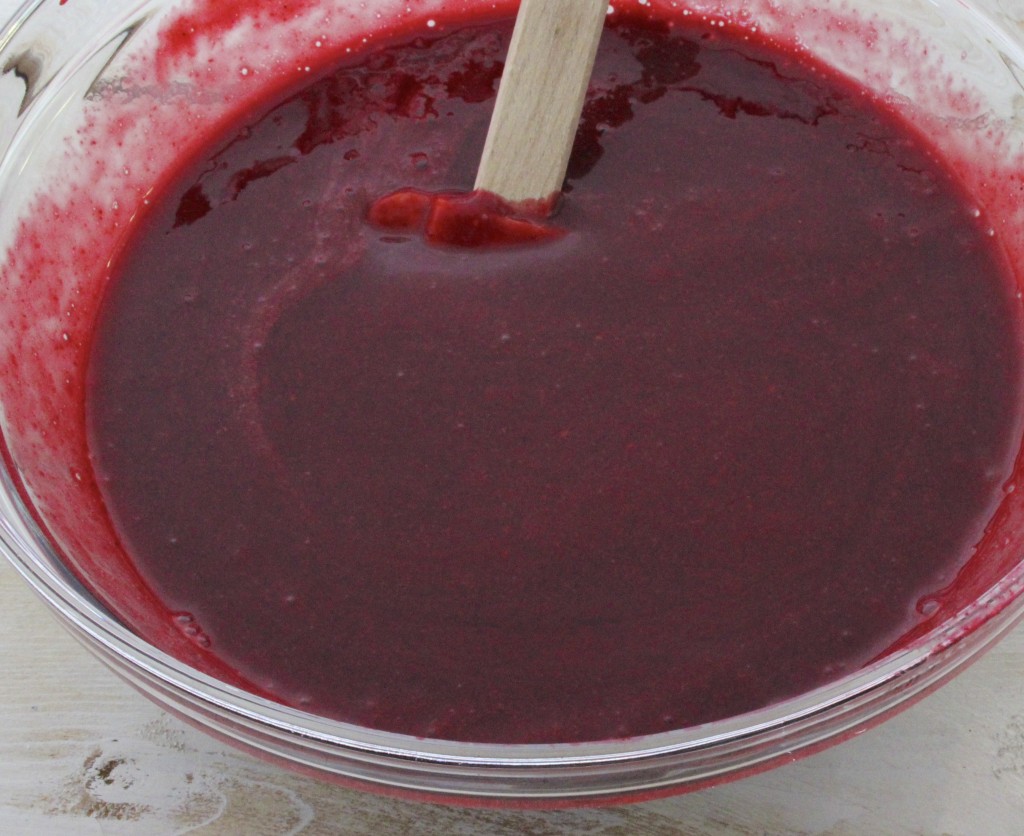 And then immediately chilled in an ice bath for thirty minutes during which time I stirred it twice.  The mixture will begin to thicken and after thirty minutes can be spooned into serving dishes at which time you chill it for four hours in the fridge. 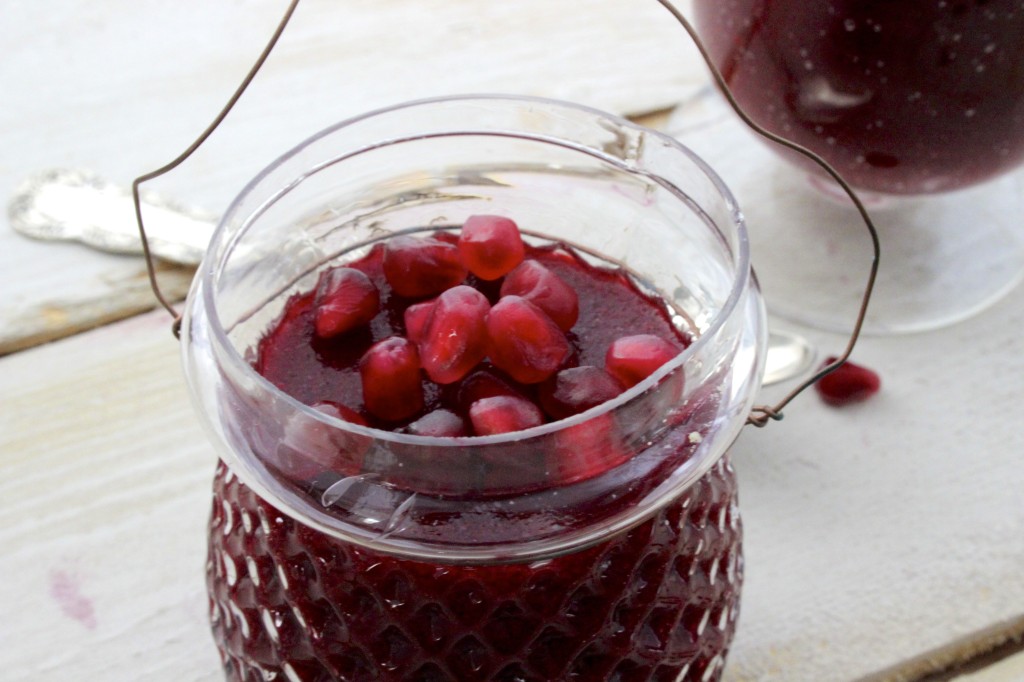 Before serving top with fresh pomegranate seeds.  It is tart.  Or should I say TART.  If you like things super sweet this is not for you.  Refreshing, yes.  Full of natural sugars, yes.  But if you have been weaned on Hostess desserts full of chocolate and yummy cream (like myself),  you might want to add more sugar during the cooking process (maybe a cup at least).  These are elegant and would be perfect for a special dinner or holiday.  Just add some cream to the top…