Pavlova.  You either know the name or you don’t.  You either appreciate the early efforts it must have taken to be her or you mock the simplicity.  Being a dancer since a very young age, I always had a small black and white postcard photo of Anna Pavlova in my bedroom…then on my bulletin board in college….then on my inspiration board as a young adult…and finally on my desk as a teacher.  Today I’m not sure where it is.  And that may be partially why I’ve been in a creative rut.  But I’ve always loved her even when, as a young teenager, my ballet teacher called home one night to inform my mother that I just did not have the body for ballet.  A bit heartbreaking for a girl whose entire bedroom was devoted to ballet…but no worries…I went on to discover that for me, modern dance was really much more interesting anyway.

Fast forward to 2007.  Summer.  Canada.  My then boyfriend of three or four months, a Major in the British Army spending his final two army years in Canada, made something for dinner that used a lot of egg yokes.  I don’t remember what we were cooking.  We cooked a lot.  But I do remember we had a lot of egg whites leftover.  I do remember he casually grabbed a bowl, some sugar and an electric hand held whisk and got busy making some meringue.  I do remember thinking who is this army guy that knows how to make meringue? I had never even made meringue.  He placed them into the oven of his army house kitchen (visualize an entire neighborhood of identical homes creating a large oval shape) which was really pretty nice for what I envisioned an army house kitchen would be and baked them very slowly…as in all night.  When they came out we covered them in strawberries and devoured them.

Fast forward again to 2010.  Summer.  England.  My husband of approximately one year and I were finally getting a big trip abroad…or home if you are him.  We went to visit his 95 year old grandmother or granny as he called her.  It was my first time meeting the family.  His grandmother was chatting to me and casually mentioned that as young girl she and her sister had danced for Pavlova at her home in England.  Wait a minute.  What did she say? My husband looked at me.  He had never heard this story.  His grandmother was not one to boast.  She was very practical.  She had decided to share this gem with me since she heard I was a dancer.  Had I not been a dancer I’m fairly certain no one in his family would have ever discovered this little story.   It was the highlight of my trip.

And here we are today.  The very end of summer.  2015.  Tiny yellow leaves are falling outside my window.  I found myself with some egg whites and thought I’d try to make my own meringue.  And, as I am feeling fairly detached from my old life, I thought I’d make a Pavlova.  Because if you aren’t going to be dancing you could at least eat something inspired by dance, right? Pavlovas were said to have originated in either Australia or New Zealand depending on which camp you belong to.  They are said to have been created in the mid 1920’s after Pavlova toured both countries.  Were they created because they were inspired by Pavlova’s tutu or named after her by a woman who bit into a meringue and said it was as light as air like her dancing? We will really never know.  Nonetheless…I’d rather be a dancer who had a dessert named after her than a dancer like Marie Taglioni who had balletomanes so in awe of her that they claimed to have eaten one of her ballet slippers.  That is a recipe I’ll pass on.

So back to today…these are so easy to make.  It does take time.  Lots and lots of time.  But that time is all spent in the oven…which really…is non-time because you can be accomplishing something else while they bake. Like remembering all the ways your life led you to this story (very productive day…).

Despite having loads of cookbooks, I could not, even after a good effort of looking, find a recipe for a Pavlova.  I turned to Ina.  She has a beautiful Pavlova recipe.  So I borrowed it but I started with 5 egg whites (not four…mostly because I had already cracked five eggs earlier and had five whites on hand), 1 cup of sugar, a pinch of salt, 2 teaspoons of cornstarch, a splash of vanilla and a teaspoon of white wine vinegar.  The egg whites and salt were whisked in a mixer (and sadly ours sounds as though, after a twenty year stint, it is on its last leg…) until they were stiff.  The sugar was slowly added in until smooth white peaks formed.  The mixture was removed from the mixer and the cornstarch was sifted in.  The white wine vinegar and vanilla were folded in and then the bowl was set aside. I read that by adding the vinegar and cornstarch to the mix the inside of the Pavlova would not turn into an inedible caramelized goo but rather become marshmallowy. I then lined a baking sheet with parchment paper and, as Ina suggested, traced a circle on the paper with a pencil.  The paper was then flipped over and placed back on the baking sheet.  The meringue was spooned into the middle of the circle and then smoothed out.  I made mine with a well in the center so that I could fill it up later.

The meringue was placed into a 180 f. oven where it was supposed to be baked for 1.5 hours.  Mine was not done.  I left it for about two more hours.  I think it depends on the oven.  Better to go low and slow I’ve heard.  At the end of the baking the door was left shut and it cooled there for one hour.  I removed it from the parchment and placed it atop a plate where spoonfuls of freshly made whipped cream were dolloped on.  I topped ours with some fresh raspberries and tarragon berry sauce which had been made earlier in the day.  The meringue was crunchy outside and melt in your mouth delicious inside.  So good that you barely noticed you were eating it.  The berry juice was a final reminder of summer which, other than the remaining heat,  seems to be quickly on its way out here.  By the time this recipe was complete the few leaves falling outside my window had made my back garden look like a field of scattered yellow paint drops.  This is a large dessert.  One that next time I will make in smaller portions.  For now I’ve managed to save some for that British Army boyfriend/husband of mine to try when he gets home from work. 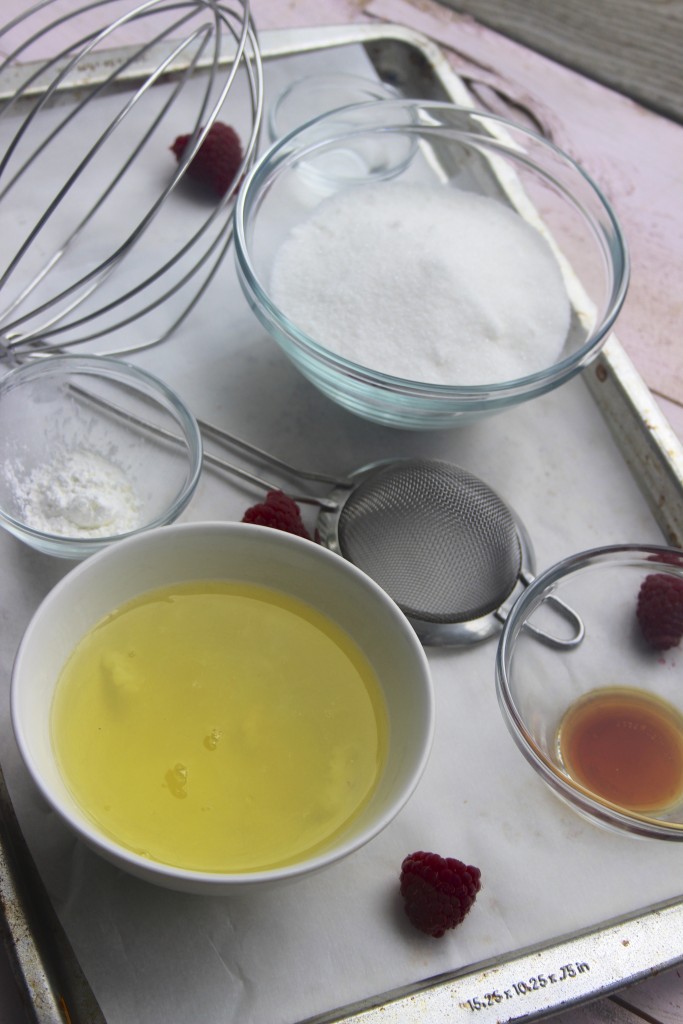 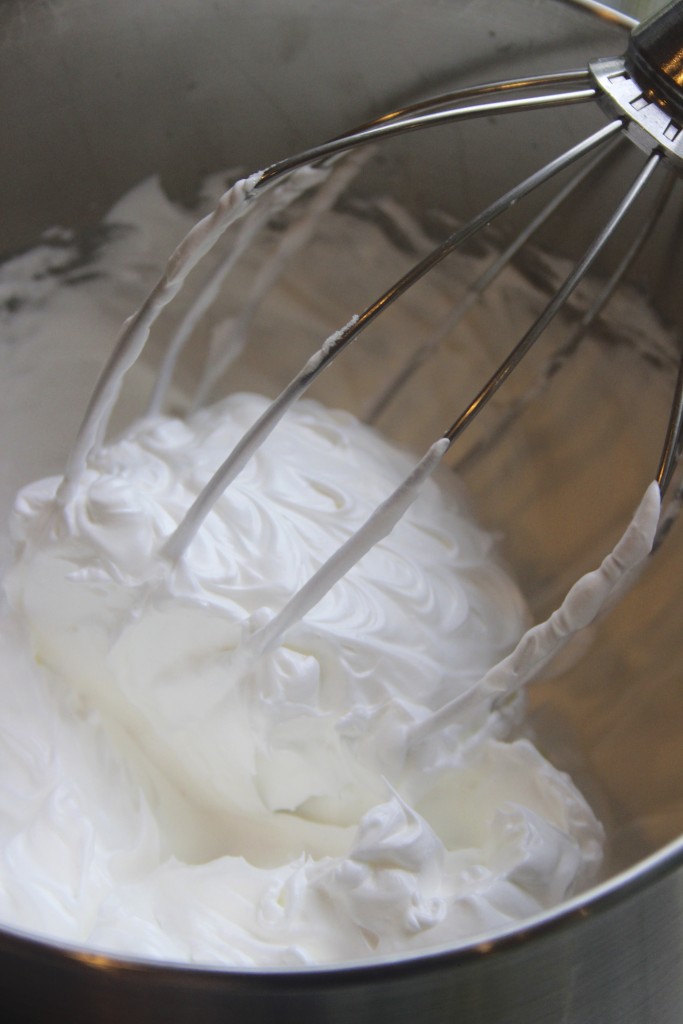 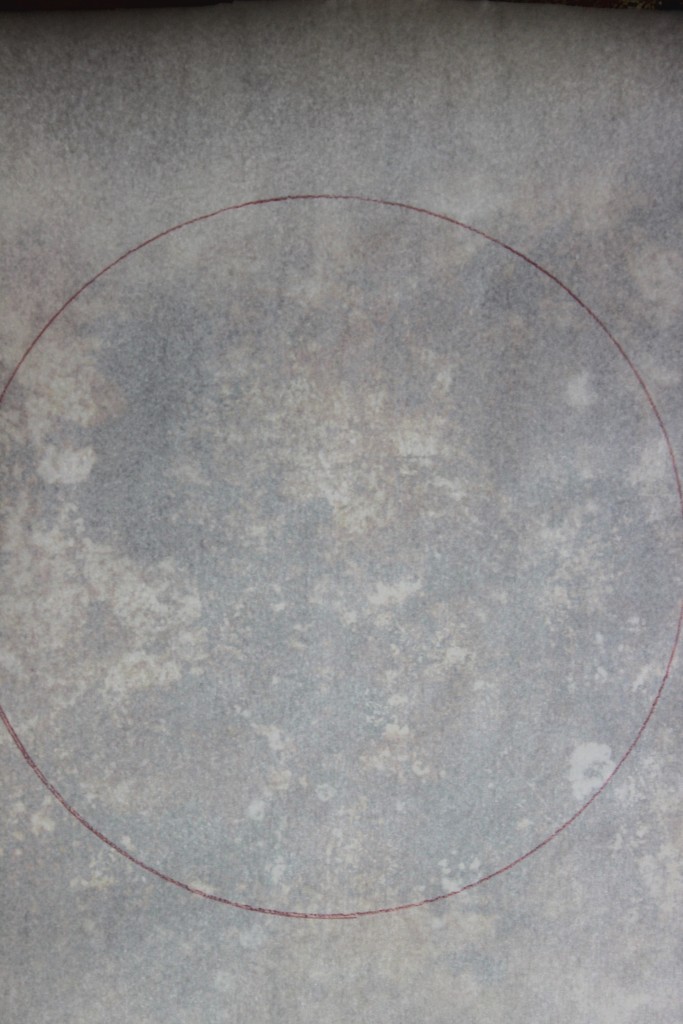 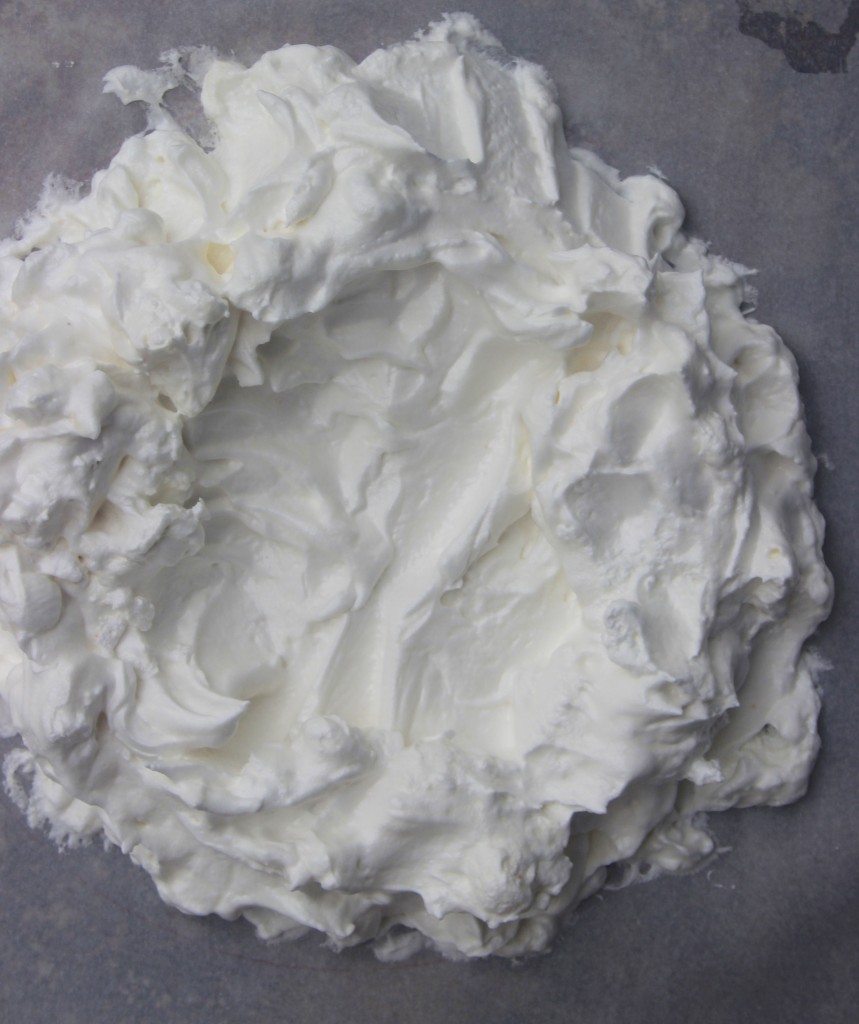 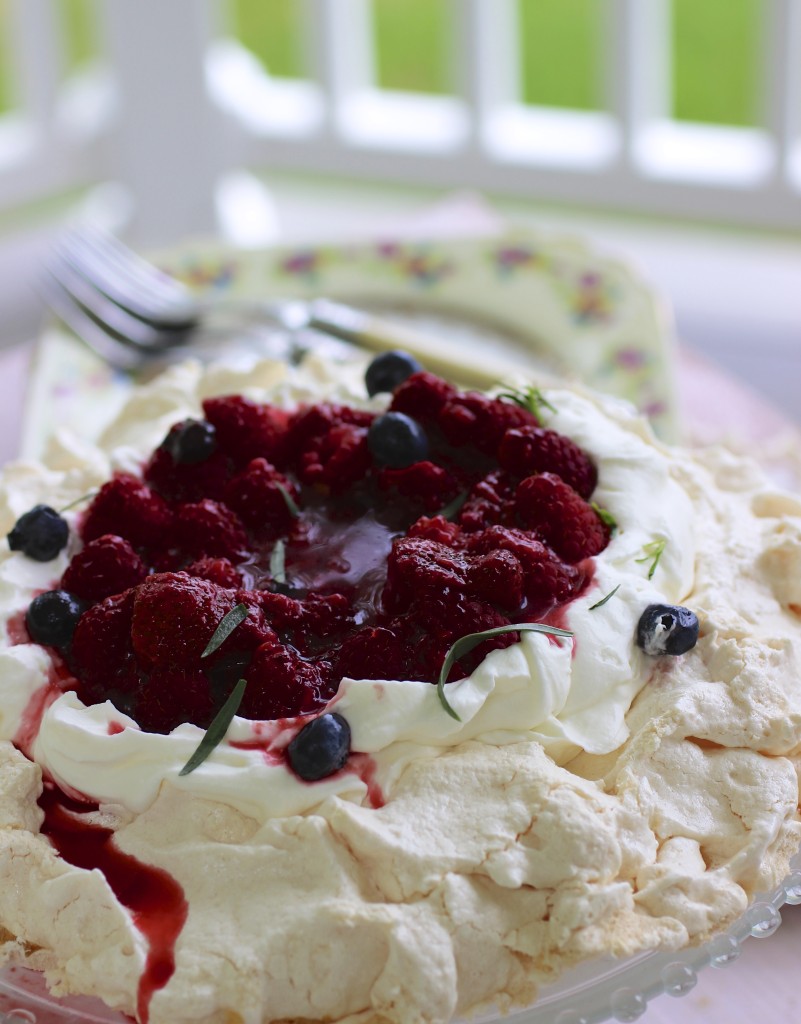 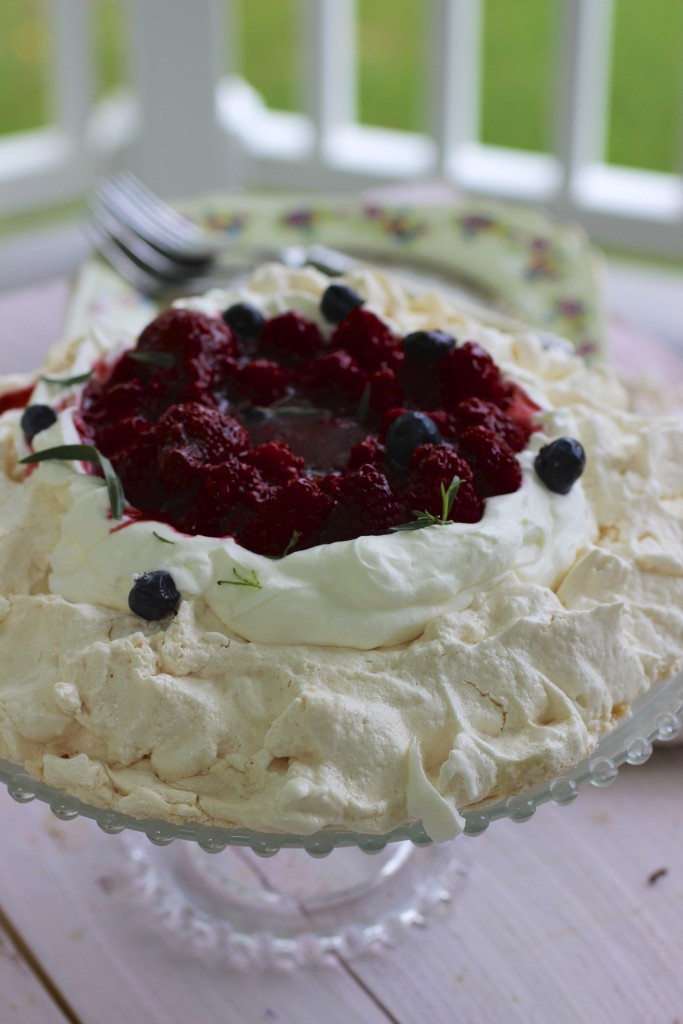 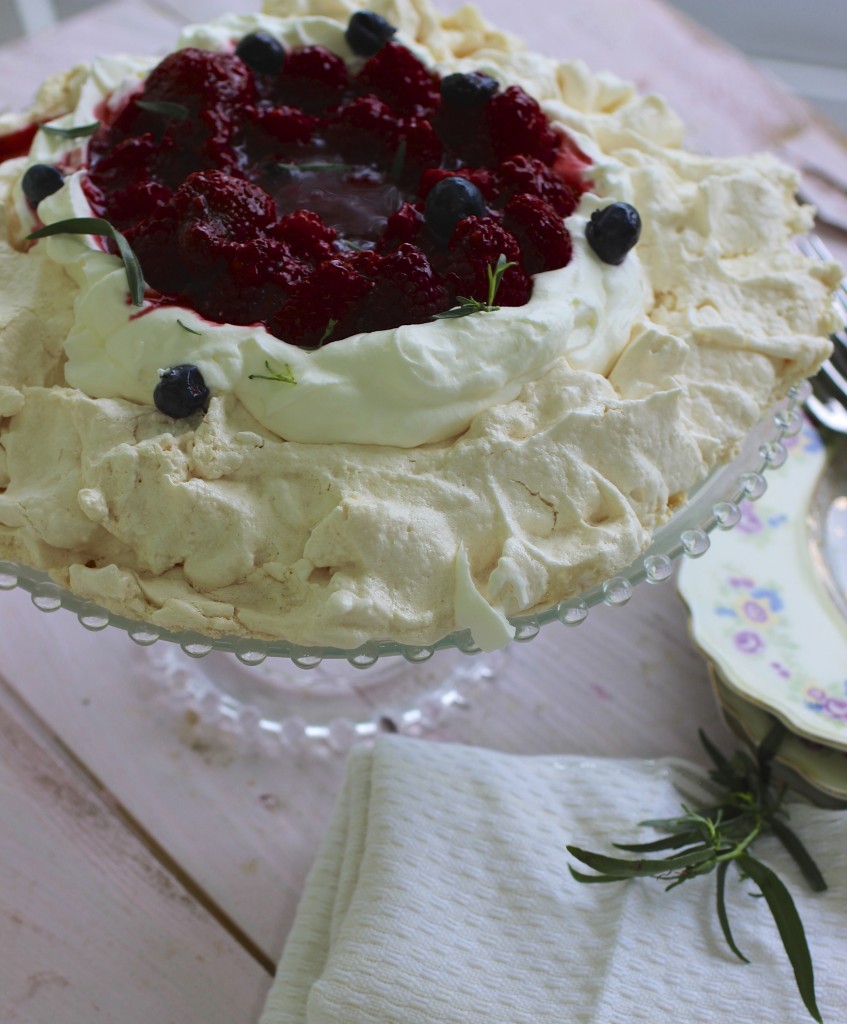 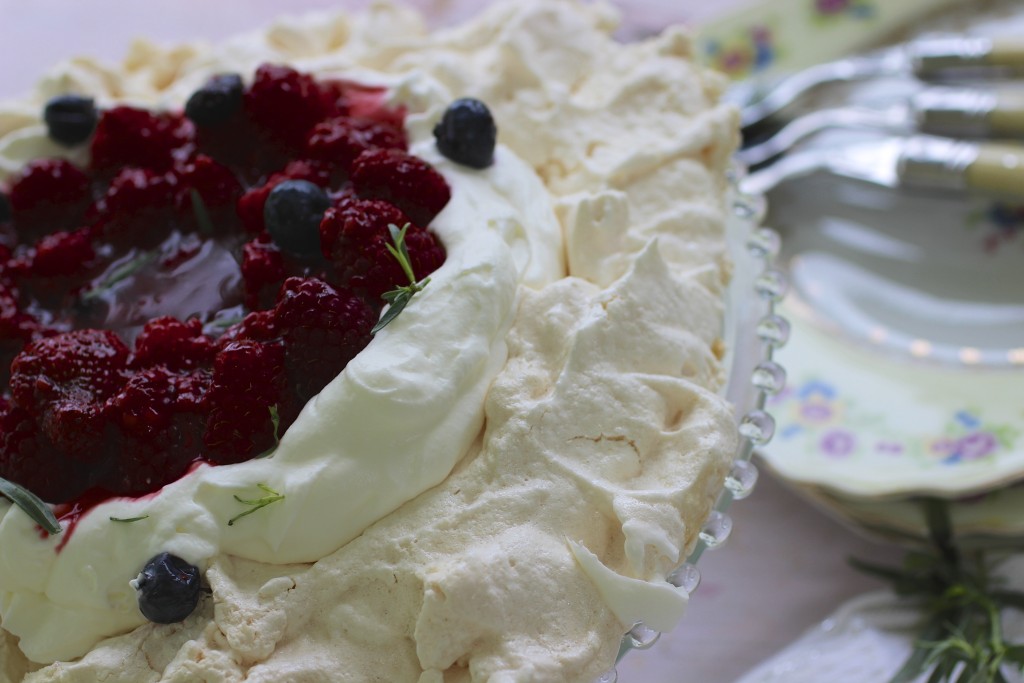 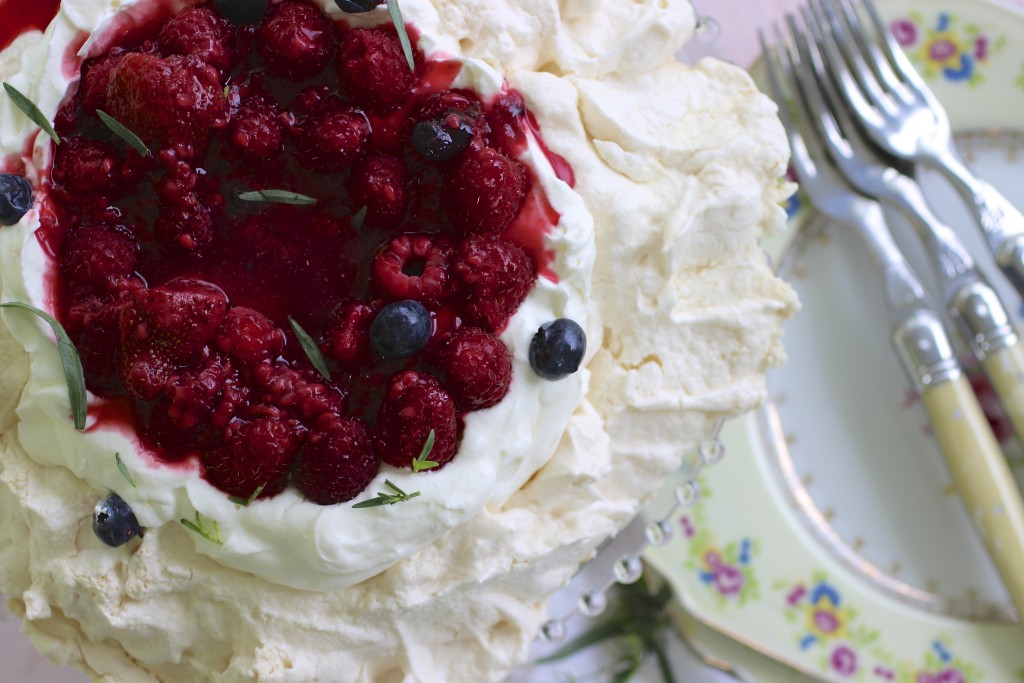 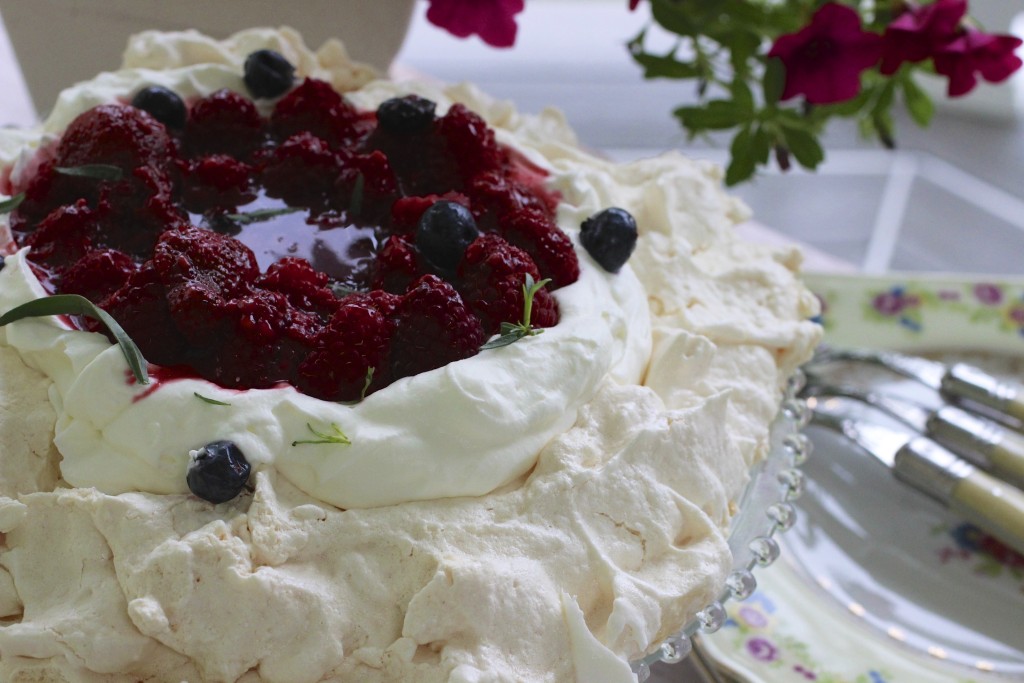 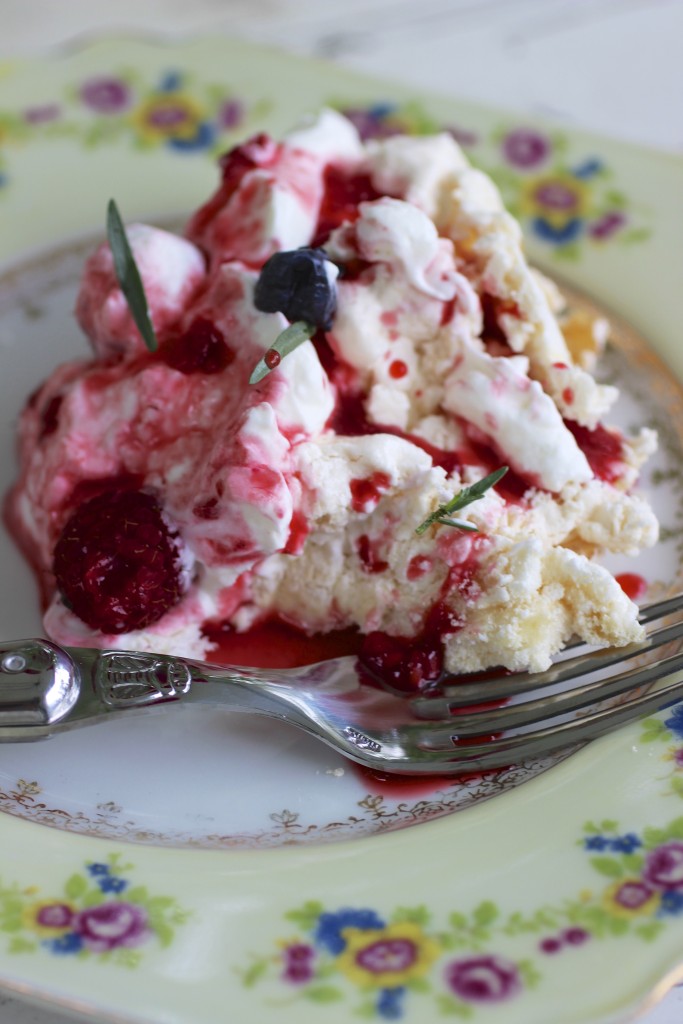 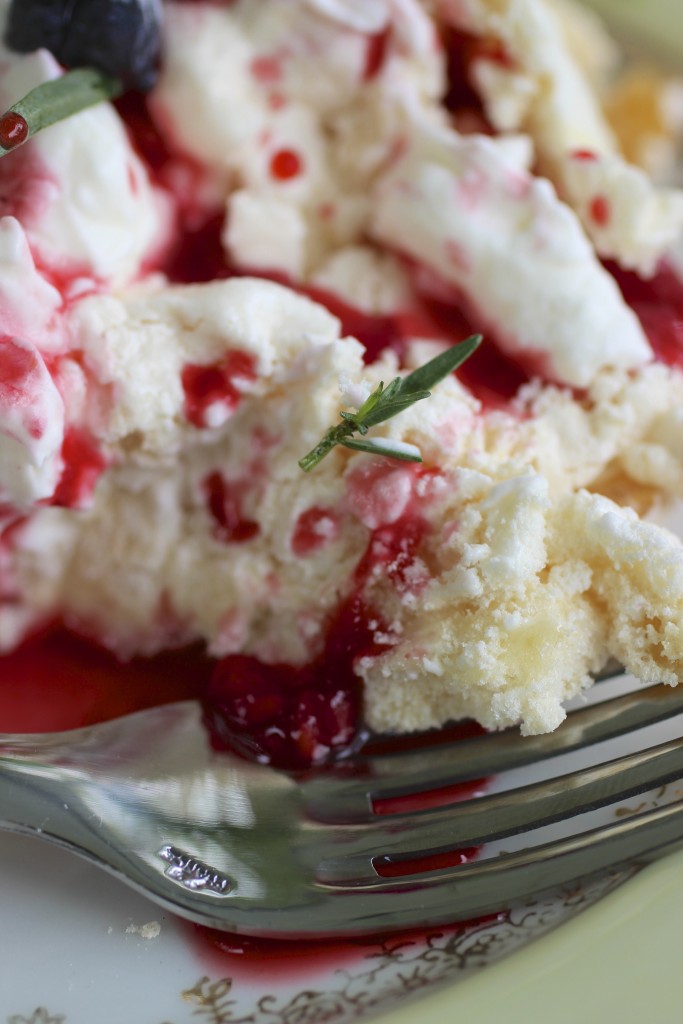 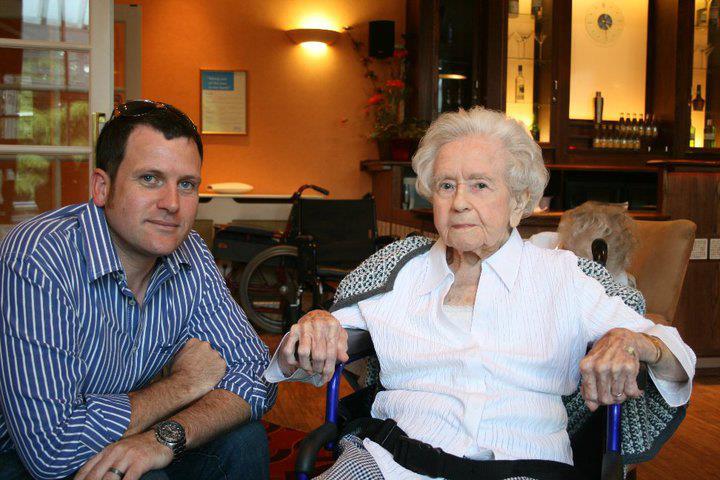