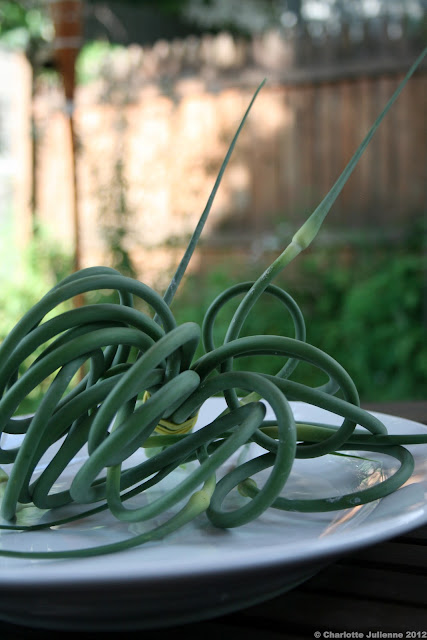 Last Friday I found a fabulous little farmer’s market at Shakespeare & Company in Lenox, Massachusetts.  It was a hot and sunny day and the vendors were all set up under perfectly white tents selling strawberries, local wines, cheese and a variety of vegetables.  It is still fairly early in the growing season here in New England and while we are beginning to see this summer’s crops some of the best finds are those of late spring such as these fragrant garlic scapes.
Garlic scapes are only available for a short time each season but if you can find them you will be forever addicted.  They have a subtle garlic scent but once cooked have the flavor of asparagus with only the tiniest hint of garlic. 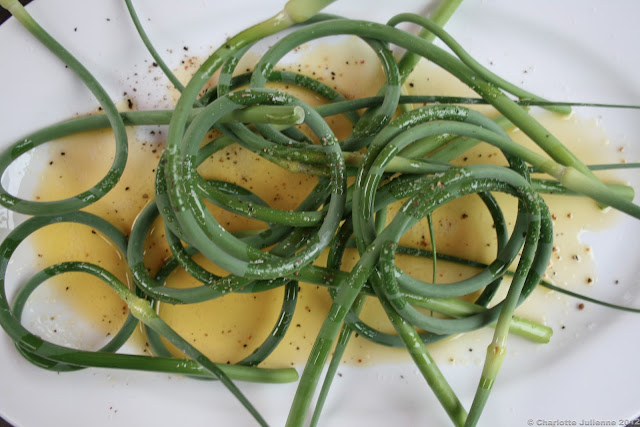 We began by tossing our scapes in olive oil, kosher salt and pepper. 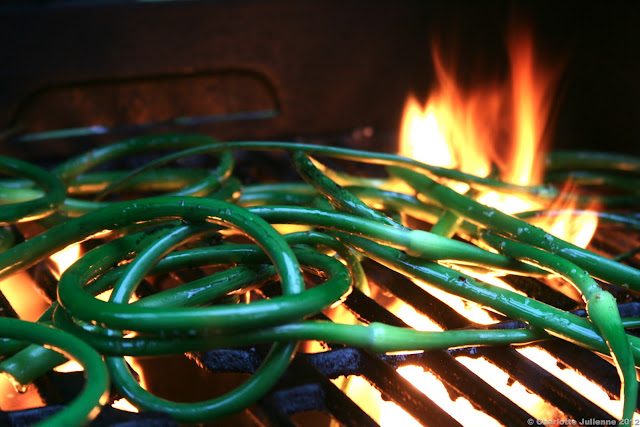 We put them on an open flame on the grill for about two minutes each side until the scapes became charred. 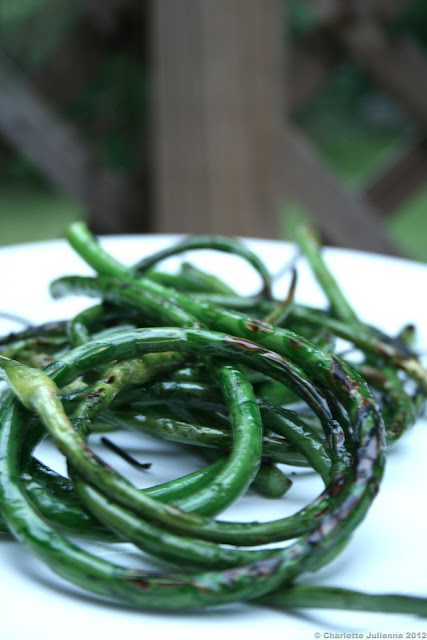 Earlier in the day we had made some pickled red pearl onions that we knew we would be using to top our burgers.  This was a super simple process, the hardest part being peeling the little buggers before we began! 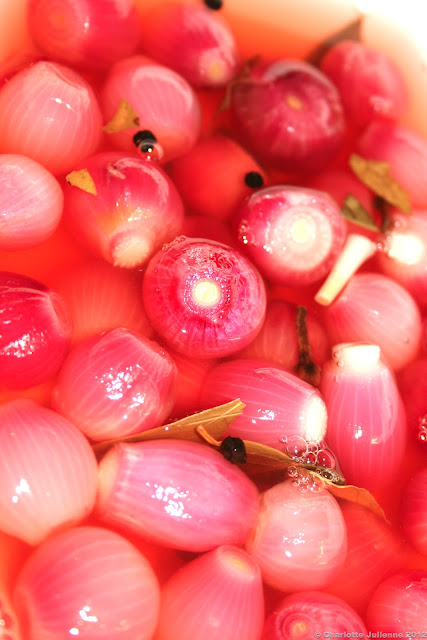 We peeled a small bag of red pearl onions chopping the ends only enough to keep the onion in tact.  We added these to a small sauce pan to which we poured 1/4 cup of sugar, 3/4 cups of cider vinegar, a few peppercorns, two bay leaves, and a pinch of kosher salt. We brought this to a boil and then turned down the heat and left simmering for about ten to fifteen minutes at which point we removed it from the heat and allowed it to cool. 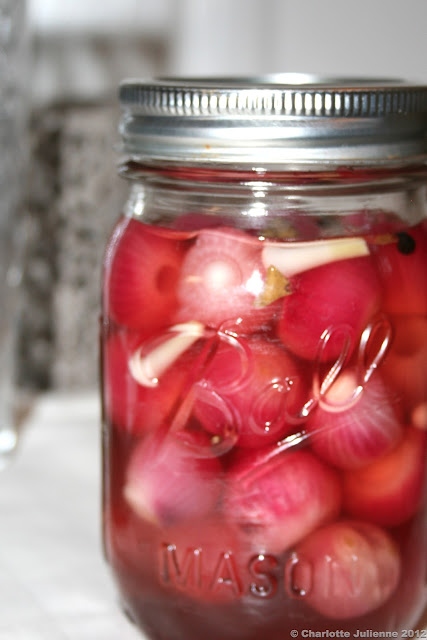 When it was entirely cool we poured it all into a canning jar, not because we are planning on canning these, but rather just because we loved the way it looked. 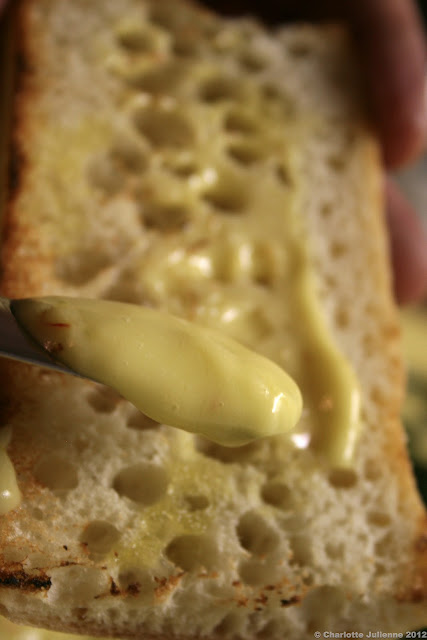 In the meantime we made a rather addicting aioli sauce to spread on our grilled baguettes.  I have found true love with this aioli.  It was the most delicious sauce I have had in a long time.  A quick aioli tip…when making it if you don’t want the sauce to be overpowering with garlic flavor take your garlic clove and boil it in a saucepan filled with milk.  When it is done boiling remove the clove, wash it off and allow it to cool.  This will take some of the sharpness away from the clove of garlic and make it have a bit of a roasted flavor. 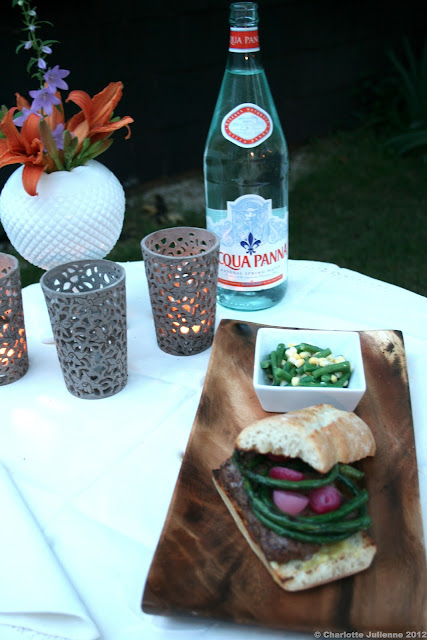 We served our burger with a small salad of corn and green beans.  It was such a fun dinner for an early summer evening.  The garlic scapes and the onions combined with the aioli all complimented each other so well. 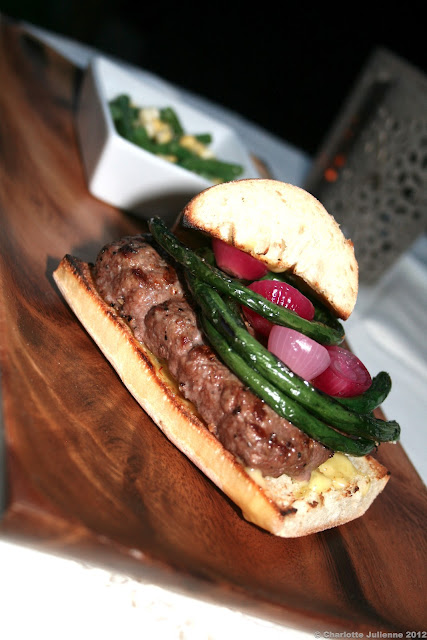