We buy a lot of bananas in our house.  They are generally used for smoothies or cut up and put into cereal. Every so often I find an overripe one (that had been forgotten as a lunchtime snack) nestled into the smallest compartment of a child’s backpack.   Overripe, smushy, brown…you know the ones.  Forgotten for one night in a dark spot and suddenly deemed not good to eat by the picky little eaters in this house.  But these bananas are not worthy of being wasted either.  So, if we are not having smoothies or making banana bread I LOVE to use them in whipped cream. 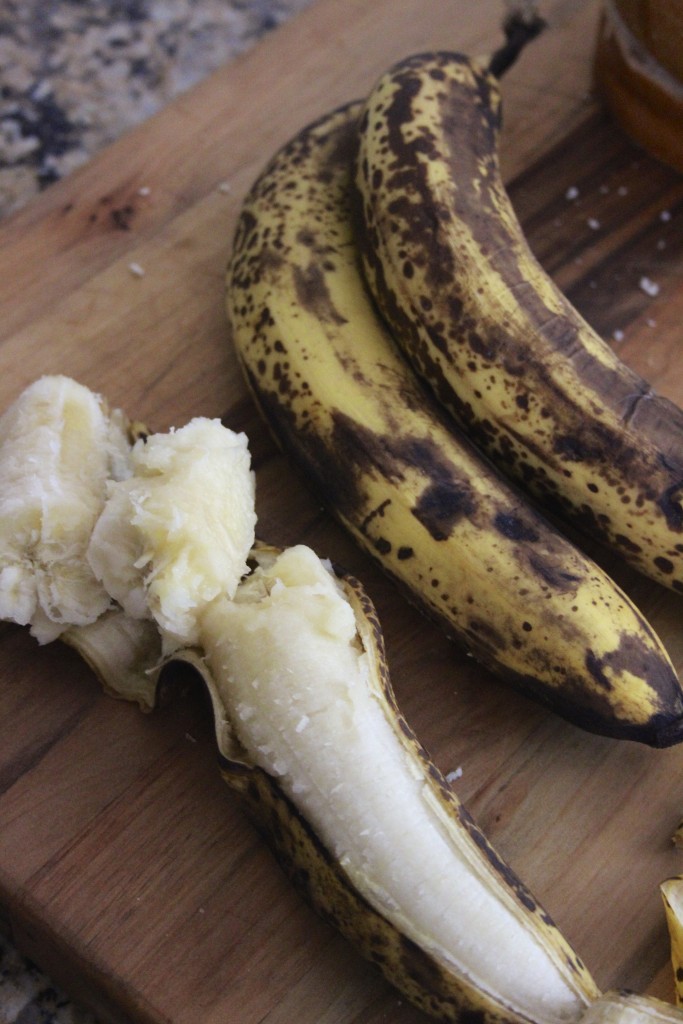 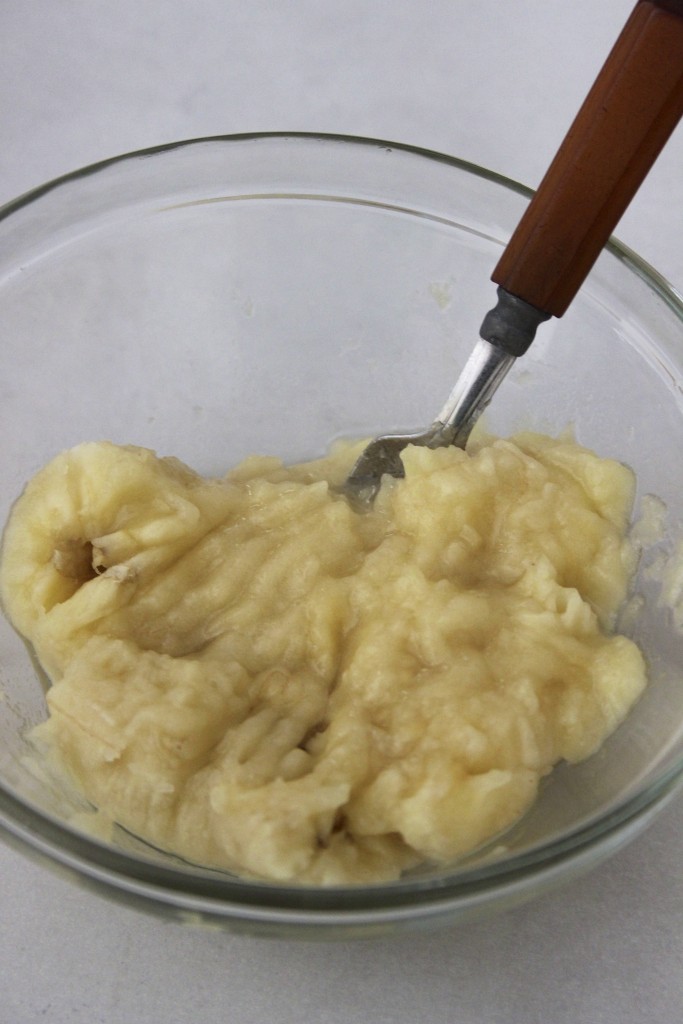 When I think whipped cream I don’t usually think of breakfast…but it is summer vacation and after four or more days of cereal our kids were ready for a “real” breakfast.  French toast is not something we have often.  I’m not really sure why as we all love it.  When I was little I had it all the time.  But much like pancakes, we save it for special mornings and tend to stick to eggs for the other days.  With a large leftover loaf of Italian bread on hand it was the perfect choice.  Cut thick and dipped into our egg, milk and cinnamon mixture the bread was grilled until golden brown. 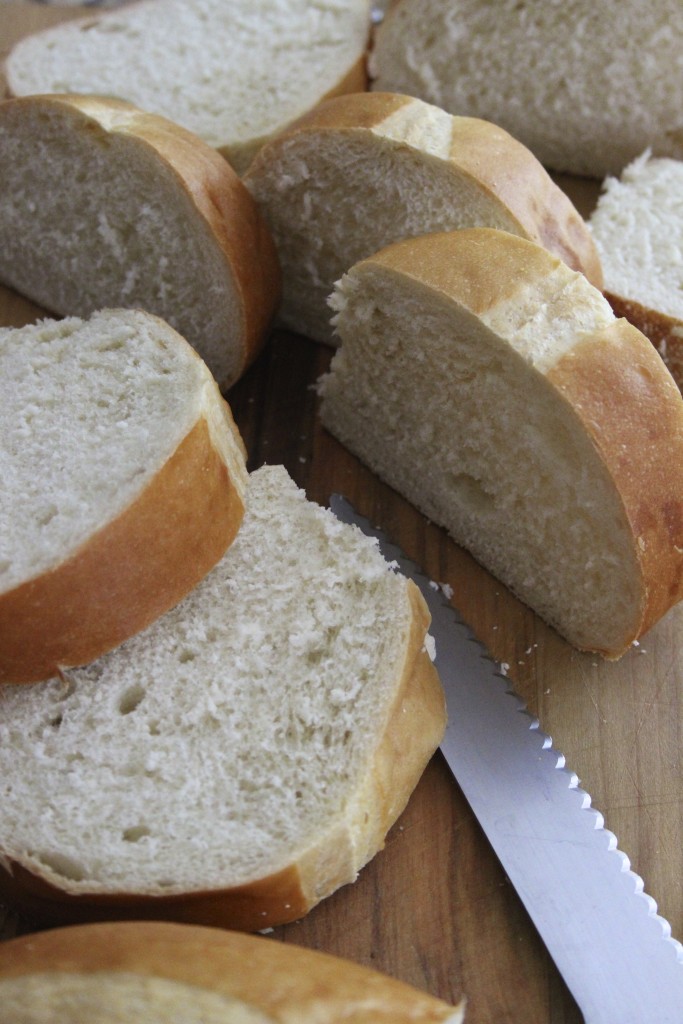 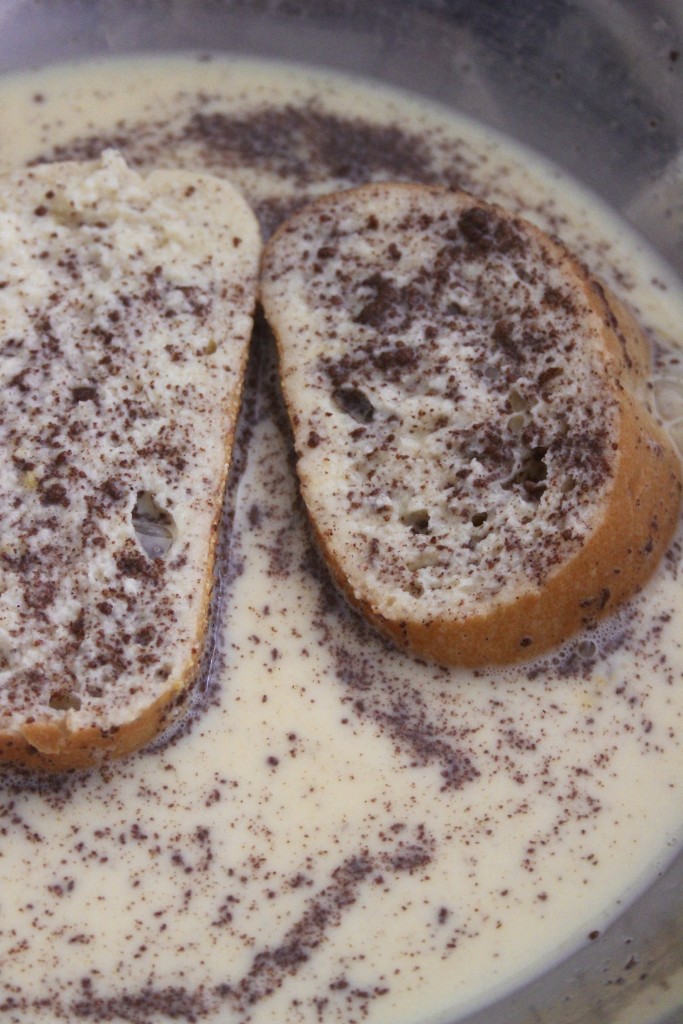 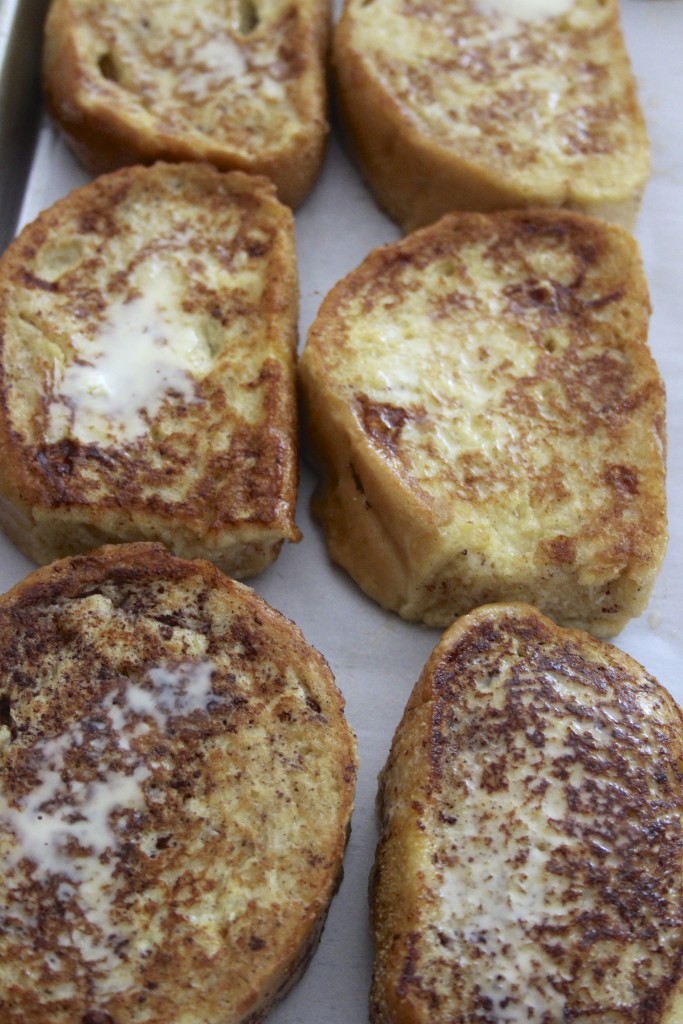 I’ll be honest…there was no measuring going on here.  The leftover remnants of our heavy cream container were poured into our mixer and I added some confectioner’s sugar and vanilla and then, using the whisk attachment, whisked on high speed until soft peaks began to form.  While I was waiting I took that sorry little brown banana and mushed it up in a bowl.  When the whipped cream was ready I carefully spooned in a quarter of the mushed banana and folded it into the mixture.  Banana is a strong flavor.  We like it subtle so we only used a little.  I find it goes a long way. We had the luxury of having two cooks in the kitchen on this particular morning.  So as my mom was grilling the French toast, I was making the banana whipped cream.  You could, however, just set your oven to warm and place the bread in there as you grilled it.  The whipped cream can easily be made ahead and the bananas folded in at the last minute. 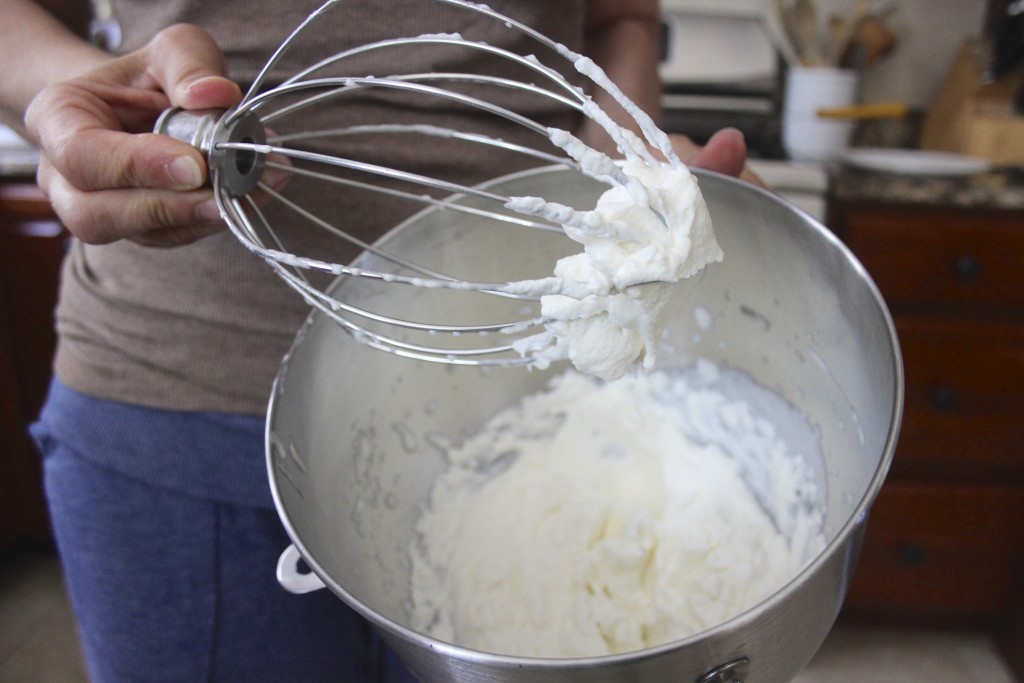 The remaining banana, along with some strawberry jam, was dolloped atop the grilled French toast and then topped with a heaping spoonful of whipped cream.  Sweet? Yes.  Filling? Yes.  Especially special for a summer school vacation morning? Oh yeah.  It would also double as a great dessert. 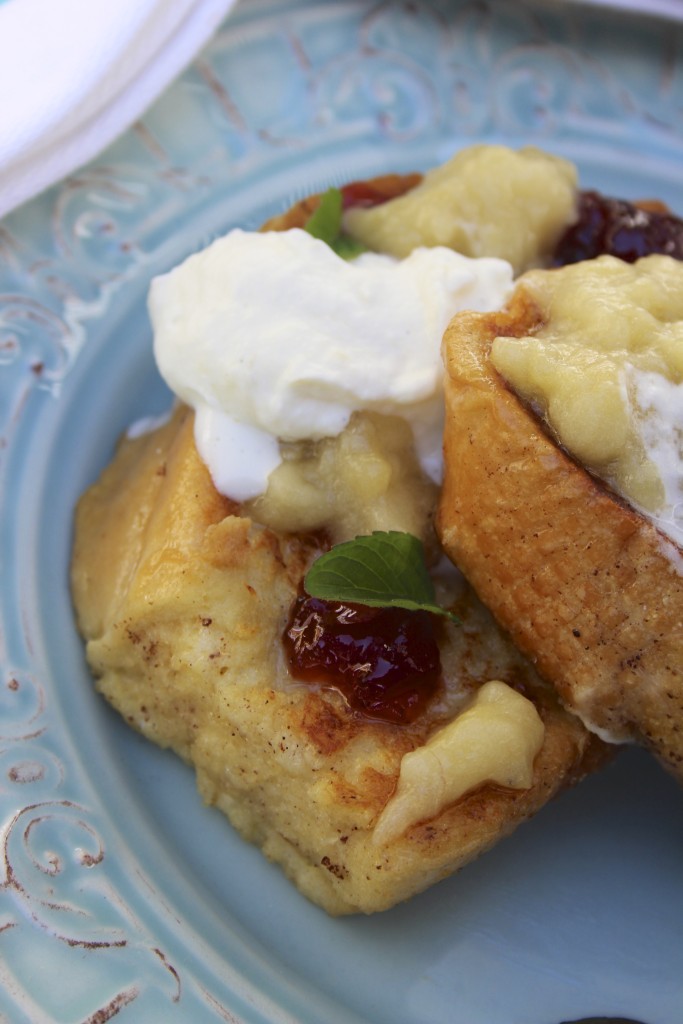 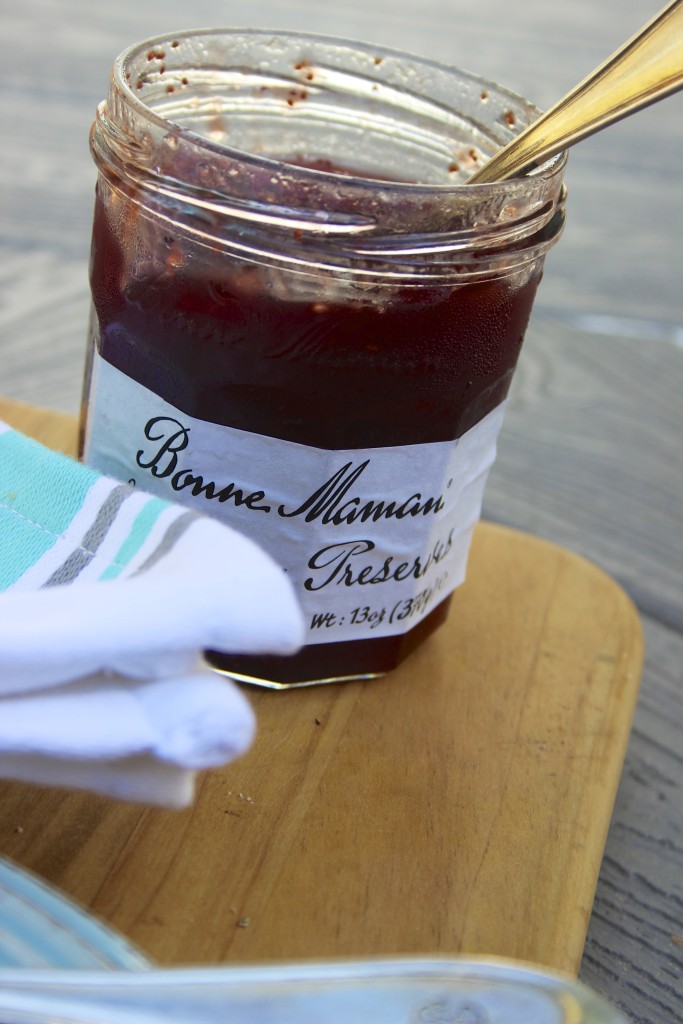 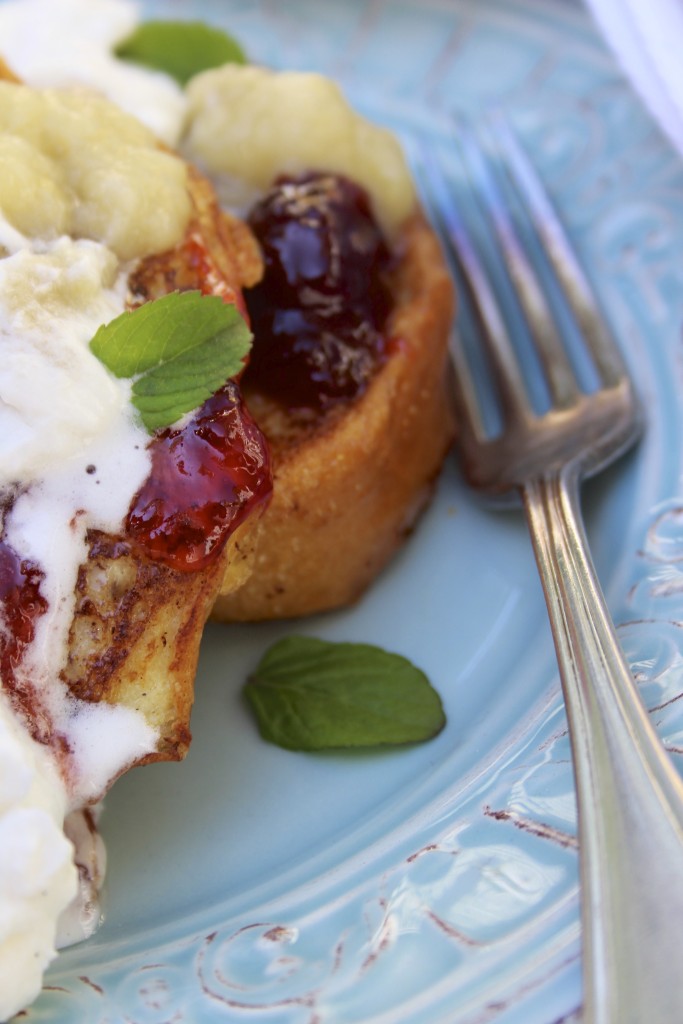 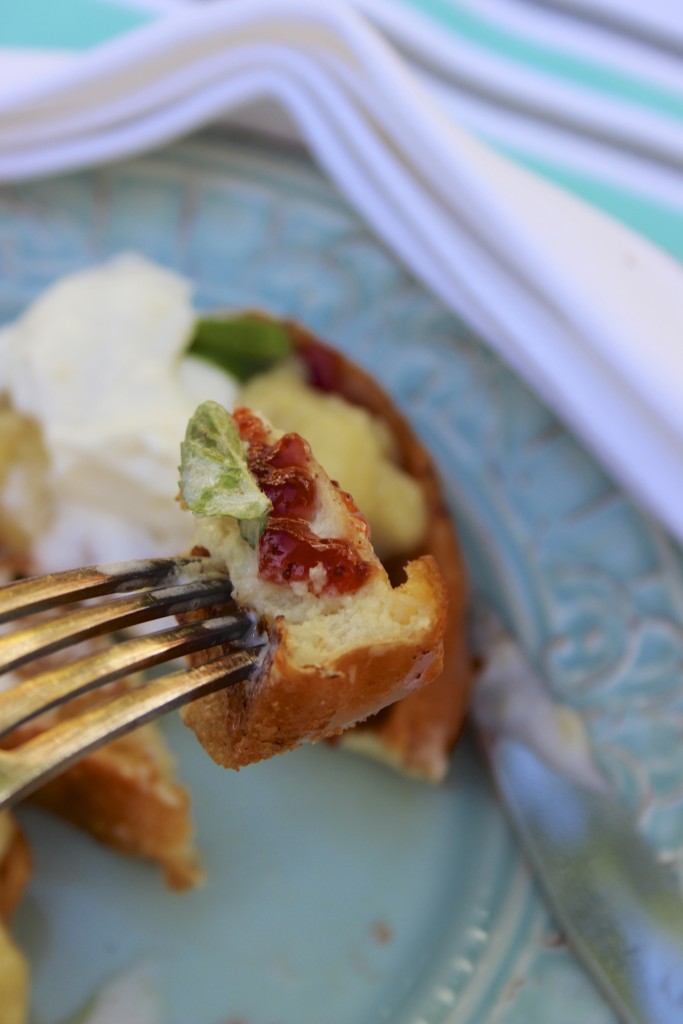