It is finally tomato season here in New England and one of us couldn’t be happier…the other…well the other can’t really look at a raw tomato due to a childhood memory of eating a bad one.  So we eat a lot of roasted, grilled or cooked tomatoes.
A couple of weeks ago we were looking at the Bon Appetit “cook the cover” contest for an open faced tomato sandwich.  We were not entering this contest but it did inspire us to make our own open faced tomato sandwich. 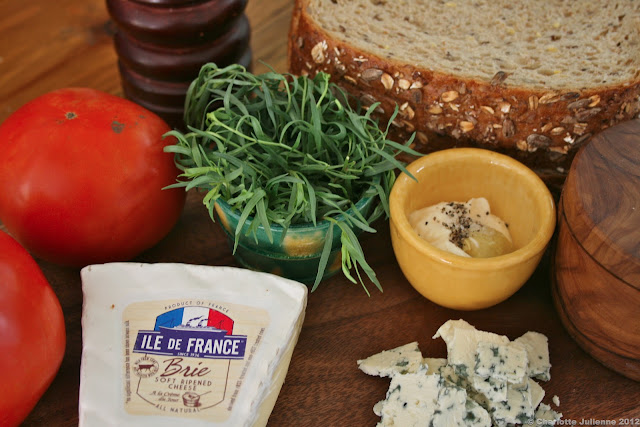 The thing we like about open faced sandwiches is that they don’t (for whatever reason) seem as filling as an actual sandwich.  It is more like eating toast with something on it…tricking our minds so we can eat two slices rather than one.
We decided to make our sandwich with brie, blue cheese and tarragon. 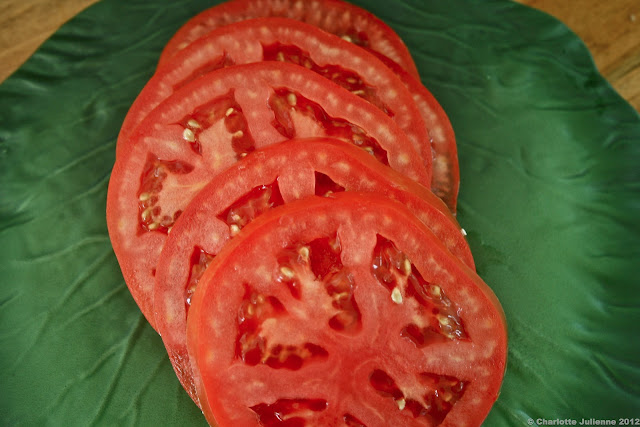 We began by slicing our lovely tomatoes which came from a local farm.  We then sprinkled them with a little salt and white pepper. 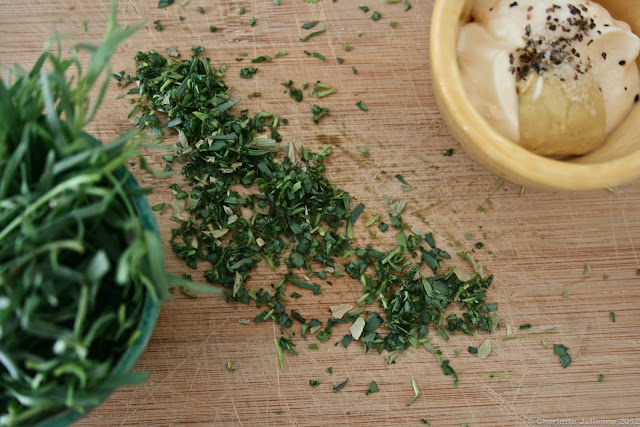 We spooned some mayonnaise, dijon mustard, and coarse ground pepper into a small dish.
We decided to use a mix of fresh and dried tarragon as their flavors are quite different.  This was chopped fine… 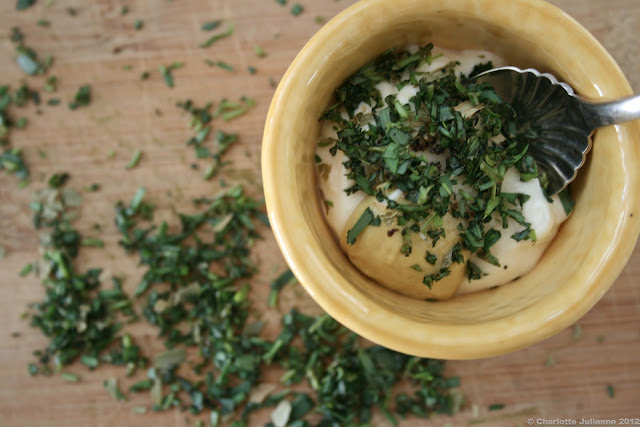 and then added to the mayonnaise and mustard mix… 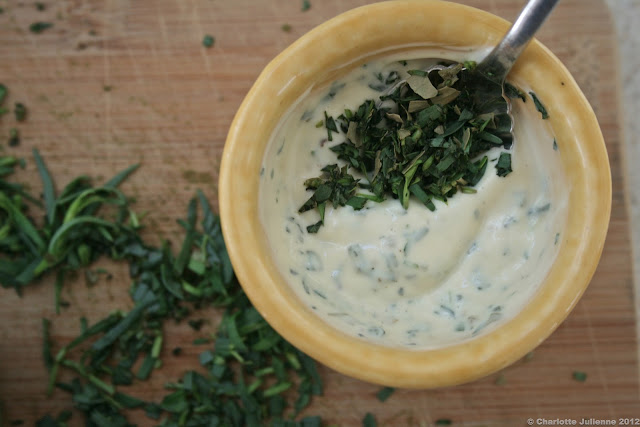 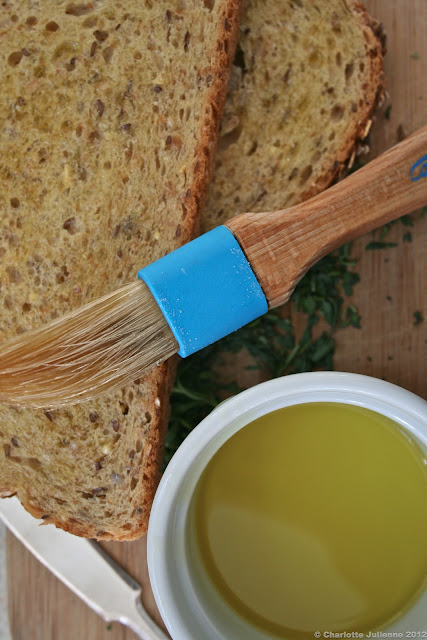 We lightly brushed our bread with olive oil before placing it under the broiler to toast it until golden brown. 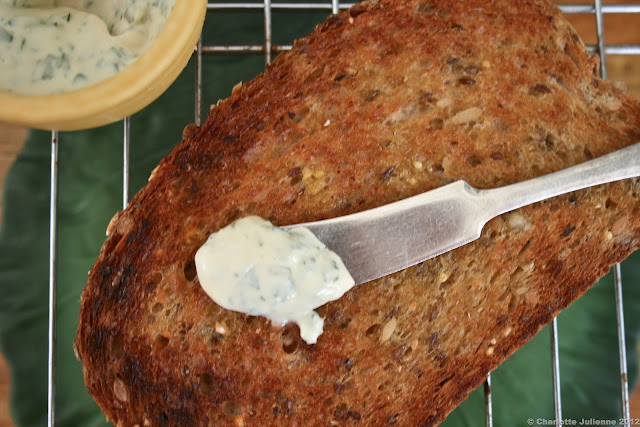 When the toast came out of the broiler we placed it on a cooling rack so that it would maintain its crunch. 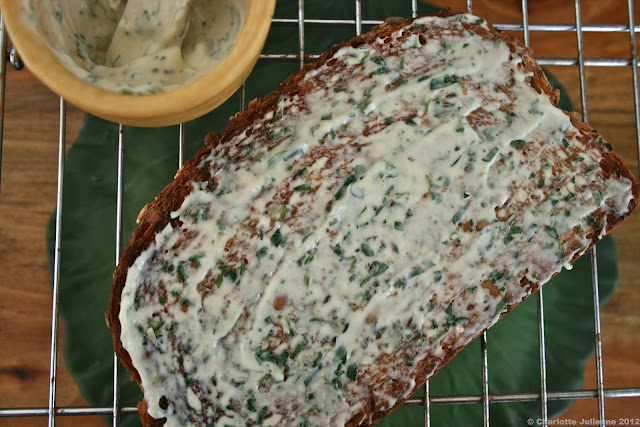 We spread the mayonnaise, mustard and tarragon mix on the toast.  My grandmother always used to tell me that my grandfather, who I never met, always loved for the spread on his bread to reach all the edges so that each bite had the flavor of what was spread on it.  I was just little when she told me this but I always remembered it and generally spread my bread the same way. 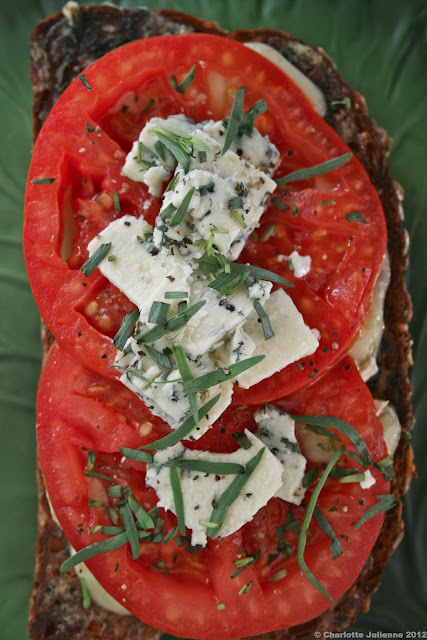 After we spread the tarragon mixture on the toast we placed a layer of brie cheese on the top and popped it back under the broiler until it was bubbly.
At the same time we lightly brushed our tomatoes with olive oil and grilled them very lightly just for a moment on each side…now this was really just so we would both be able to stomach this sandwich…if we both liked raw tomatoes the truth is the grilling part might have been skipped!
When the brie was melted we removed the toast from the broiler, placed the tomatoes on top and then sprinkled it with crumbled blue cheese and more tarragon and pepper. 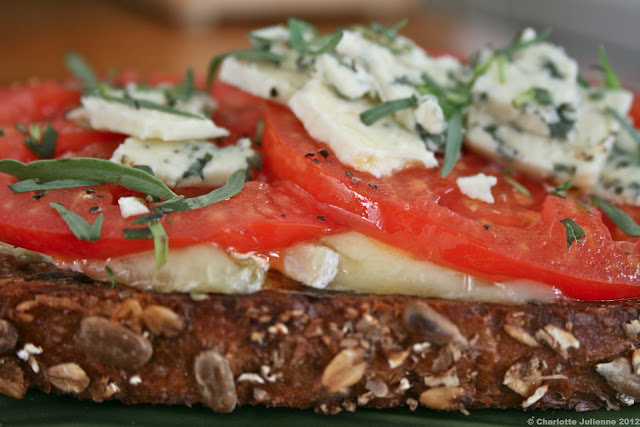 The open faced sandwiches were sliced in half and devoured quite quickly.  The crunch of the bread was a great contrast to the creamy brie.  This sandwich had layers of flavor so that each bite sort of gave out a delayed reaction in taste.  The final flavor of the blue cheese added a great tang to the sandwich.  If only tomato season could last all year!