We are on a bit of a comfort food kick here.  It has been cold and windy and the leaves are falling like mad.  Yesterday we discovered maple leaves on the ground and got quite excited because, despite our best efforts in looking, we have not seen a maple tree here at our new house.  This gave us hope that they are out there in the woods and we could potentially tap them for syrup next year.  I see a hike in our future…but in the meantime, we have been taking comfort in those yummy warm foods that make us love autumn so much.

Once upon a time I had a bread pudding that was to die for.  I was in Philadelphia performing at the Philadelphia Fringe Festival.  We had had a morning full of rehearsals and a night of performances ahead and stopped for a quick lunch.  I think I skipped lunch and ordered dessert (clearly I was not one of those dancers that did not eat…)– a bread pudding, which, I do think is safe to say, I had never ordered before.  It just sounded like something I would like.  It was buttery and creamy and sweet and totally fabulous.  It also provided me with enough sugar to get through the next eight or more hours of dancing that I was about to do.  I will never forget how fabulous it tasted.  It got me hooked on bread puddings for life.

Here, the wind has been howling and trees rustling so it seemed it was the perfect night for bread pudding.  We made a savory parmesan and pancetta version which we had read about in Bon Appetite magazine a few years back.  It was so full of flavor that I have a feeling it will be repeated with different ingredients all fall and winter.  This one had a little bit of a kick to it, which I am really trying to get better about loving.

We preheated the oven to 350.  The oil was heated in a large skillet and the garlic and red pepper flakes were added in for about 30 seconds before the broccoli rabe, salt and pepper were tossed in as well.  We cooked this for about two minutes until the broccoli began to wilt.  It was then set aside to cool

The eggs, milk, salt and pepper were whisked in a large bowl and the broccoli, bread and 1/2 cup of the parmesan were added in.  This was transferred to a baking dish and topped with pancetta and parmesan.  We baked it for about 50 minutes.

You can see how it could be personalized to include anything you love or had in the house.  The basic structure is so simple and the flavor combinations are really endless.  We like to serve ours in deep soup bowls.  It is a full of flavor and something the our entire family loves.  Especially on these chilly nights. 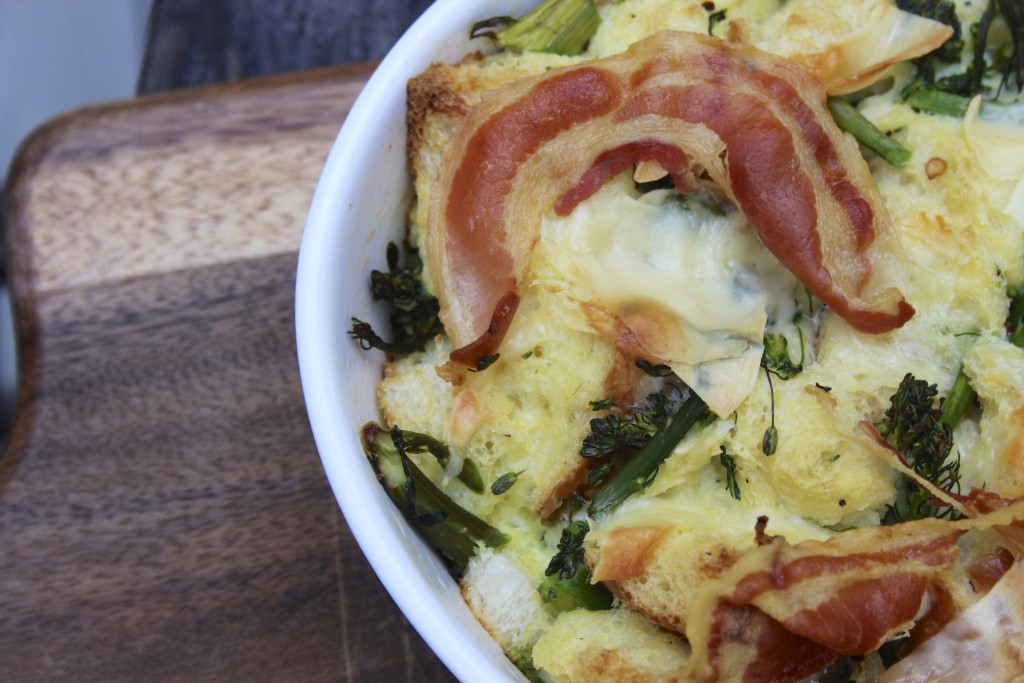