In this house we are getting ready for the Olympics…which as you know is in England this year! We plan to watch the events and eat British food for two weeks straight.  To get ourselves ready (and in the true British spirit) we thought we’d make a simple lunch using Stilton cheese. 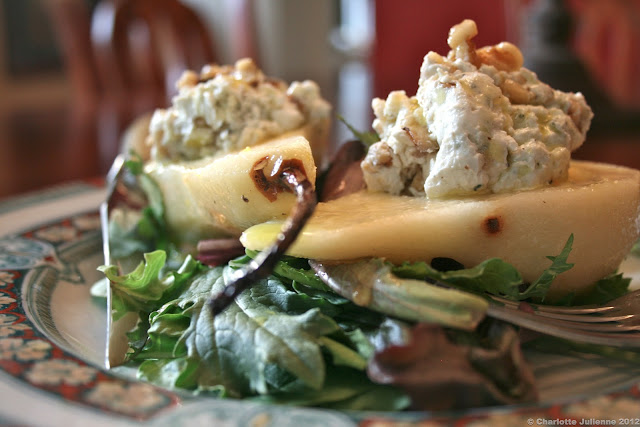 A little bit about Stilton cheese… One of us grew up in a little village in England called Roxton which was on the ancient Great North Road.  Stilton takes its name from a village thirty miles north of Roxton which also sat on the Great North Road. When stagecoaches stopped at the Bell Inn on their way to London, passengers were offered a delicious blue cheese made in the farms around the area.  It was so popular that the cheese was often taken onward to the capital.  So when people asked what type of cheese it was, it was always referred to as Stilton. 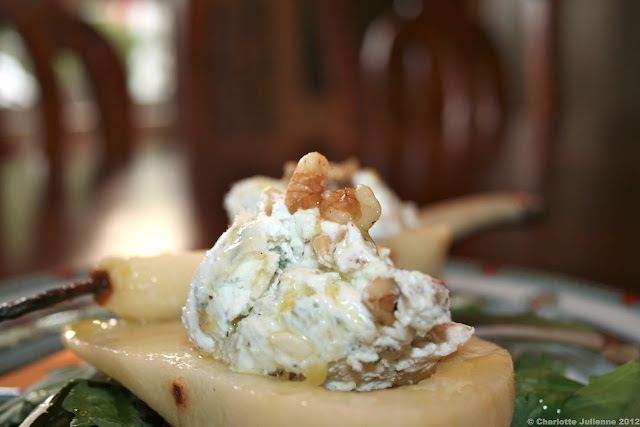 This recipe is so easy.  We took Stilton cheese, goats cheese, heavy cream, toasted walnuts, salt and pepper and combined them in a food processor.  We then took that mixture and popped it in the fridge for a couple of hours so all the flavors would meld together.
We then sliced our pears in half lengthwise and removed the core.  The pears were placed in a bowl with ice water and lemon juice.
They were then placed atop a bed of lettuce and stuffed with the cheese mixture and topped with walnuts.  We made a simple vinaigrette and drizzled it atop the entire dish.
It was light and yummy.  So good for these super hot days we have been having in New England.