I like to think I’m a big believer in fate.  Sometimes I believe that everything happens for a reason. Other times, when the “everythings” are not so good, I question what the reason could possibly be and then start pondering things again.  For the most part, the things in my life seem to have fallen into place because of the events before them.  So most of the time…I can go with this general philosophy.

One morning I was scrolling through Facebook and stumbled upon a photo of a house crumbling into the water.  Like most of the art I’m drawn to, it was sad but stunning.  It reminded me of the feeling I had the first time I saw Buglisi-Foreman’s Suspended Women in 2001 at Jacob’s Pillow in Becket, Massachusetts.   The women in this gorgeous modern dance called to me.  They seemed to be drowning but at the same time stuck in time.  I felt as though they were living and reliving their fate under the water on a lost ship.  So seeing the photo of this crumbling house piqued my curiosity enough to click the link- something I usually don’t do due to time constraints.  I wanted to know about it.  Where was it? Why was it crumbling? Who had inhabited it? It was one of the most beautiful images I have ever seen.  I took the time to read the story posted in Newsweek about Holland Island off the coast of Maryland where the rising waters and eroding soil started sinking the island in the early 1900’s.  It went on to talk about the nearby Smith Island potentially suffering the same fate.  I didn’t think much more of it.  I got the kids on the bus and went on with my day.

My first stop was the library in town where the winter book sale was kicking off.  I can’t keep away from used books.  I’m like a magnet to them.  I was in search of cookbooks for our growing collection.  On the first day of a book sale you have to have your game face on.  There are generally lots of people hoping to find books to resell.  I just wanted to find a few books we didn’t have.  Bargains, because really paying full price for a book seems sadly unnecessary these days.  My arms were full by the time I was rounding the aisle corner to see the other side of the table when I noticed a small box of books tucked under the table on the floor.  The only thing better than the stack of books in my arms was the potential within the box no one else had rummaged through yet tucked away on the floor.  And that is when fate stepped in.   A tiny little hardcover book all in black and white called Mrs. Kitching’s Smith Island Cookbook.  A book I would have, any other day, left in that box rather than paying one dollar for it.  A book I would not have recognized or cared to look at because most small town cookbooks of that nature are really only interesting to me if I have been to that small town.  But on this day, the day I became fascinated with a stunning image and the story behind it, its story was presented to me again.

This recipe is from this tiny little cookbook.  Written by Frances Kitching and Susan Stiles Dowell, published in 1981, it is a seasonal cookbook, arranging itself into four sections.  The book itself is based on recipes from Mrs. Kitching’s Inn.  Mine had a little pamphlet tucked inside about cruising to the island.  It made it all the more charming.  What I love about the book is that it tells stories and histories of the island and the people.  I’m completely fascinated with it.

2 tablespoons powdered sugar plus more to roll cookies in

Begin by creaming the butter and sugar.  Add the water and vanilla.  Add the flour and pecans and combine until the mixture is uniform.  Form small balls by rolling the pieces in your hands.  Bake at 300 f. for 20 minutes.  When the cookies are cool enough to touch, roll them in the remaining sugar.

Really, these are not very different from an Italian or Mexican Wedding Cookie.  They will be a big hit in our house because they are not overly sweet.   They are dense and crumbly.  You need a glass of milk or tea to eat more than one.  Like all the cookie recipes we make, we doubled this and froze half of the rolled dough.  It makes it possible for any day to be a cookie day.  Now we just need to plan that trip to Smith Island before it crumbles into the sea. 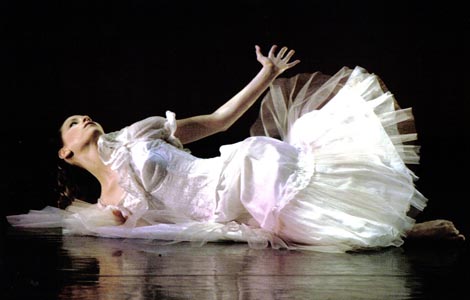 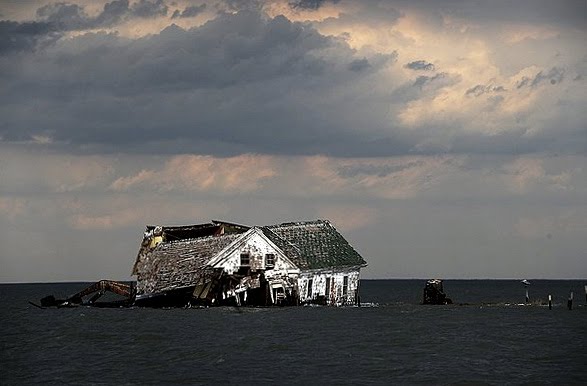 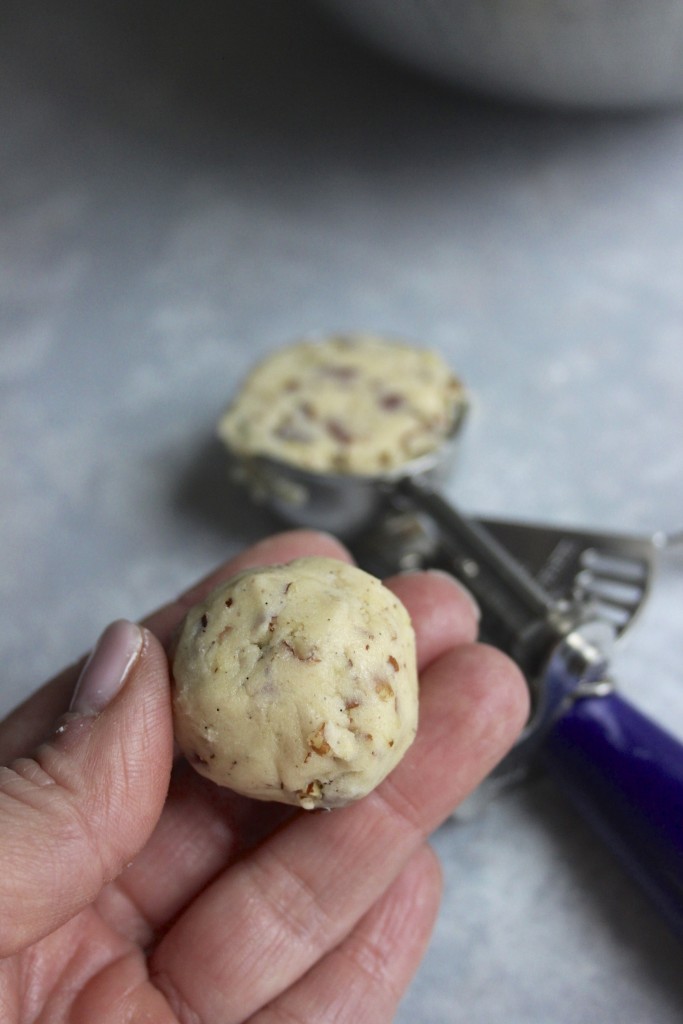 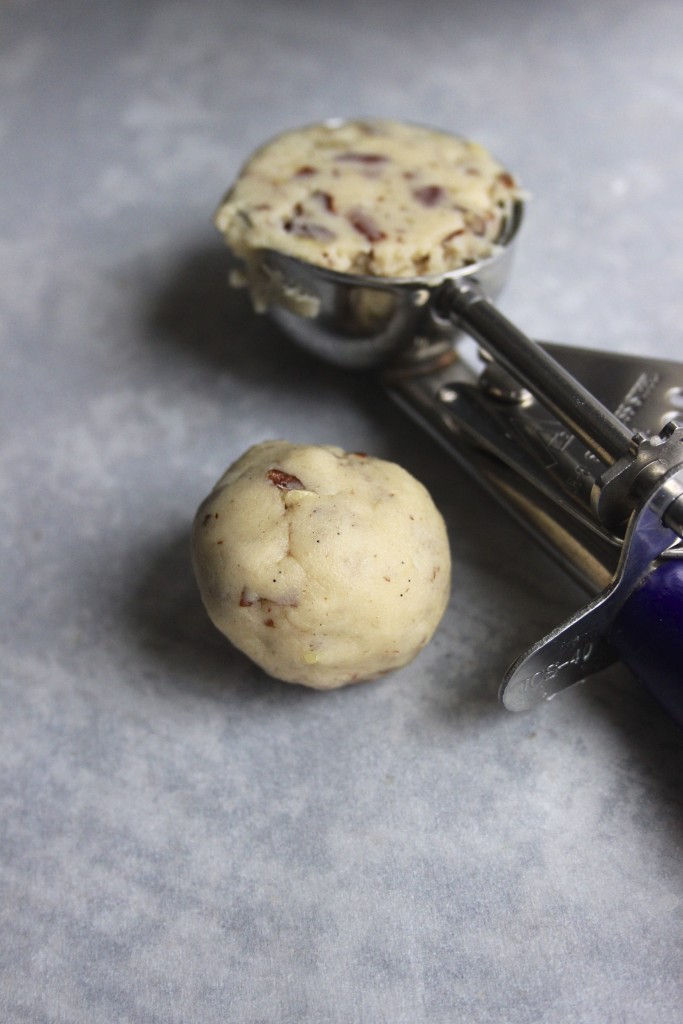 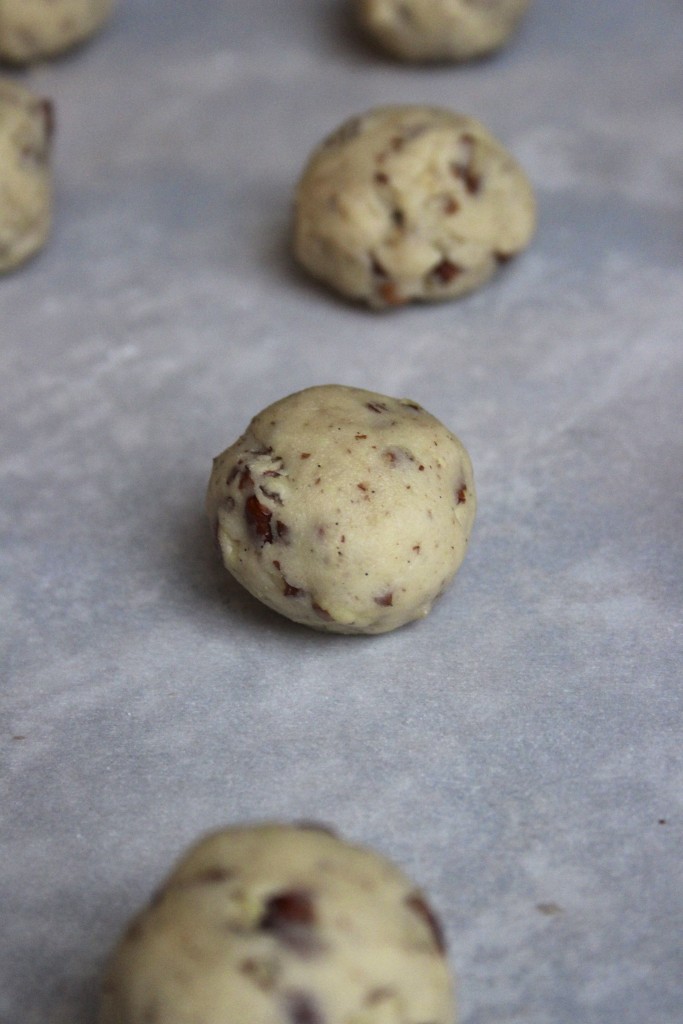 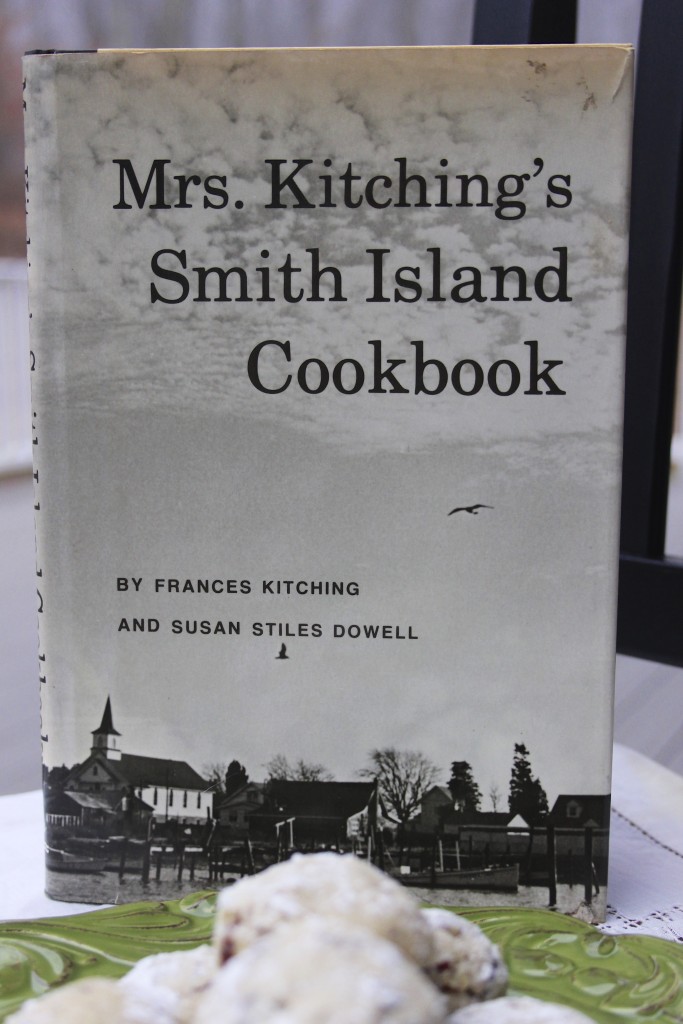 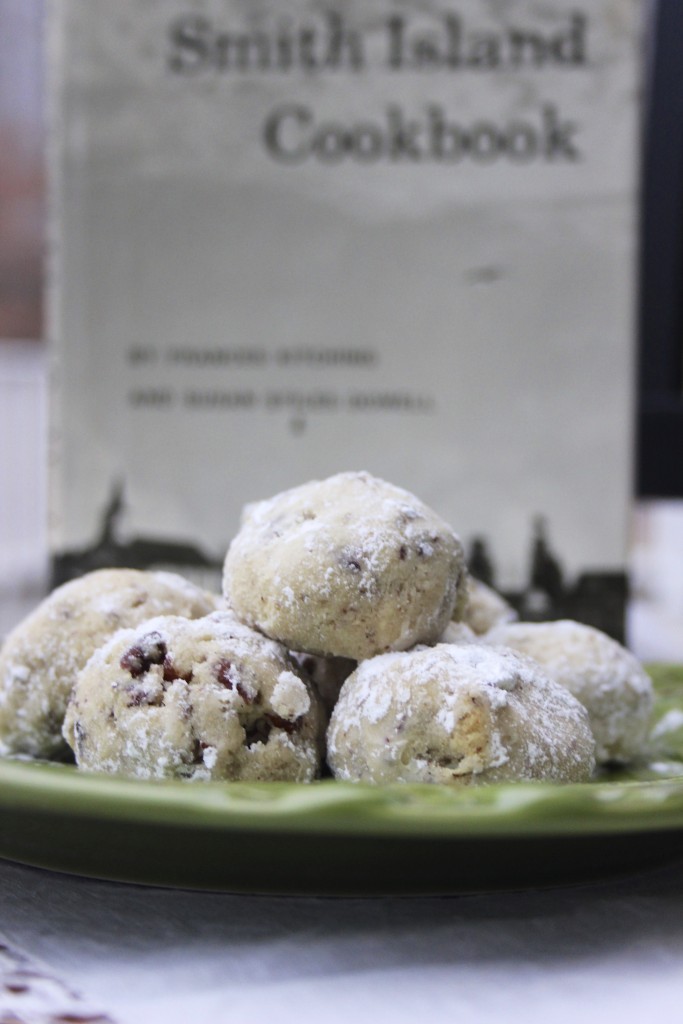 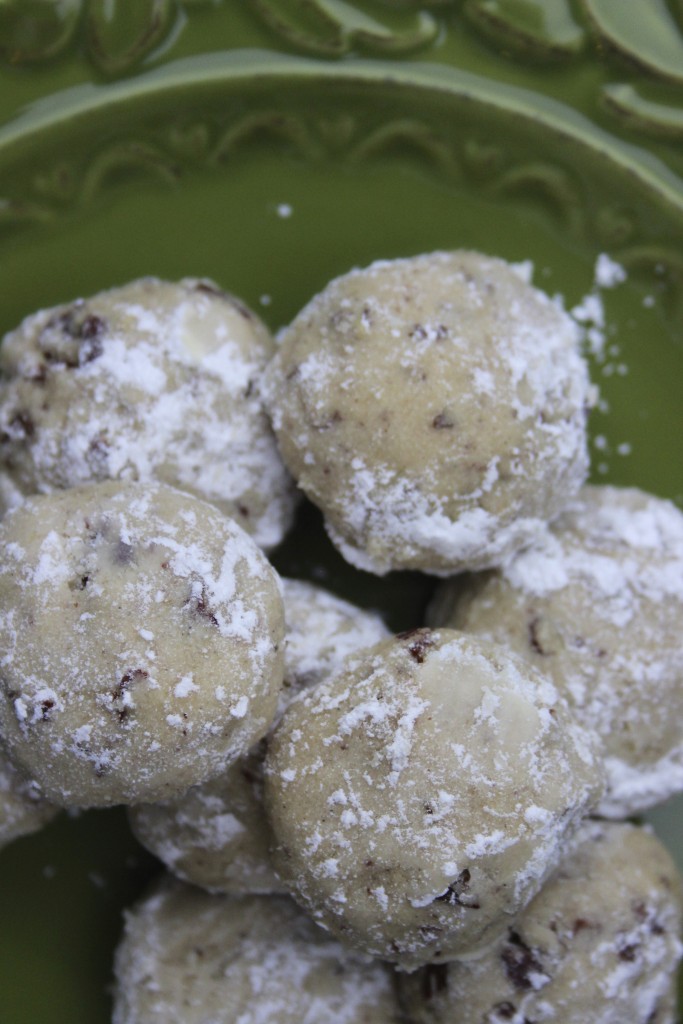 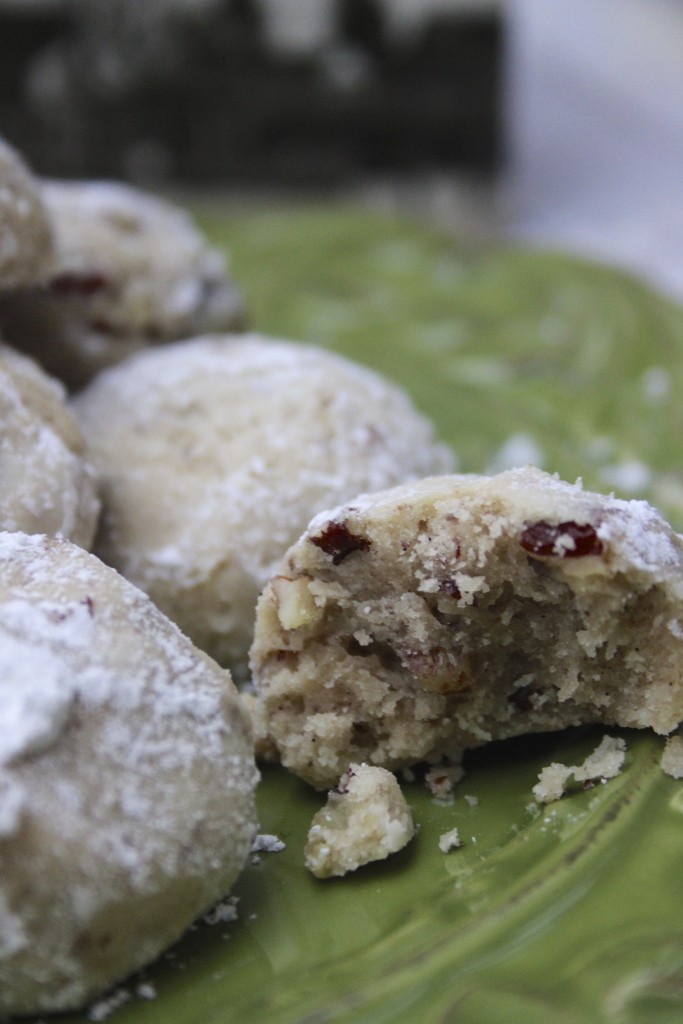