You might have noticed that we are a little obsessed with serving things on toast this week.  We have been busy and it is just an easy fix for supper.  Coronation Chicken is a very British dish that has a Royal history.  It quickly has become popular with friends and family in the States.
It was invented by Rosemary Hume (founder of the Cordon Bleu school).  The original was created to celebrate the coronation of Queen Elizabeth II and, at the time, was given the French name “Poulet Reine Elizabeth”.  Although the original was a little more complicted than the recipie we will show you, it caught on with the British who were still in the grip of WWII rationing at the time.
Take some mayonaise and mix in some curry powder, tumeric and a squeeze of lime juice then season with a little salt and pepper.
Mix the curry mayo with chilled and chopped chicken, diced celery and a few golden raisins.
Place in a bowl and sprinkle a little curry powder and cilantro /corriander leaves on top then serve as a salad, with some toast, or as the filling for a sandwich. 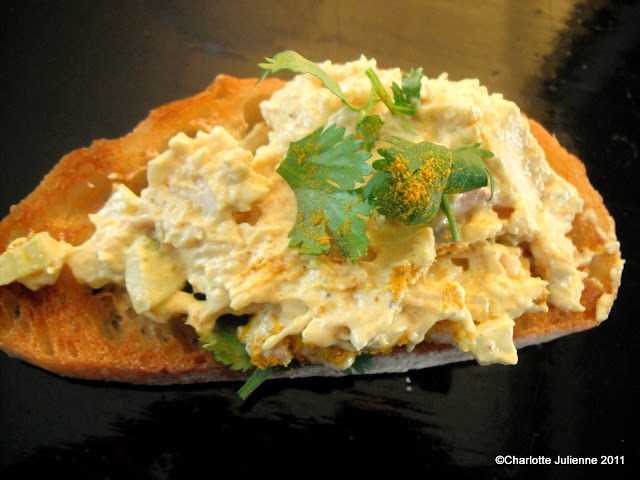